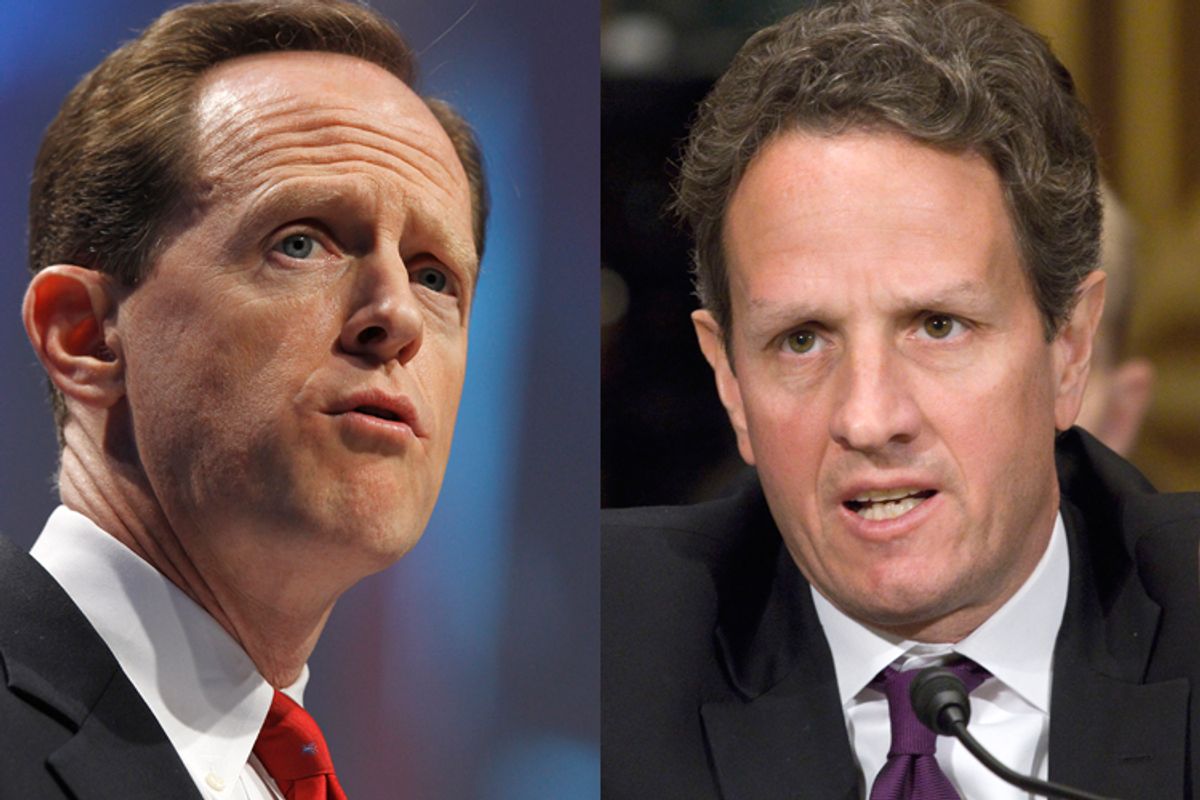 Senator Pat Toomey, R-Pa., proposed an interesting theory on Friday: It's Treasury Secretary Tim Geithner's fault if a failure to raise the debt ceiling results in the U.S. defaulting on its bond obligations.

Toomey reasons that Geithner has the freedom to pick and choose what debts the U.S. should pay. Since just about everyone agrees that defaulting on bond payments would precipitate a major international economic crisis, possibly kicking of another recession, and end the dollar's preeminent status as the world's preferred reserve currency, Toomey believes that Geithner should simply choose to pay those debts first and stiff other creditors, like, for example, Americans getting unemployment benefits or Social Security checks.

"... the Treasury secretary himself has the discretion to decide which bills to pay first in the event that a cash flow shortage occurs. Thus, it is he who would have to consciously, and needlessly, choose to default on our debt if the debt ceiling is not promptly raised upon reaching it. It takes a lot of chutzpah to preemptively blame congressional Republicans for a default only he could cause,"Toomey said.

He said that Geithner has argued foolishly that failing to pay welfare payments or furloughing workers would send bad market signals that are equivalent to a default.

Foolish? Here's what Deputy Secretary Treasury Secretary Neal Wolin said in a statement in January, in response to Toomey's announcement that he planned to introduce legislation which would require Treasury to make interest payments on its debt the first priority in the event of a failure to raise the debt ceiling.

"[T]his idea is unworkable. It would not actually prevent default, since it would seek to protect only principal and interest payments, and not other legal obligations of the U.S., from non-payment. Adopting a policy that payments to investors should take precedence over other U.S. legal obligations would merely be default by another name, since the world would recognize it as a failure by the U.S. to stand behind its commitments."

Doesn't sound all that foolish to me. As explicitly suggested by the recent decision by Standard & Poor's to change the U.S. credit outlook from "stable" to "negative," financial markets are nervous that political gridlock might prevent Washington from taking the necessary action to address its long-term fiscal situation. If a failure to raise the debt ceiling results in the United States failing to make Social Security payments -- or any other statutorily required payments to U.S. citizens, the markets are unlikely to respond favorably.

And that doesn't remotely take into account the political chaos that will break out if the Treasury privileges paying interest payments on debt owned by the Federal Reserve, China, and Japan over the social safety net. It's really hard to imagine a stupider strategy: Stop paying unemployment benefits while doing everything you can to start another recession.