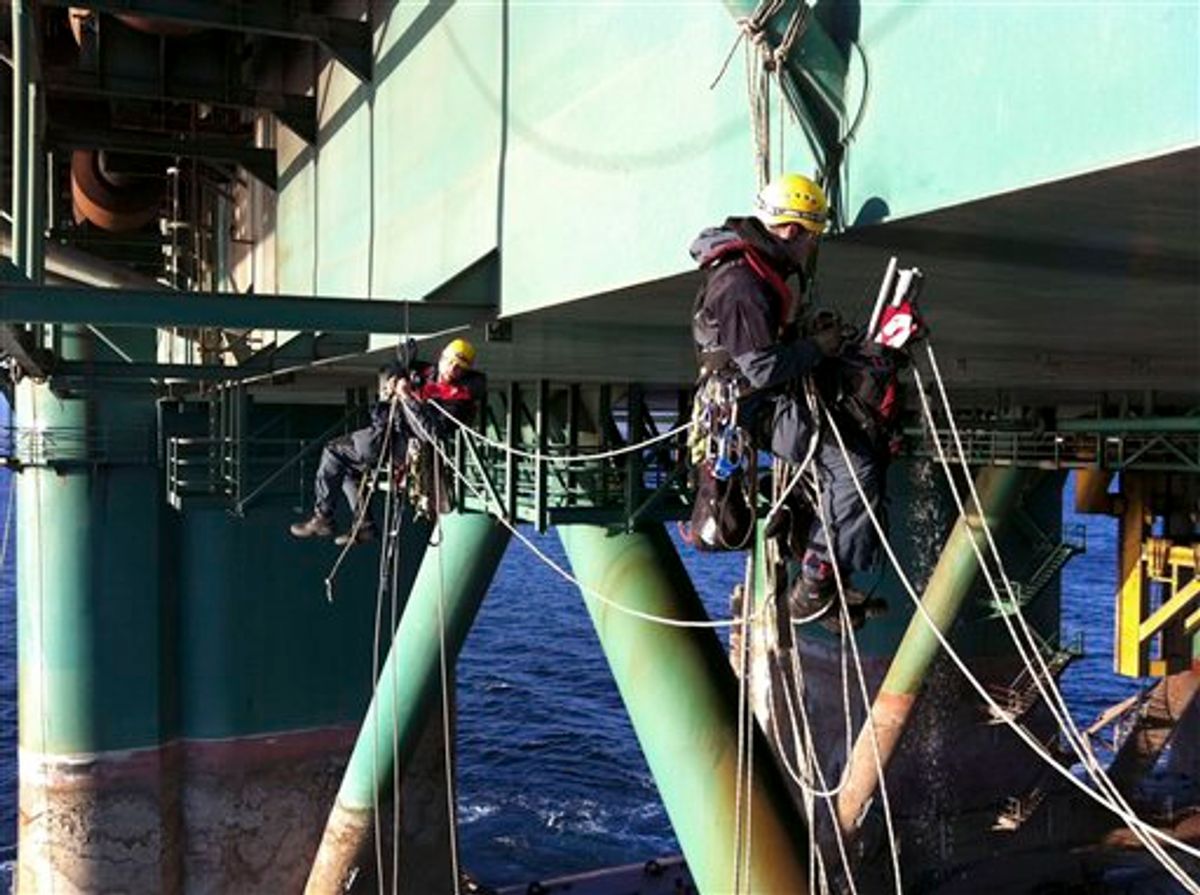 In this photo dated Friday, April 22, 2011 provided by Greenpeace, activists climb aboard the oil rig Leiv Eiriksson to prevent its departure for Greenland to begin drilling in the Arctic, in the Sea of Marmara near Istanbul, Turkey. The environmental group said Friday activists used speedboats to intercept and climb aboard the Leiv Eiriksson as it left Istanbul and were prepared to occupy the rig for days. (AP Photo/Greenpeace, HO) NO SALES (AP)
--

Greenpeace activists climbed aboard an oil rig off Istanbul on Friday in a bid to prevent it from reaching Greenland to begin deep-water drilling in the Arctic, but the vessel continued on its course undeterred.

The environmental group said eleven activists, some in rock-climbing gear, used speedboats to intercept and then climb atop the Leiv Eiriksson at dawn, after it had left a port in Istanbul. They climbed the rig's derrick, unfurling a banner that read: "Stop Arctic destruction" and "Go Beyond Oil, Choose Clean Energy."

The huge platform, bound for Greenland's Baffin Bay, did not stop and continued on its course, crossing through the Dardanelles strait and heading toward Greek waters, Deniz Sozudogru, a Greenpeace spokeswoman for the Mediterranean region, told the Associated Press.

She said six activists left the oil rig on speed boats as it crossed the Dardanelles, but five were still on board. The Dardanelles connects the Sea of Marmara to the Aegean.

The remaining activists had sufficient supplies to occupy the rig for days, according to the group. It said the oil rig, operated by Scottish company Cairn Energy PLC, has "a very short window in which to drill their four new exploratory wells" due to extreme weather conditions in the Arctic.

"It is inconceivable that Leiv Eiriksson's operators, Cairn Energy, can recklessly plow on into the freezing waters of the Arctic with our climbers still on board," Greenpeace campaigner Ben Ayliffe said in a statement. "At some point Cairn will have to stop this rig."

Cairn Energy on Friday confirmed an "incident" involving Greenpeace off Turkey's coast and said the vessel was continuing "in transit to take part in Cairn's 2011 exploration program in Greenland."

The company said in a statement it was operating at the invitation of Greenland's government and had successfully drilled three wells there in 2010.

"Wherever it is active, Cairn seeks to operate in a safe and prudent manner," the statement said, adding, "Cairn respects the rights of individuals and organizations to express their views in a safe manner."

Greenpeace wants Cairn to suspend deep-water drilling after the spill in the Gulf of Mexico.

"Freezing temperatures, severe weather and a highly remote location pose unprecedented challenges to any oil spill response in the Arctic and mean a spill could be impossible to contain and clean up," Greenpeace said in a statement.

Leiv Eiriksson, one of the world's largest rigs, had been exploring possible oil and gas in the Black Sea under a joint venture between Turkey and Brazil's Petrobas.