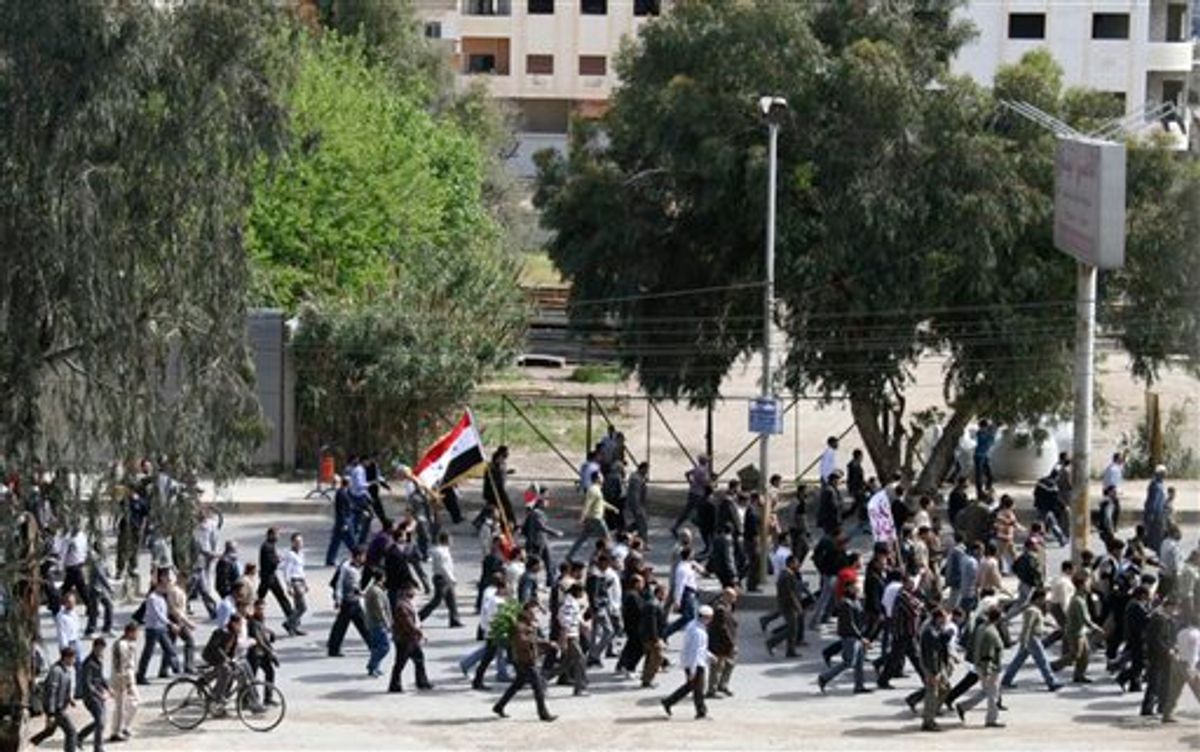 Syrian security forces fired live bullets and tear gas Friday on pro-democracy demonstrations across the country, killing at least 27 people -- including a young boy -- in one of the bloodiest days of the uprising against President Bashar Assad's authoritarian regime, witnesses said.

Protesters flooded into the streets after Muslim prayers in at least nine major areas across the country, a sign that Assad's attempts to quell the monthlong protests with a deadly crackdown and promises of reform have all but failed.

"Bullets started flying over our heads like heavy rain," said one witness in Izraa, a southern village in Daraa province, the same region where the uprising kicked off in mid-March.

The protest movement has been the gravest challenge against the autocratic regime led by Assad, who inherited power from his father 11 years ago in one of the most rigidly controlled countries in the Middle East.

The uprising in Syria takes its inspiration from the popular revolts sweeping the Arab world. But there are significant differences in Syria that make the protest movement there all the more unpredictable.

The country's military structure is one key difference -- unlike the armies of Tunisia and Egypt, Syria's military and security apparatus will almost certainly stand by Assad, at least for the time being.

That means there could be darker days ahead as the uprising gains momentum, something that has implications far beyond Syria's borders. Damascus stands in the middle of the most combustible conflicts in region because of its web of allegiances, from Lebanon's Hezbollah and Shiite powerhouse Iran.

On Friday, tens of thousands of people were protesting in the Damascus suburb of Douma, the central cities of Hama and Homs, Latakia and Banias on the coast, the northern cities of Raqqa and Idlib, the northeastern Kurdish region, and the southern province of Daraa, where the uprising kicked off in mid-March.

As the protesters dispersed, the scope of the bloodshed began to emerge.

Outside the capital, witnesses said they saw at least five corpses at the Hamdan hospital. All suffered gunshot wounds.

In the southern province of Daraa, other witnesses said at least 10 people were killed when protesters marched in front of the mayor's office in Izraa. They said an 11-year-old boy was among the dead.

"Among the dead was Anwar Moussa, who was shot in the head. He was 11," said the witness.

A video posted on the protest movement's main Facebook page showed a man carrying a bloodied boy near a building as another child could be heard weeping and shouting "My brother!"

Ammar Qurabi, head of Syria's National Organization for Human Rights, said another nine were killed in Hajar Aswad near Damascus and three killed in the central city of Homs.

Friday's witness accounts could not be independently confirmed because Syria has expelled journalists and restricted access to trouble spots. Witnesses spoke on condition of anonymity for fear of reprisals.

The protest movement has crossed a significant threshold in recent days, with increasing numbers now seeking the downfall of the regime, not just reforms. The security crackdown has only emboldened protesters, who are enraged over the deaths of more than 200 people over five weeks.

Activists promised that Friday's protests will be the biggest rallies yet against the regime led by Assad, who inherited power from his father 11 years ago in one of the most authoritarian countries in the Middle East.

The president has been trying to defuse the protests by launching a bloody crackdown along with a series of concessions, most recently lifting emergency laws that gave authorities almost boundless powers of surveillance and arrest.

But many protesters said the concessions have come too late -- and that Assad does not deserve the credit.

"The state of emergency was brought down, not lifted," prominent Syrian activist Suhair Atassi, who was arrested several times in the past, wrote on her Twitter page. "It is a victory as a result of demonstrations, protests and the blood of martyrs who called for Syria's freedom."