After vowing to confront Beltway corruption, the new faces in Congress revert to business as usual 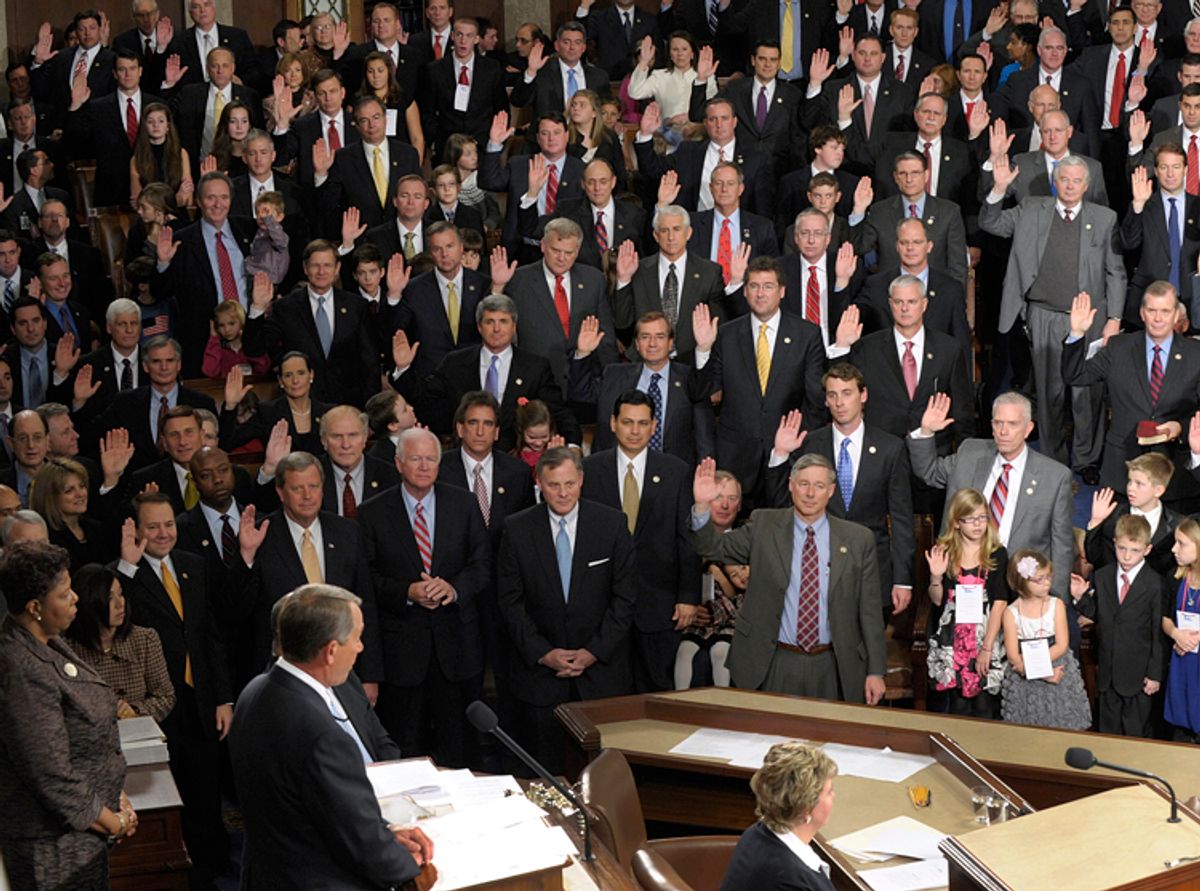 House Speaker John Boehner of Ohio delivers the oath of office to Republican members of the House of Representatives during the first session of the 112th Congress, on Capitol Hill in Washington, Wednesday, Jan. 5, 2011. (AP Photo/Susan Walsh) (Susan Walsh)
--

Remember that scene in "Mr. Smith Goes to Washington" when Jimmy Stewart arrives in the capital for the first time? The freshman senator shakes off his handlers in Union Station and jumps onto a sightseeing bus, eager to see all the statues and monuments honoring the greats of American history.

"I don't think I've ever been so thrilled in my life," he says afterward. "And that Lincoln Memorial -- gee whiz! Mr. Lincoln, there he is. Just looking straight at you as you come up those steps. Just sitting there like he was waiting for somebody to come along."

For all their talk of the Founding Fathers, the Constitution and core principles, you'd have thought that the current freshman class of Congress, the sprouted seed of Tea Partyers and the 2010 midterms, would have made a similar tour their first priority on arrival. And for all I know, many of them did just that. But for some, the siren song of cash and influence has proven stronger, already luring them onto the rocks of privilege and corruption that lurk just inside the Beltway. They've made a beeline not for the hallowed shrines of patriots' pride but for the elegant suites of K Street lobbyists, where the closest its residents have been to Lincoln is the bearded face peering from the $5 bill -- chump change. So much for fiercely resisting the wicked, wicked ways of Washington. These new members were seduced faster than Dustin Hoffman in "The Graduate."

In an April 2 editorial, the New York Times reported:

Since last year's Republican victories, nearly 100 lawmakers have hired former lobbyists as their chiefs of staff or legislative directors, according to data compiled by two watchdog groups, the Center for Responsive Politics and Remapping Debate. That is more than twice as many as in the previous two years.

In that same period, 40 lobbyists have been hired as staff members of Congressional committees and subcommittees, the boiler rooms where legislation is drafted. That again dwarfs the number from the previous two years. While some of those lobbyist-staffers were hired by Democrats, the vast majority are working for Republicans... In many cases, those hiring lobbyists were Tea Party candidates who vowed to end business as usual in Washington.

The revolving door between government and lobbyists has never spun faster. Then there's this, from Wednesday"s Washington Post:

Many of the Republican freshmen in the House won election vowing to shake up Washington, so it's a little surprising that many of them seem to be playing an old Washington game: raising much of their campaign money from corporate political action committees.

More than 50 members of the class of 87 GOP freshmen took in more than $50,000 from PACs during the first quarter of 2011, according to new campaign disclosure reports filed with the Federal Election Commission. Eighteen of the lawmakers took in more than $100,000.

For example, freshman star Kristi Noem of South Dakota -- one of the two newbies anointed as liaison to the Republican House leadership -- raised $169,000 in PAC money, including cash from General Electric, Boeing, Raytheon, Wells Fargo, Fedex, AFLAC, Altria (the parent company of Philip Morris and Kraft Foods) and pharmaceutical giants Bayer and GlaxoSmithKline.

According to the nonpartisan Sunlight Foundation, Rep. Noem, who pledged to voters not to make Washington her home, held at least 10 fundraisers in D.C. during that first quarter, her first months as a member of Congress. They included two dinners at the Capital Grille, at which attendees donated between $1,500 and $2,000 apiece, and lunch at We, the Pizza on Pennsylvania Avenue.

A CQ MoneyLine study reports that during the first three months of the year the 87 Republican freshmen pulled in a total of $14.7 million from individuals as well as PACs. Leading the crowd was Diane Black of Tennessee with $926,000, but more than two-thirds of it was her own money. In second place was West Virginia's David B. McKinley, with $540,000.

Rep. McKinley was one of nine new GOP members spotlighted this week by the website Politico as members who have done things "the Washington way, using a legislative process they once railed against to try to assist donors, protect favored industries or settle scores with their political enemies."

Three weeks after his swearing in, McKinley introduced a bill to overturn an Environmental Protection Agency ruling that vetoed an Army Corps of Engineers water permit for mountaintop mining, the practice that blasts the tops off mountains and sends debris raining down on communities, streams and rivers. The bill has ramifications for the entire mining industry, but the specific mine in question is owned by Arch Coal. Its PAC contributed $2,500 to McKinley's 2010 election campaign and another thousand so far this year.

The mining industry was McKinley's largest corporate campaign contributor -- $51,751. And a month after he took office, Politico reported, he introduced another bill "that would block a proposed EPA regulation against coal-ash bricks and drywall, materials architectural and engineering firms -- such as one founded by McKinley -- routinely recommend in construction project bids."

Others cited by the Politico investigation include freshmen Bill Johnson of Ohio and Morgan Griffith of Virginia. They, too, have been going to bat for mine executives. The mining sector was Johnson's biggest corporate donor at $25,146; same with Griffith, who received $40,450.

Texas freshman Bill Flores has been going after the Interior Department's procedures for offshore oil drilling permits, trying to get the department to impose tighter deadlines and pay back billions in leasing rights to oil companies whose permits are denied. He's the former president and CEO of an exploratory oil firm. Its employees were his second largest campaign contributor and the oil and gas industry threw in more than $200,000.

In rebuttal, the office of each congressman has generated the appropriate, high-minded spin. "West Virginia is coal, and coal is West Virginia," said McKinley's spokeswoman. "He's doing what he said he would -- fighting tooth and nail to stop the EPA's war on coal ..." Rep. Flores told Politico, "This is an issue that is very important to me as I have been involved in finding solutions to America's long-term energy independence for the last thirty years."

And so it goes. At this rate, if the Abraham Lincoln so venerated by the idealistic Mr. Smith is still at his memorial hoping for someone to come along, someone with integrity and dedication to the people and not the almighty dollar, he's going to have a long wait.

The new dogs have learned the old tricks of Capitol Hill with remarkable speed, and their big business masters, armed with their Supreme Court-sanctioned ability to throw bottomless bags of money around, have more control of the leash than ever.

Michael Winship, senior writing fellow at Demos and president of the Writers Guild of America, East, is former senior writer of "Bill Moyers Journal" on PBS.