What I learned waiting for my prince

Like Kate Middleton, I spent years wondering if my guy would commit. It turns out all the anxiety was worth it 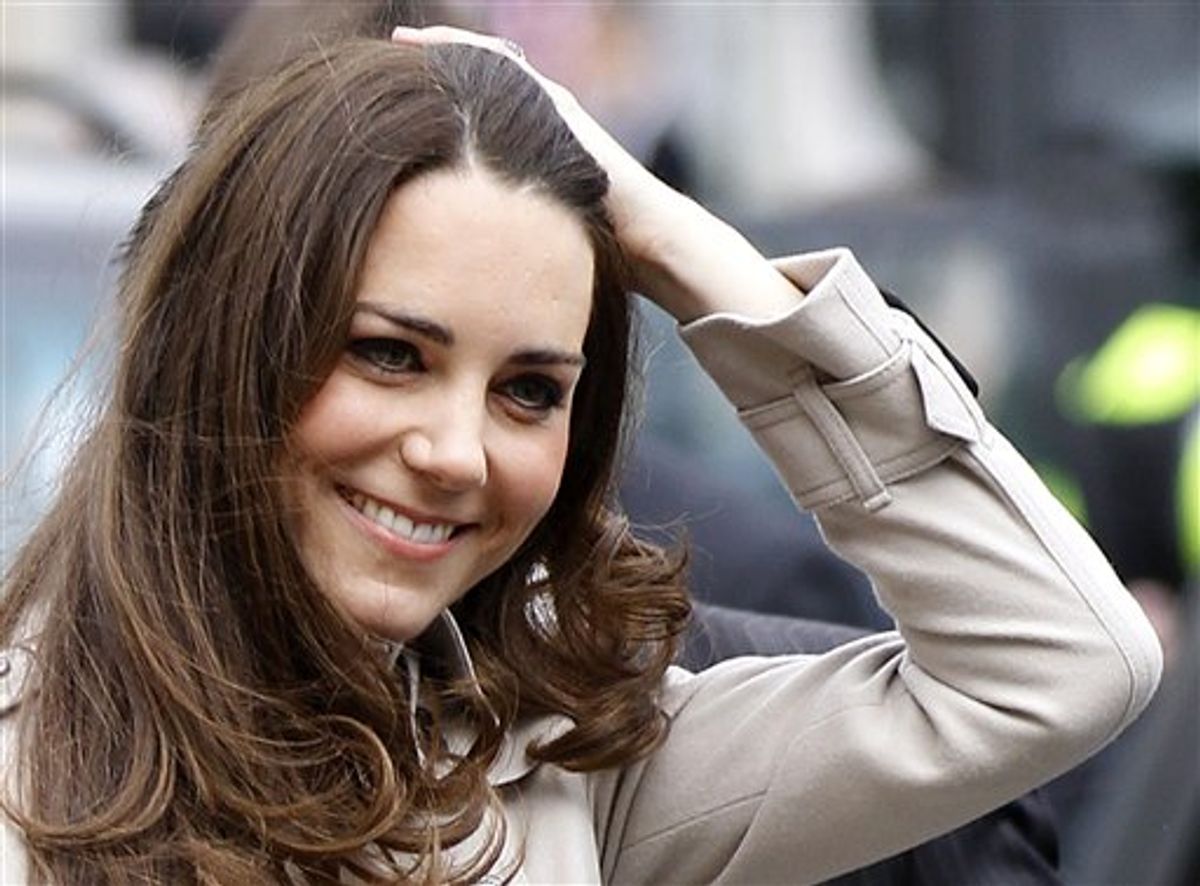 Kate Middleton smiles as she arrives at City Hall in Belfast, Northern Ireland, Tuesday March 8, 2011. Police kept watch from the rooftops for a visit by Britain's Prince William and his fiance, that brought the center of Belfast to a standstill. Some 50 to 100 people gathered in the bright sunshine near the imposing city hall to greet the couple, who arrived in a convoy of five black Range Rovers, but the crowd swelled to several hundred as shoppers realized something special was happening.(AP Photo/Peter Morrison) (AP)
--

Looking at us, you'd never guess Kate Middleton and I have anything in common. She's a gorgeous and glamorous 29-year-old daughter of millionaires who's about to marry the second-in-line to the British throne. I'm an ordinary middle-aged American career woman whose life and looks mostly go unremarked.

But the future Queen Catherine and I share something that we could no doubt discuss over tea: We both waited years for the men in our lives to commit to us. Our mutual theme song might be, "Someday my prince will come … around."

Famously dubbed "Waity Katie" by the British tabloids, Kate Middleton met her match in college and has spent nearly a third of her young life in romantic limbo. Always a late bloomer, I didn't meet mine until age 41, and then had to wait several years for the "prince" I'd chosen to choose me back.

After 25 years of dating, including more than 200 men I met through the personal ads, I had only a handful of failed relationships to show for my efforts. So when I met a man who seemed to be everything I'd been hoping for, I knew the rareness of what I had found. Unfortunately, while I was achingly eager to move into the next phase, my prince was in that proverbial "different place" in his life. A few years post-divorce, he was preoccupied with raising his son, as well as tending to his career, and had been dating sparingly and warily. He had no desire to marry again or even live with a partner, and was frank about his fear that we wanted different things.

Despite the suspicion that our desires were fundamentally incompatible, we became involved anyway. But for the first two years, I only saw him every other weekend. The rest of his time was focused on fatherhood and work. And it was five years before he even broached the idea that we live together, a suggestion that came the day after his son left home for college. Given the pace of things, it should have been no surprise that it took another two years to make cohabitation happen, as we tried and (fortunately) failed to buy a house during the real estate boom before giving up and renting our first shared home. The seven-year-itch milestone found us in a half-honeymoon state, each adjusting to living with a person we knew well and yet, in other ways, not at all.

I'd like to say that I waited all this out as graciously as Kate Middleton has been praised for doing -- although one assumes that, like me, she had loyal (and tight-lipped) friends whose shoulders she cried on. But I regularly initiated what couples therapists call "our relationship talks" about how frustrated I was that we weren't moving toward sharing our lives more fully. Dozens of times, I decided to break things off, only to find myself melting when the honest confession of our incompatible desires would propel us to deeper intimacy and greater love. We'd sit and face each other saying, sadly, "This can't work," only to move our chairs closer together.

"Is it enough for you?" my women friends would ask with concern, often adding quickly, "It wouldn't be for me." Some worried that I was lingering in a relationship that couldn't give me what I wanted. But others sensed that something else was going on and encouraged me to be patient, as did the man in question. "Don't give up on me," he said more than once when I was looking at the door, a statement that came not as a manipulation or pathetic plea but as a simple suggestion, and a clue to what lay beneath the surface -- namely, a man who needed time, if I could spare it.

And in the end, that was what kept me going all those years. I realized that the issue wasn't pathological but situational: I was dealing with a man who committed to a profound degree and who, after going through a wrenching divorce, would not enter into a serious relationship again unless he could do so wholeheartedly.

I also had to acknowledge who I was: a woman who'd lived alone since her early twenties, who'd had to work through her own fears about relationships, and who was still half-terrified at the thought of partnership. If he'd suggested we live together in the first few years we knew each other, I might well have panicked and run away.

Instead, we each did a slow dance with our ambivalence that, while maddeningly frustrating at times, got us to where we are today, 12 years after we met -- partners in life. Last year, after much agonized deliberation, we finally made the greatest commitment a man and a woman can make together: We bought real estate in California.

OK, so Will and Kate are probably going us one better by marrying in front of the entire world, committing to a union that some have said cannot end in yet another royal divorce without threatening the future of the British monarchy (but hey, no pressure, kids!). As a child of one of the most public marriages in history, and as the son of a woman hounded to death by relentless fame, Will had ample reason to hesitate before offering the same Faustian bargain to the woman he loved. And perhaps Kate also held back, pondering the golden prison she'd be consigned to for the rest of her life.

The scale may be different, but all couples struggle with these same questions, wondering if what they'll lose in independence will be worth what they gain in love and intimacy. If you don't wrestle with that conundrum before you make a commitment, you surely will somewhere down the line. As much as it may feel like we've left those struggles behind, I don't assume that my partnership will last forever like a fairytale. Life happens, to both princes and the commoners who love them. That scaly-dragon ambivalence may yet have to be battled again, even if it currently lies sleeping in its cave.

What I have is today. Living in the first home I've ever owned, with a man I've loved for over a decade, I'm literally smelling the roses blooming outside our front door. I don't even mind that our house has dropped in value precipitously since we bought it, because I suspect we'll be here together for many years to come.

After all, can you imagine how long it will take us to agree that it's time to sell?