Why should the right monopolize religious rhetoric? A Christian moral vision for the other end of the spectrum 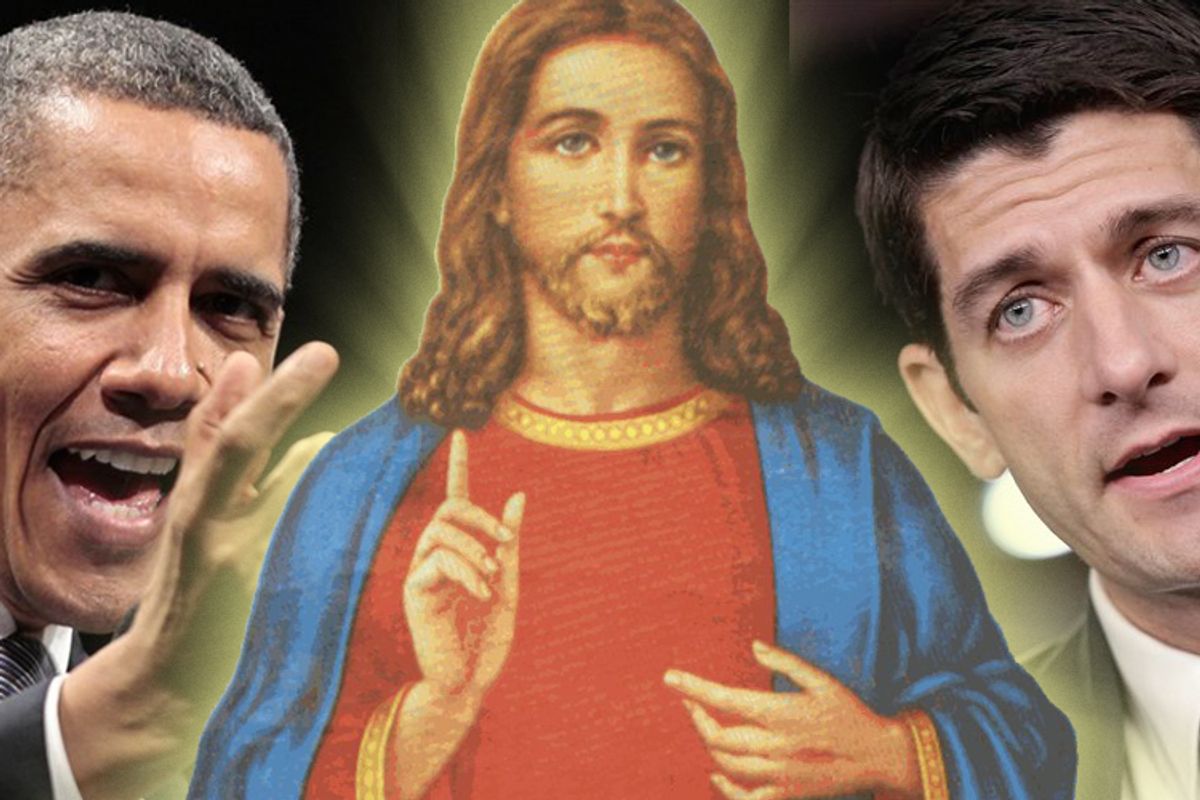 For the last generation, Americans have grown accustomed to evangelical Christianity aggressively entering the arena of public life to support a raft of conservative causes -- fights over the contents of school textbooks, battles against gay employment and marriage rights, anti-abortion activism -- all of it nudging the Republican Party further and further to the right.

It is, however, far less common to see Christian ideals -- or the ideals of any religion, for that matter -- harnessed to ideas or initiatives that originate on the political left. There are reasons for this. Offering a religious rationale for policy goals threatens what for many has become the cherished principle of secular rationalism in public life. Invoking a moral basis for public goals, to many otherwise well-intentioned liberals, undermines the separation of church and state, to which they reflexively seek to repel any threat. But this comes at the cost of chronically ceding the moral high ground and a potentially galvanizing force in national politics.

It’s refreshing, therefore, to see a group like What Would Jesus Cut? amid the partisan posturing surrounding debates over the federal deficit crisis. Launched by Jim Wallis, the co-founder and CEO of Sojourners magazine, this movement aims to infuse this critical national debate with thoughtfulness about the moral priorities it reflects. To deliver the message, the campaign sends What Would Jesus Cut? bracelets and emails to congressional representatives, and questions the limited pain of national belt-tightening the "super-rich" are asked to bear under the House Republican deficit-slashing plan.

Wallis correctly notes that recently passed tax cuts benefit ted this group, adding billions of dollars to the of burden future generations whose fiscal health the Republicans otherwise claim to defend steadfastly. He also points out that the GOP plan actually called for an $8 billion increase in defense spending, while cutting $758 million from Women, Infants, and Children, a program that provides nutrition for many of the nation’s neediest souls. Clearly, the What Would Jesus Cut? movement approaches the deficit dilemma by seeking to beat swords into plowshares.

Though its themes have been haltingly whispered before, the emergence of What Would Jesus Cut? represents the most viable, coherent and exciting vision for fastening a Christian moral vision to our national politics at the other end of political spectrum.

Wallis is no rookie in this quest. Beginning in the 1970s, Wallis turned Sojourners into a forum for ideas of social and economic justice. In the 1980s, at the height of the “Reagan Revolution,” its pages highlighted questionable national priorities in an era where spending on the privileged and on a robust military diminished domestic and social initiatives to benefit the poor. Wallis and Sojourners were also linked to the Central America Solidarity Movement, which mobilized Christian faith to counter the destructive collateral damage of Reagan administration policy in the region. Central America Solidarity in turn was linked transnationally to the burgeoning liberation theology movement in Latin America that harnessed the teachings of the Roman Catholic Church to the struggle for political and economic justice and against Latin America’s oppressive dictatorships.

There are signs that the 2010s could be a fertile ground for using Christian ideals to pursue goals of social justice. For one thing, in the run-up to the current deficit wrangling, Secretary of Defense Robert Gates, initially appointed on the Republicans' watch, acknowledged that there were areas of the defense budget that could stand trimming right alongside other measures of frugality in discretionary spending. This is a good bit of progress since the Reagan era attitude that defense was not a budget item subject to the same "spending arithmetic" as others.

If the moral test of a society is how it treats its most vulnerable, the emergence of What Would Jesus Cut? may be the flashlight leading us out of the dark cave of budgetary wrangling. But it should also provide progressives with a model for marrying religion to politics in a way that reinvigorates their agenda, rather than simply leaving the field wide open to often intolerant evangelicals and social conservatives.

Brad Martin is an associate professor of history at Bryant University in Rhode Island. He is the author of The Other Eighties: A Secret History of America in the Age of Reagan.