A shrine to young love

We asked readers to share evidence of their celebrity crushes. What they sent was sweet, silly -- and totally human 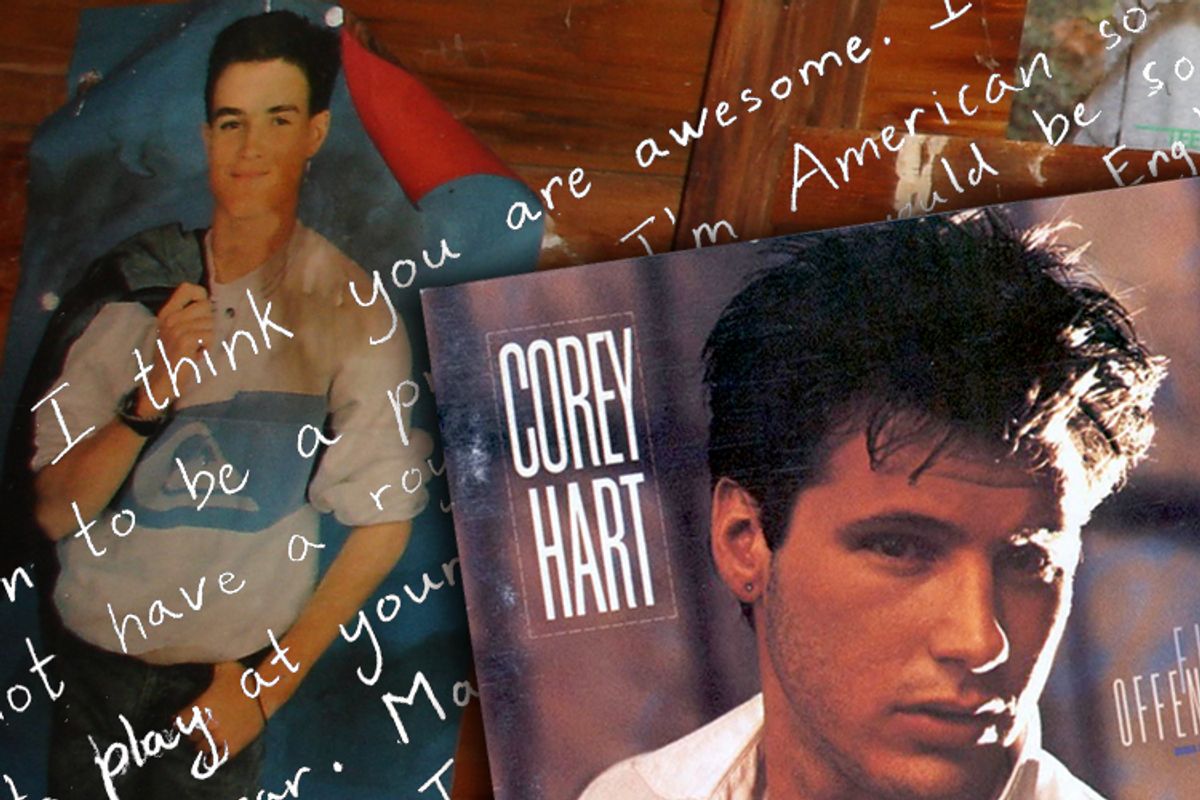 I received lots of great submissions in response to last week's call for evidence of childhood crushes -- but I also got something I hadn't anticipated: a reply from my first-ever celebrity crush. Rider Strong, he of mid-'90s "Boy Meets World" fame, caught wind of my article, in which I included the inspiration for the project: the discovery of an unsent letter I wrote to him at age 10. The missive featured naive enticements about my passion for pizza and cuddling by the fire, and requested that he "write back telling me when you will be near Berkeley, where exactly and what exact time." Strong, like the rest of the world, is on Twitter and 17 years after I wrote that letter, he sent me a message: "Soo...I like pizza too. I'll let u know when I'm in Berkeley. Exactly." I must have giggled for at least five minutes straight.

I wasn't the only one delighted by the exchange. Friends wrote me to say they were beside themselves, as though their own celebrity crush had just written to them. There was a similar giddiness in the submissions I received: People carry such tenderness and appreciation for young love in all its manifestations. Nothing illustrates that better than the story a reader named Liz shared of the "rustic (dilapidated) lakeside cabin in Northern Maine" that her uncle purchased. "After finalizing the purchase, he opened up the boathouse to find a shrine to childhood love, decorated with cut-out paper hearts and Teen Beat posters of Corey Haim and Trey Ames," she writes. "Appreciating this discovery for what it was, my uncle has left the boathouse untouched ... ." We worship at these shrines as kids and then again, out of wistfulness, as adults. How could we not delight in the memory of ourselves before all the rejection and heartbreak, the buildup of scar tissue. These childhood crushes take us back to a period of pre-disillusionment, filled with uncensored, extreme, idealistic longing. A great example of that is Lauren, now in her early 20s, who sent in a photo and blog post that document one of several times that she met Jimmy Fallon as a fanatical 13-year-old: All of a sudden, I turned and saw Jimmy! He told us that he just wanted to come outside to see the standby line and it was so nice of everyone to wait for tickets. I immediately ran the two feet over to him and said hi. He said hi and put his arm around me in a hug. ... The whole time I'm standing next to Jimmy in awe that he would come outside just to say hi. He could easily have just left through the 49th street side unnoticed, I mean he's had a long week I'm sure he was tired. But no, he just stood there talking with us. ... I must have told Jimmy about a hundred times how nice it was of him to come outside. ... I mean, how nice and perfect can a guy get? He definitely did NOT have to go outside but he did just to talk with the standbys. He's too much.

If only we were all seen through the aggrandizing eyes of a teenager in love. In classic youthful dramatics, Lauren adds at the end of the post: "Now I can die happy." I wonder how many times teenagers the world over have uttered a similar phrase. Of course, there is a dark "Romeo & Juliet" element lurking here -- take Seleana's teenage love poem to Davey Havok, the lead singer of AFI: A poem of love to Davey Havok

Enter the shadows where there is no light.
Blinded by darkness, you have lost your sight.
A sadness takes over, the tears you fight.
Afraid, overcome, you are taken by the night.

Suddenly you hear the most beautiful cries,
an angelic raven with tears in his eyes
Inspired by him, so deep and wise,
you begin to feel alive again and realize why.

This raven has saved you from suicide.
He sung his words, he did not lie.
Always there for me, he never did leave.
It is because of him that I still breathe.

That intensity can only be matched by the baser side of youthful crushes. Vincent writes:

In 1983 suburban Ohio, there wasn't really any easy way for a 14-year-old gay boy like me to get my hands on any gay porn. (It's probably better that I didn't have the internet back then -- I'd have never left my room.) So my visual, um, stimuli were pieced together from Calvin Klein ads in Rolling Stone, hand-written insanely over-the-top sex stories involving me and made-up strangers, and my record collection. Buying records would raise fewer parental eyebrows than wanting every new issue of Tiger Beat. So when I came home with Corey Hart's "First Offense" just about the first thing I did was cut his face out of the picture on the inner sleeve. I kept it under my mattress and it served me well many nights before sleep. Who knew teenage masturbatory material could be so darn cute! It's clear that the readers who sent in their personal artifacts treasured them and were massively eager to share. Even those without any actual physical evidence wrote in wanting to tell their story anyway. Not to get all New Age therapist on you, but relishing these documents -- whether they're our own or someone else's -- seems a way of loving the child inside. Most of us are still that sensitive little kid at our cores, even well into our older years. A man in his 60s sent me an email seeking advice; he wanted to know whether he should contact the girl who "swept [him] off [his] feet at the age of 16."

But my absolute favorite offering came from Eric, the result of a kindergarten assignment to write a letter to a famous person. "I've had a silly celebrity crush on Prince Harry as long as I can remember (though, for most of my life I didn't consider it a crush because I thought boys only liked girls)," he wrote. "It's odd though, that last sentence is rather prophetic considering I'm now an openly gay college student." That last line made me laugh until I cried. It brings to mind the Jesuit saying, "Give me a child until he is seven and I will give you the man." In other words: We aren't so different from who we were as kids. That's part of what is so exciting about discovering these personal artifacts buried under the material and emotional strata of life. In hindsight, this evidence takes on a whole new meaning. It becomes a sign of something essential and innate, the rough draft of who you are today; it's a blueprint that's only intelligible after the building is already finished.

These stories have the power to connect us to a basically good, and vulnerable, part of people. They provide a common denominator. I would so often think while reading these submissions: Aw, humans. Even celebrity objects of lust have their own all-consuming crushes -- they're human too, after all. That's a fact I was reminded of when Rider Strong later tweeted: "All jokes aside, a nice article. And just as weird for me to read." I bet. Just to bring things full circle, I suggested that he should submit evidence of his own childhood crush. The only physical testament he could offer up of his puppy love for actress Meredith Salenger was his "worn out" VHS of the Disney movie "The Journey of Natty Gann." He said, "I met her at 15 & could barely speak."