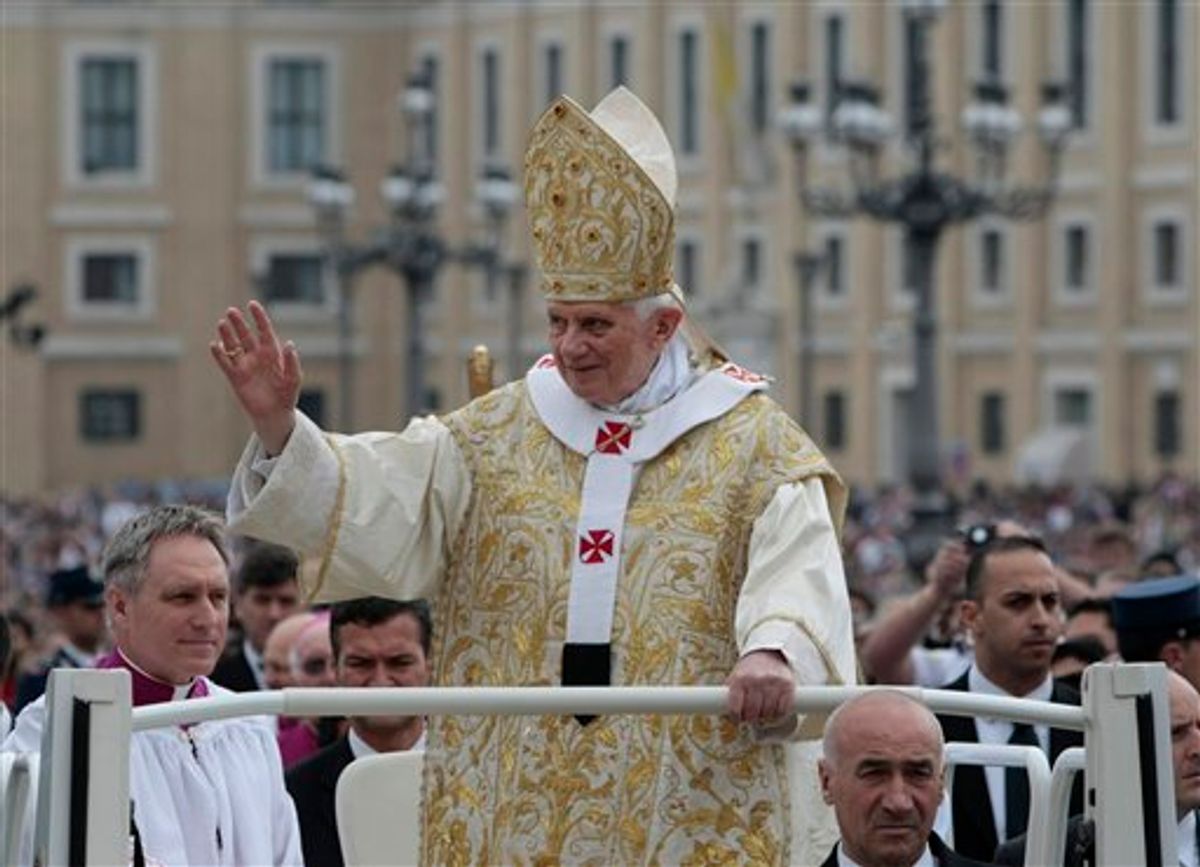 Pope Benedict XVI offered an Easter prayer Sunday for diplomacy to prevail over warfare in Libya and for citizens of the Middle East to build a new society based on respect.

He also called on Europeans to welcome refugees from North Africa.

"In heaven, all is peace and gladness. But, alas, all is not so on earth!" the pope lamented as he delivered the traditional "Urbi et Orbi" message from the central balcony of St. Peter's Basilica to a crowd of more than 100,000 that overflowed from St. Peter's Square.

"In the current conflict in Libya, may diplomacy and dialogue replace arms, and may those who suffer as a result of the conflict be given access to humanitarian aid," he said.

Referring to North Africa and the Middle East, the pope prayed that all citizens, especially young people, would "work to promote the common good and to build a society where poverty is defeated and every political choice is inspired by respect for the human person."

Uprisings, repression and civil warfare have triggered an exodus of people to Italian shores as well as other countries in the region. Europe has been split over whether to accept or deport tens of thousands of migrants, many of them from Libya and elsewhere in northern Africa.

Benedict rallied to the side of refugees, urging people of good will to "open their hearts to welcome them."

"Here, in this world of ours, the Easter alleluia still contrasts with the cries and laments that arise from so many painful situations: deprivation, hunger, disease, war, violence," said the pontiff, resplendent in gold-colored robes as he sat on a chair and read his speech in Italian.

This year, Easter fell on the same day in the Orthodox and Roman Catholic church calendars, and in Jerusalem, Orthodox and Catholics worshipped at the Church of the Holy Sepulcher, revered as the site of Jesus' Good Friday crucifixion and burial and of his resurrection on Easter Sunday. Protestants held their own ceremonies outside the walled Old City at the Garden Tomb, which some identify as the site of Jesus' burial.

In Cagliari, Sardinia, an Easter lunch of Sardinian cheese, pasta and lamb was served by Caritas, the Catholic charity, to some 20 Tunisians, the Italian news agency ANSA reported from the island. The diners were some of the more than 26,000 Tunisians who have clandestinely entered Italy since unrest in their homeland in January.

Most are waiting for temporary travel documents from Italy they hope will let them reach France, where many have friends and relatives. France has warned the Tunisians they will be sent backed unless they have jobs or savings to support themselves.

The dispute between Rome and Paris over the Tunisians' fate is expected to dominate much of an Italian-French summit in the Italian capital on Tuesday.

Appeals for solidarity like Benedict's are also "words for those who keep the doors closed" to the migrants, Monsignor Albert Mario Careggio, bishop of Ventimiglia, an Italian town near the French border, told Sky TG24 TV.

In Rome, the drama of society's unwanted played out in one of the city's major basilicas, where some 150 Gypsies have taken refuge from city officials who are dismantling illegal Roma trailer settlements. The Gypsies say City Hall will split their families by sending women and children to a shelter in a Rome suburb but not men.

In a sign of Easter solidarity, several dozen Romans brought food, diapers and milk for babies to the improvised refugee camp inside St. Paul Outside the Walls basilica.

The 84-year-old Benedict's voice cracked at times during the Mass, but he ended his two-hour appearance Sunday by reading aloud holiday greetings in 65 languages.

Some 41,000 potted plants lined the square, including 10,000 narcissus plants, many of them in yellow and white, the official Vatican colors, arranged in neat, rows up the slope toward the altar.

Benedict returns to the square in a week to lead a crowd expected to be at least double Easter's turnout when he beatifies John Paul, putting the Polish-born, long-serving pontiff on the last formal step before eventual sainthood.

Alba Tobella in Vatican City, Paolo Santalucia in Rome, Saad Abdul-Kadir in Baghdad, and Raf Casert in Brussels contributed to this report.