Taliban tunnels more than 480 out of Afghan prison 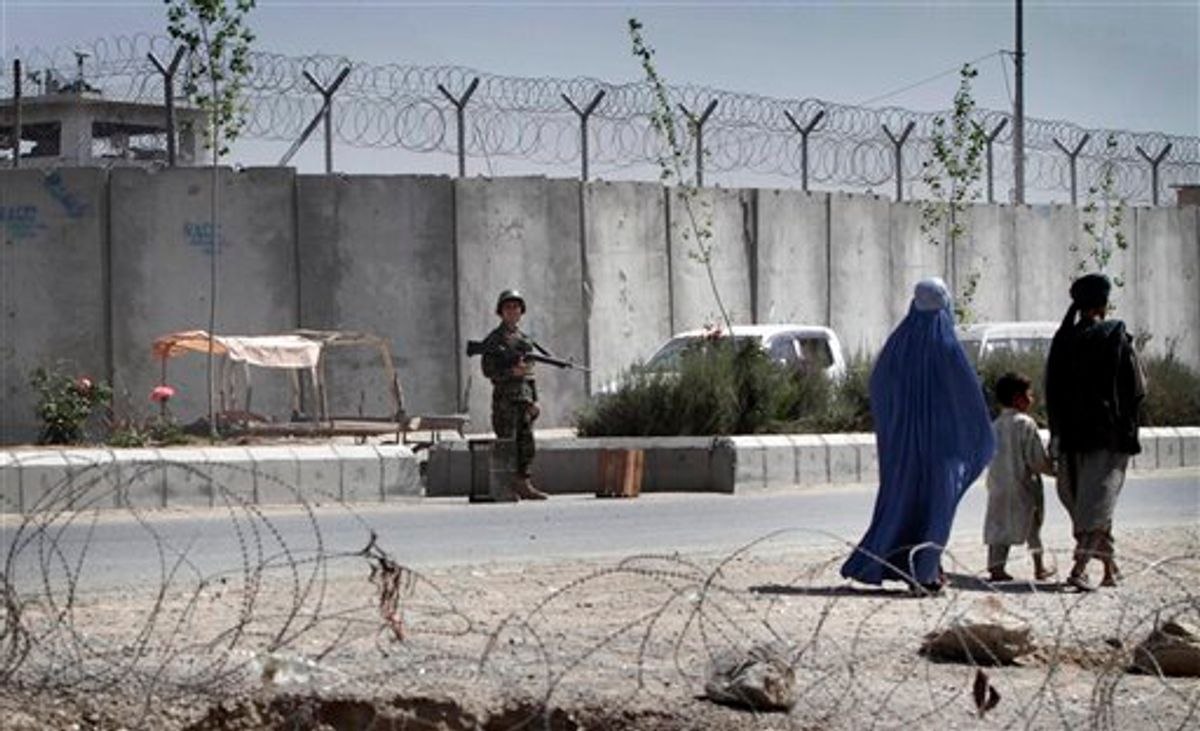 An Afghan solider, center, stands guard outside of the main prison in Kandahar, south of Kabul, Afghanistan Monday, April 25, 2011. Taliban insurgents dug a more than 1,050-foot (320-meter) tunnel underground and into the main jail in Kandahar city and whisked out more than 450 prisoners, most of whom were Taliban fighters, officials and the insurgents said Monday. (AP Photo/Allauddin Khan) (AP)
--

Taliban militants tunneled more than 480 inmates out the main prison in southern Afghanistan overnight, whisking them through a 1,000-foot-long underground passage they had dug over months, officials and insurgents said Monday.

Officials at Saraposa prison in the city of Kandahar only discovered the breach about 4 a.m., about a half hour after the Taliban said they had gotten all the prisoners out.

The militants began digging the tunnel about five months ago from a house within shooting distance of the prison guard towers. It was not immediately clear whether they lived in the house while they dug. They meticulously plotted the tunnel's course around police checkpoints and major roads, the insurgent group said in a brazen statement.

The diggers finally broke through to the prison cells around 11 p.m. Sunday night, and a handful of inmates who knew of the plan unlocked cells and ushered hundreds of inmates to freedom without a shot being fired.

A man who claimed he helped organize those inside the prison told The Associated Press in a phone call that he and his accomplices obtained copies of the keys for the cells ahead of time from "friends." He did not say who those friends were, but his comments suggested possible collusion by prison guards.

"There were four or five of us who knew that our friends were digging a tunnel from the outside," said Mohammad Abdullah, who said he had been in Sarposa prison for two years after being captured in nearby Zhari district with a stockpile of weapons. "Some of our friends helped us by providing copies of the keys. When the time came at night, we managed to open the doors for friends who were in other rooms."

He said they woke the inmates up four or five at a time to sneak them out quietly. The AP reached Abdullah on a phone number supplied by a Taliban spokesman. His account could not be immediately verified.

The Taliban statement said it took four and a half hours for all the prisoners to clear the tunnel, with the final inmates emerging into the house about 3:30 a.m. They then used a number of vehicles to shuttle the escaped convicts to secure locations.

Government officials corroborated parts of the Taliban account. They confirmed the tunnel was dug from the nearby house and the prisoners had somehow gotten out of their locked cells and disappeared into the warm Kandahar night.

The city's police mounted a massive search operation for the escaped convicts. They shot dead two inmates who tried to evade capture and re-arrested another 26, said Tooryalai Wesa, the provincial governor.

But there was no ignoring that the Taliban had pulled off a daring success under the noses of Afghan and NATO officials.

"This is a blow," presidential spokesman Waheed Omar said. "A prison break of this magnitude of course points to a vulnerability."