We won't have Haley Barbour to kick around anymore

The Mississippian with a tin ear for race decides not to run for president. Is Mike Huckabee the big winner? 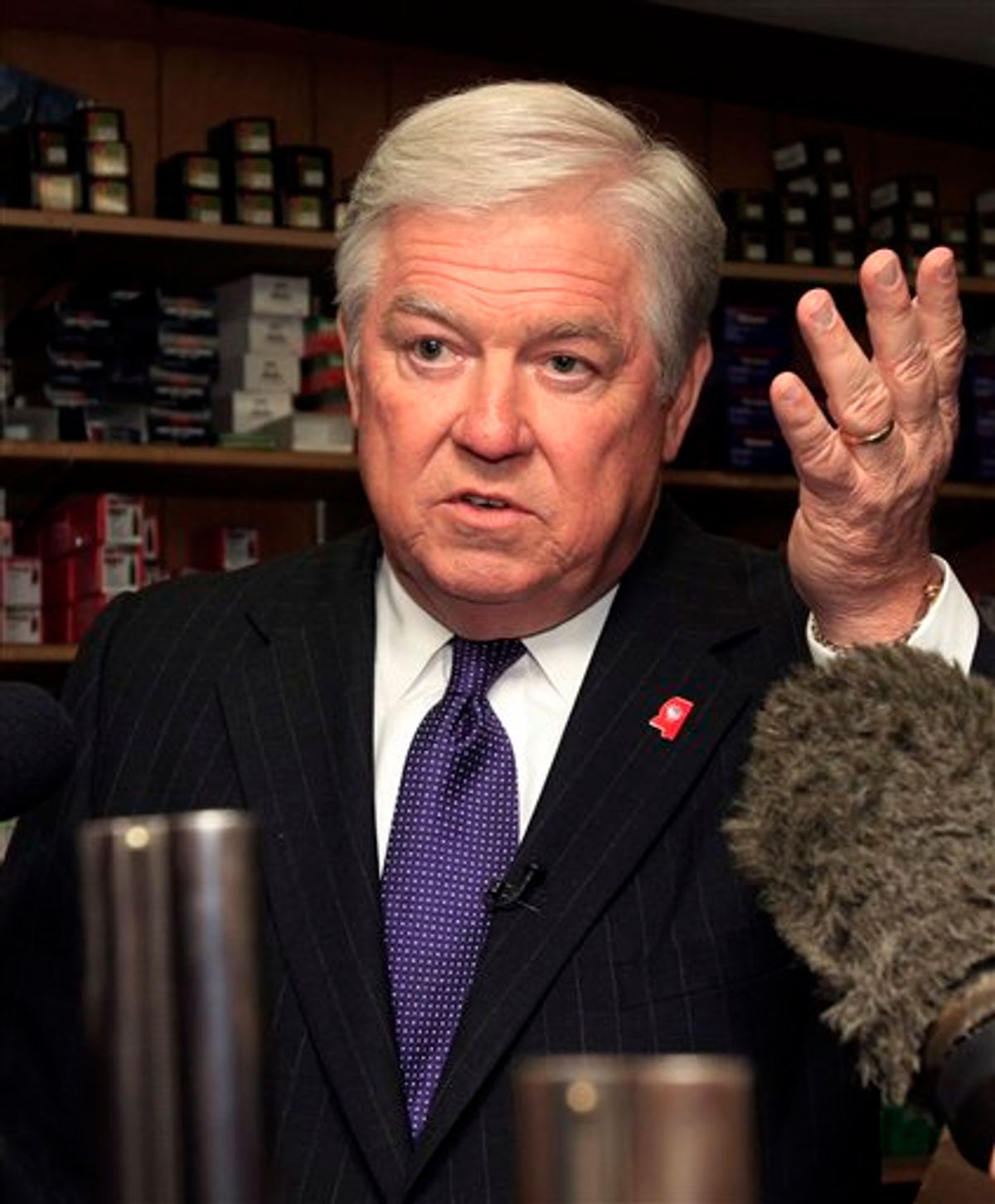 This was going to be the week that Haley Barbour made official what we've all been assuming for a while: That he's a candidate for the 2012 Republican presidential nomination.

Instead, he's dropping out.

The Mississippi governor, who was in New Hampshire just over a week ago and who was slated to return to the first-in-the-nation primary state in early May, released a statement Monday afternoon claiming that he's not sure he has the "absolute fire in the belly" required to wage a '12 campaign.

On one level, it's easy to see why Barbour is backing out now. The burden of his tone deaf (and worse) comments on race and his home state's fraught racial history posed two serious problems for him: (1) In a general election campaign against America's first black president, they might distract from or overshadow his and his party's preferred message; (2) The prospect of (1) threatened to cost him primary season support from the conservative establishment -- which might not have a problem with his comments per se, but which is not overly eager to commit political suicide in the '12 election.

So Barbour, a man with no shortage of longstanding, intimate ties to members of the conservative establishment, has spared himself the potential indignity of being told, day after day throughout 2011 and early 2012, "Sorry, Haley" by one old friend after another.

Still, it's surprising that he didn't take a shot. There continues to be an unusual amount of room to maneuver on the Republican side. There is no runaway favorite gobbling up cash and endorsements and leaving the rest of the field in the dust in horserace polls. Mitt Romney may be the closest there is to a natural front-runner, and his struggle to win acceptance from key GOP coalition components is well-documented. Donald Trump's recent rise in GOP polls -- which will almost certainly reverse itself if he persists with his candidacy charade -- is a testament to how eager GOP voters are for someone, anyone to rescue them from the uninspiring candidate choices they now face.

Against Mitt and T-Paw and Rick Santorum and Buddy Roemer, maybe Barbour could have found some traction (as improbable as it seems), fared surprisingly well in Iowa, made it through New Hampshire, then made a big move in South Carolina and the rest of Dixie. This is the kind of Republican field in which every candidate (well, OK, not every candidate) can look at his rivals and ask, "Why not me?"

Within minutes of Barbour's announcement, some conventional wisdom had already emerged: The biggest beneficiary of this news would be ... Mitch Daniels, the Indiana governor and Barbour buddy who's been mulling a run (with David Brooks and other think tank-types pleading with him to get in).

This might be a bit shortsighted, though. Sure, to the extent Daniels was undecided because of his personal friendship with Barbour, this news should make it easier for him to run and (perhaps) to corral some establishment support that otherwise would have gone to Barbour. But another potential candidate stands to benefit far more: Mike Huckabee, who has seemed far more interested in running lately than he did just a few months ago.

Huckabee, obviously, has strong built-in support from evangelical voters -- enough to make him the instant Iowa front-runner if he gets in. Now, remember one of the reasons why Huckabee's campaign fizzled after his Iowa victory in 2008: Too many white born-again Christian voters in the South stayed away from him, instead opting for Romney or John McCain (who by the time Super Tuesday rolled around had become the clear GOP frontrunner). The good news for Huckabee is that, since the '08 campaign, his appeal to all Republican voters has grown significantly; his popularity is higher today within the GOP than any other '12 prospect. In other words, Huckabee has put himself in position -- at least potentially -- to expand his '08 coalition and to win key Southern states that eluded him in 2008.

In this sense, a Barbour candidacy, with its strong regional appeal, could have been problematic for Huckabee. If he does run and win Iowa, Huckabee would probably then lose New Hampshire handily; Southern, religious-flavored conservatism has never sold well in the Granite State. Thus, he'd then need to bounce back -- strongly -- in the South. The last thing he'd need is Barbour eating up votes that might otherwise go to the region's other candidate in the race.

The South's importance to the GOP is only growing, and so is its sway in the party's nominating process. And Huckabee may be the region's best bet in '12; unlike Barbour, he's learned to talk about race in a way that doesn't alienate general election voters from outside the region. If he does run, his prospects of doing so as the South's candidate just improved.