By Elizabeth A. Kennedy - Diaa Hadid 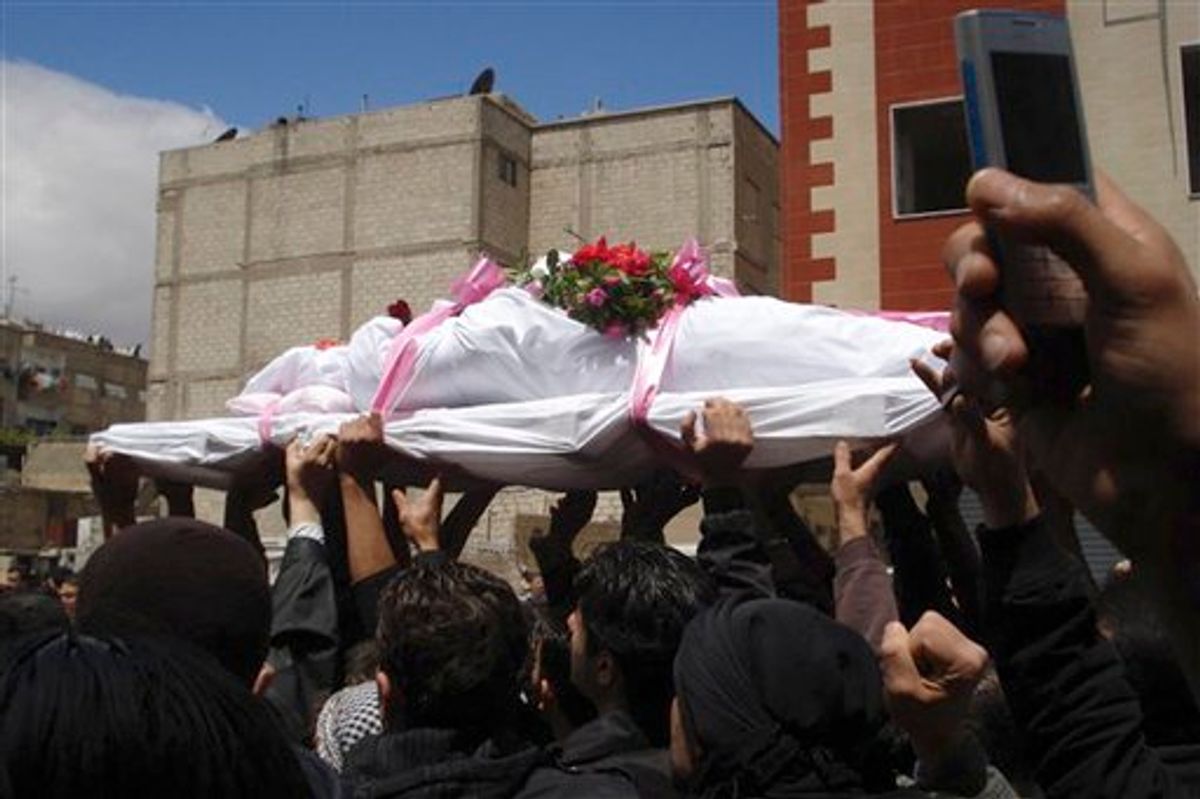 In this citizen journalism image made on a mobile phone and acquired Saturday April 23, 2011, by The Associated Press, Syrian anti-government protesters carry the coffin of an activist who was killed on Friday during his funeral procession in Quaboun near Damascus, Syria, Saturday, April 23, 2011. Syrian security forces fired on tens of thousands of mourners during funeral processions Saturday, killing several people following the deadliest day of the uprising against authoritarian President Bashar Assad. (AP Photo) (AP)
--

The offensive into Daraa was the most intense in a series of actions to put down dissent and appeared part of new strategy for pre-emptive strikes against the opposition to President Bashar Assad's regime rather than reacting to marches and protests.

More than 300 people have been killed across the country since the uprising began. But the relentless crackdowns have only served to embolden protesters, who started with calls for modest reforms but are now increasingly demanding Assad's downfall.

"We need international intervention. We need countries to help us," shouted a witness in Daraa, who said he saw five corpses after security forces opened fire on a car. He spoke to The Associated Press by telephone.

Another witness said people were using mosque loudspeakers in Daraa to summon doctors to help the wounded as busloads of security forces and troops conducted house-to-house searches, causing panic in the streets.

"They are entering houses, they are searching the houses," he said. "They are carrying knives and guns."

All witnesses spoke on condition of anonymity for fear of reprisals. Syria has banned nearly all foreign media and restricted access to trouble spots since the uprising began, making it nearly impossible to get independent assessments.

The sweep into Daraa, a city of about 300,000 people near the Jordanian border, sought to hit the opposition movement at one of its pillars. The protests against Assad began there in March and several political figures from the area have stepped down to protest the violence in embarrassing defections from the regime.

In Geneva, the U.N. human rights chief, Navi Pillay, said Syria has turned its back on international calls to "stop killing its own people."

"Instead, the government's response has been erratic, with paper reforms followed by violent crackdowns on protesters ... The killings must stop immediately," Pillay said.

Still, the regime was clearly stepping up its efforts to crush the uprising, which has posed the gravest challenge to the 40-year ruling dynasty by Assad and his father, Hafez, before him. Although the army has been used before to quell demonstrations in recent weeks, its presence Monday was widespread and its tactics were heavy-handed.

But it was not entirely unexpected. There had been signs that the regime was planning to launch a massive push against the opposition.

Last week, Assad fulfilled a key demand of the protest movement by abolishing nearly 50-year-old emergency laws that had given the regime a free hand to arrest people without cause. But he coupled the concession with a stern warning that protesters would no longer have an excuse to hold mass protests, and any further unrest would be considered "sabotage."

When protesters defied his order and held demonstrations Friday -- the main day for protests around the Arab world -- they were met with a gunfire, tear gas and stun guns. Authorities then conducted sweeping arrests of activists and protesters.

Activists on social media posted footage of what they said were troops firing throughout Daraa on Monday.

The crackle of heavy gunfire punctuates the footage, as well as the labored, frightened breathing of the activist filming the footage. The activist repeats the date and location and says: "The army forces are entering Daraa. They are shelling the city of Daraa."

The video could not be independently verified.

On Monday, a Jordanian security official says Syria has sealed the border with Jordan. But the head of Syria's Customs Department said crossings across the frontier were open as normal.

Also Monday, witnesses said Syrian security forces had opened fire in the coastal town of Jableh, where police and army units fired from rooftops over the weekend even though there were no apparent threats and no protests in progress.

On Monday, witnesses said security forces in camouflage uniforms -- some with their faces covered -- and masked gunmen dressed in black were roaming the town's streets.

"Jableh is surrounded by security forces," the witness said, speaking by telephone. "The dead are in the mosques and the houses. We can't get them out."

Violence also was reported in Douma, a suburb of the capital, Damascus, where authorities were making sweeping arrests.

"The security has been heavy here since Friday, but overnight they cut off parts of the city from each other," a witness said. "They set up checkpoints to separate the quarters."

Assad has blamed most of the unrest on a "foreign conspiracy" and armed thugs trying to sow sectarian strife.

But possible cracks could be emerging from within the regime.

Two members stepped down from the provincial council in the southern region of Daraa, which has the highest death toll in the country. The resignations came a day after two lawmakers and a religious leader from Daraa also turned their backs on Assad in disgust over the killings.