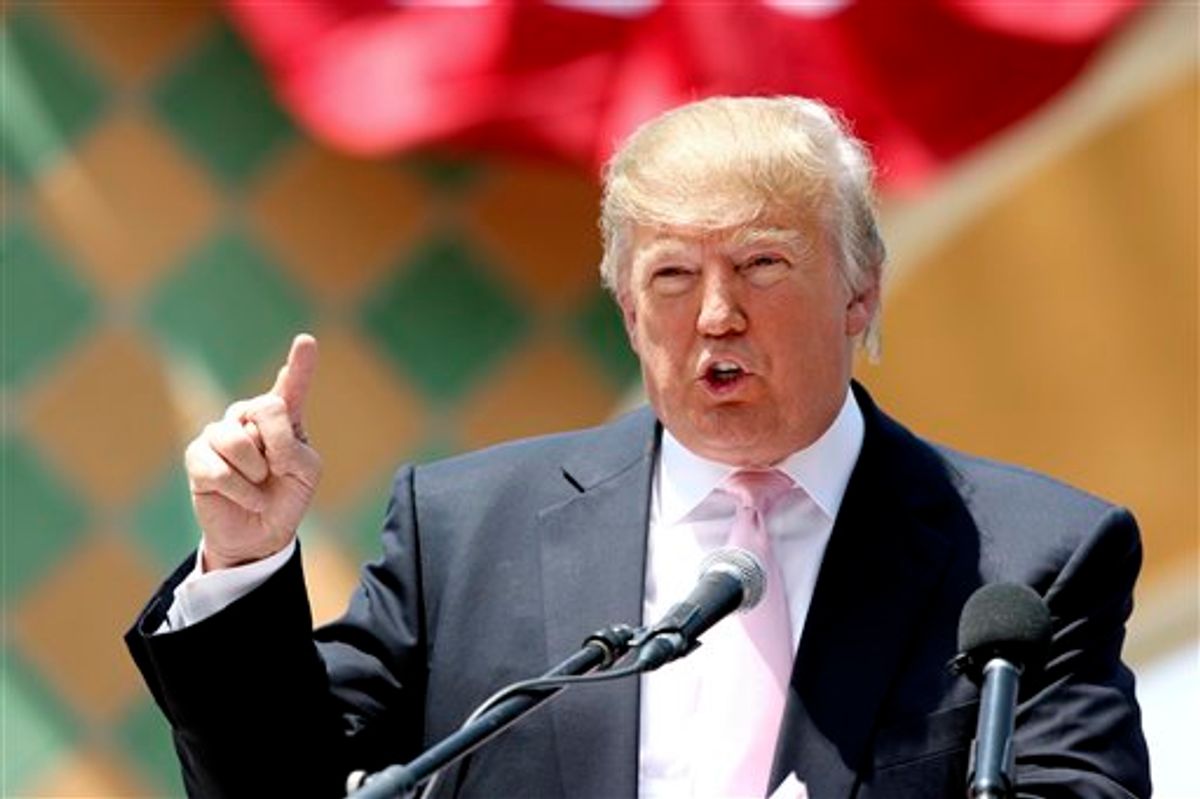 When his history of sizable political donations to New York Democrats  -- including Chuck Schumer and Charles Rangel -- was publicized last week, Donald Trump urged his fellow Republicans not to view it as an act of betrayal.

"I've lived in New York. This building, this great tower, and many other great towers are here in New York. Everyone's Democratic. So what am I going to do -- contribute to Republicans? One thing: I'm not stupid. Am I going to contribute to Republicans for my whole life when they get heat when they run against some Democrat and the most they can get is 1% of the vote?"

Presumably, he'll use some variation of this line to explain Monday morning's news that he also gave $50,000 to Rahm Emanuel for his recent Chicago mayoral bid. Of course, as others have noted, none of this explains the significant donations Trump has made to numerous Democratic Senate candidates from outside New York -- candidates, in many instances, who faced close races against their Republican opponents.

Nor does it explain another chapter in Trump's history of Democratic donations, one Salon discovered in a quick review of Pennsylvania campaign finance records: The $32,000 he gave to Ed Rendell.

When Rendell entered Pennsylvania's 2002 gubernatorial race, Trump committed himself to the former Democratic National Committee chairman's cause. Between December 2001 and Election Day '02, Trump personally gave $27,000 to Ed Rendell's gubernatorial campaign. He also chipped in $5,000 more at the end of 2003, when Rendell was finishing up his first year in office.

Mind you, Rendell's victory in 2002 was by no means a foregone conclusion. He faced a serious threat in the May Democratic primary from Robert Casey, then the state's treasurer and the son of a former governor. The sharpest ideological difference between the two men may have been on abortion: Rendell was pro-choice, while Casey was pro-life (like his father, who was denied a speaking slot at the 1992 Democratic convention in part because of it). During the primary campaign, Trump provided Rendell with $6,000. Rendell ended up beating Casey by 13 points.

In the general election, Rendell faced Republican Mike Fisher, the state's attorney general. Fisher had won the GOP nomination in spite of the strong popularity of Mark Schweiker, who had become acting governor in the fall of 2001, when Tom Ridge left to lead the newly created federal Homeland Security department. With Republican leaders making it clear that they still wanted Fisher as their candidate, Schweiker declined to run. Still, Fisher was a solid candidate and the race was entirely winnable for the GOP -- especially since the post 9/11 climate of 2002 ended up favoring Republicans across the country. But Trump snubbed Fisher and instead poured another $21,000 into Rendell's coffers. Trump's money wasn't decisive, but it hardly helped Fisher, who went on to lose by eight points.

It seems obvious what was behind Trump's donations; Casino business. Rendell ran on a platform of legalizing slot machines in the state. For Trump, this was both a threat (since slots in Pennsylvania could take away business from his Atlantic City casinos) and an opportunity (to expand his own gaming empire). A governor, Rendell ended up pushing through a plan that not only legalized slots at horse racing tracks but also allowed the creation of several new gaming resorts in the state. But when the Pennsylvania Gaming Control Board awarded contracts for the new resorts in 2006, Trump was shut out. (His four-year effort to fight the decision in court finally ended a few months ago.)

Losing out on the Pennsylvania application could prove costly to Trump's company in the years ahead. The state has since legalized table games, allowing the new slot resorts to expand their gaming offerings and to compete more directly with Atlantic City. Now, Pennsylvania is on track to move past Atlantic City as America's No. 2 casino market.

No wonder Trump was so angry with Rendell when his application was rejected in 2006. "Pennsylvania is a little too political of a state for me," he fumed at the time. "It sounds like you have to be a friend of the governor to get a casino."