US weighs sanctions against Syrian leaders 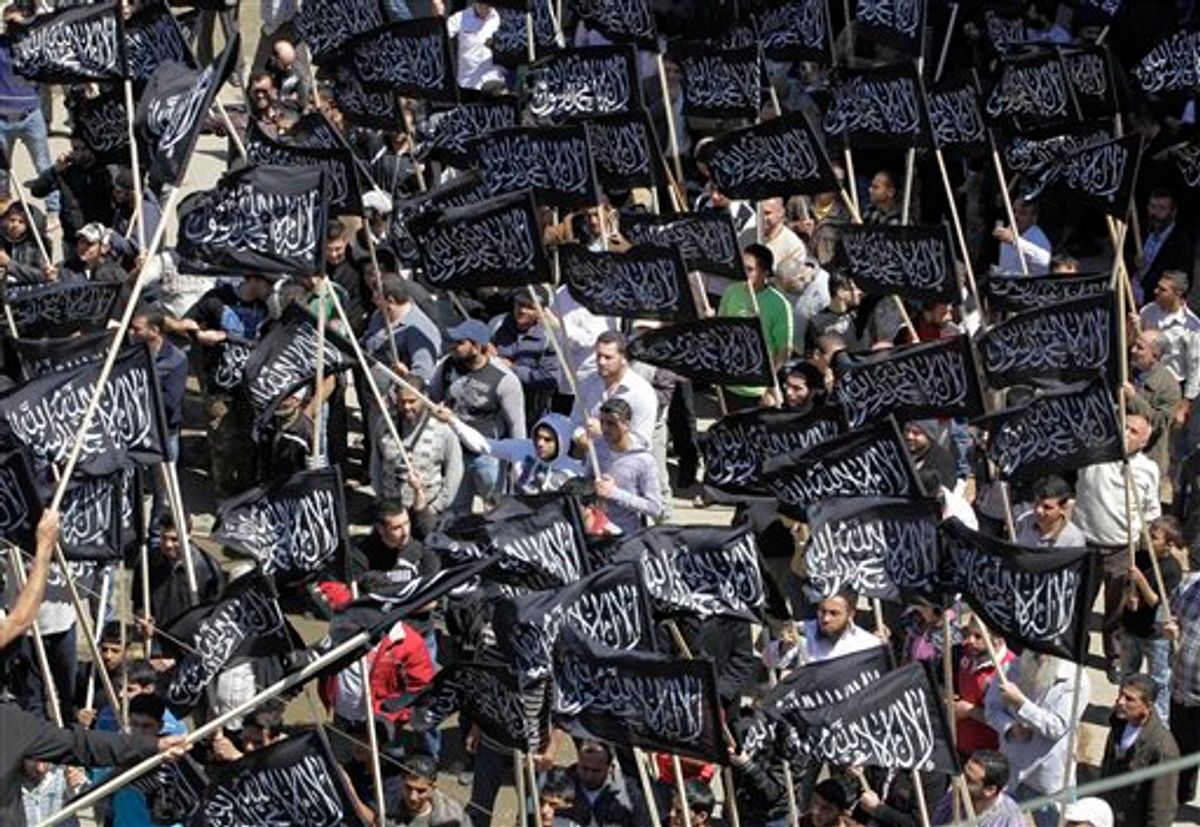 Supporters of an Islamic group wave their party flags as they protest against the Syrian regime, in the northern city of Tripoli, Lebanon, on Friday April 22, 2011. The demonstration in support of the "Syrian people" was called for by the Tahrir Party. It was not granted a license from the interior ministry. Syrian security forces have launched a deadly crackdown on demonstrations that started last month, killing more than 200 people. (AP Photo/Hussein Malla) (AP)
--

The Obama administration has begun drawing up targeted sanctions against Syrian President Bashar Assad and his inner circle, officials said Monday, as the White House escalated U.S. condemnation of the increasingly violent crackdown against anti-government protesters in which more than 300 people have been killed.

An official familiar with the process said inter-agency discussions about the severity and scope of possible sanctions are under way but that they would likely involve asset freezes and travel bans on Assad, members of his family and senior regime officials. Syria already is subject to numerous penalties as it is deemed a "state sponsor of terrorism" by the State Department. But the new sanctions now being considered would target specific individuals accused of ordering or committing human rights abuses, the official said.

Similar sanctions were crafted for Libyan leader Moammar Gadhafi, his family and top aides. But the model for the Syria sanctions would likely be the penalties the administration put in place against senior Iranian officials for human rights abuses in the aftermath of disputed elections, the official said. The official spoke on condition of anonymity to discuss internal administration deliberations.

The official said that sanctions will be announced sometime soon, but the official was not specific about the timing. However, the official acknowledged an urgency to act and noted that calls for sanctions to be imposed quickly have been growing as Assad's crackdown on protesters has intensified.

On Monday, Assad's regime sharply escalated its crackdown on pro-reform demonstrators with troops backed by tanks and snipers storming the southern city of Daraa in the pre-dawn hours, according to witnesses. One witness said at least 11 people were killed as security forces fired indiscriminately on civilians. Another 14 people were lying in the streets, apparently dead or gravely injured, the witness said.

At the White House, Press Secretary Jay Carney deplored the latest developments and said that sanctions against the Assad regime were a possible response "to make clear to the Syrian government that we believe it needs to cease and desist from the violence it's been perpetrating against its own citizens."

Carney said the U.S. was conferring with its allies and with the United Nations about options for Syria.

But he declined to say whether Assad had lost the support of his people. "It is up to the people of Syria to decide who its leader should be. That's what we believe," Carney said.

Carney also argued that there were numerous differences between the situation in Syria and the one in Libya, where the U.S. called for Gadhafi's exit and, with United Nations backing, launched airstrikes and sorties aimed at protecting civilians and enforcing a no-fly zone.

"Libya was a unique situation," said Carney. He said Gadhafi had lost control of much of the country and was readying a merciless military assault against his own people.

Since President Barack Obama took office in 2009, his administration had tried to engage Assad's government and encourage reforms. Carney contended that even though Syria's government has ignored U.S. calls to stop the recent bloodshed, placing a U.S. ambassador in Damascus has proven useful "precisely because we can speak very clearly in this case regarding our opposition and concern" about the government's actions.