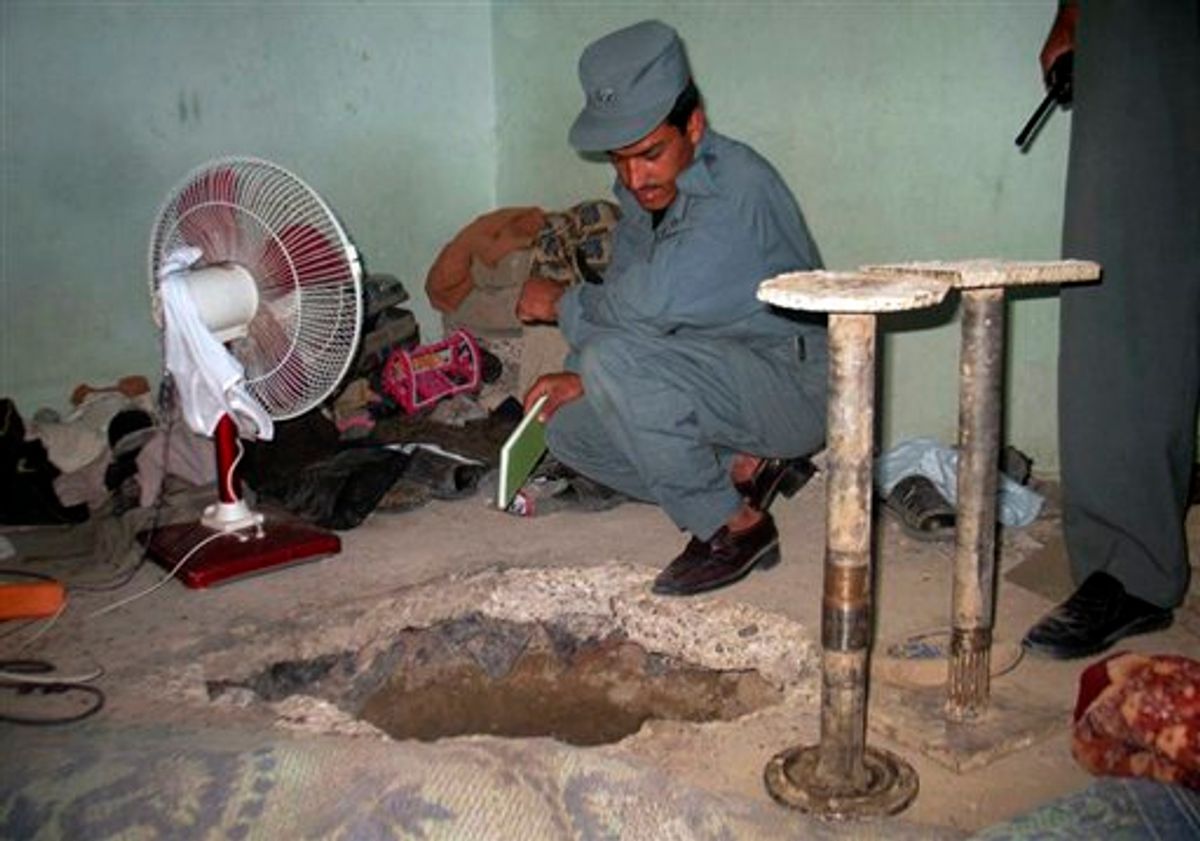 An Afghan policemen takes a look at the opening of tunnel at the main prison in Kandahar, Afghanistan which prisoners escaped through on Monday, April 25, 2011. Taliban insurgents dug a more than 1,050-foot (320-meter) tunnel underground and into the main jail in Kandahar city and whisked out more than 450 prisoners, most of whom were Taliban fighters, officials and the insurgents said Monday. (AP Photo/Allauddin Khan) (AP)
--

Afghan forces have recaptured at least 65 of the prisoners who escaped from the south's largest prison, the government said Tuesday as it scrambled to recover from the massive security breach that allowed 480 inmates to be spirited out in a stunning jailbreak.

Prison officials discovered early Monday morning that the convicts -- nearly all of them Taliban militants -- were missing from their cells, and then found the tunnel through which they appeared to have made their getaway.

The Taliban said the prison break was five months in the making, with diggers starting the tunnel from under a nearby house while they arranged for inmates to get cell keys so that they could open their cells on the night of the escape.

The Kandahar provincial governor's office said that Afghan and international forces are working together to find the missing convicts and re-arrest them. It said the troops have already caught 65 and killed two who tried to resist. Authorities have biometric data on each prisoner, which aids in their identification, the statement said.

But even if a sizable number of the convicts are recaptured, the already weak provincial government will likely continue to struggle to recover from the blow to its image.

Adding to the feelings of insecurity, the prison break came less than two weeks after the Kandahar police chief was killed by a suicide bomber inside his heavily defended office compound.

"How can we trust or rely on a government that can't protect the police chief inside the police headquarters and can't keep prisoners in the prison?" asked Islamullah Agha Bashir, who sells washing machines and other appliances in Kandahar city. "Last night while we were eating dinner I told my two sons not to go out as much because I am afraid that now when the morale of the Taliban is high, they will attack more."

In Kabul, officials started to piece through the details of the escape and place blame. Justice Minister Abibullah Ghalab sent a formal letter to President Hamid Karzai acknowledging that prison officials or guards likely acted as accomplices but also saying that Afghan and international security forces should have detected the plot.

"The escape of all the prisoners from one tunnel ... shows that collaborators inside the prison somehow provided an opportunity," Ghalab said in the letter.

However, he also noted that Afghan police searched the compound from which the tunnel originated about two and a half months before the prison break and he said that Canadian and American forces have been responsible for security improvements to the prison. A full investigation was under way.

Kandahar city has been a major focus of the international troop surge over the past year, with NATO officials saying that establishing security there will be key to securing the region. Last summer, Afghan forces created a ring of checkpoints around the city and started pushing out into Taliban bed-down areas on its outskirts in a plan to establish the government's authority before the rise in attacks that usually comes with warmer weather in the spring and summer.

The Taliban have responding by starting off the spring fighting season with a string of attacks apparently designed to undermine trust in the capabilities of the Afghan government. Within the past two weeks, Taliban agents have also launched deadly attacks from inside the Defense Ministry a shared Afghan-U.S. military base in eastern Laghman province.

The attacks have exposed weaknesses that have also thrown doubt on the readiness of the Afghan government to start taking over authority for security parts of the country as planned. Without that transition, it becomes more difficult for the country's international allies to show an exit strategy that will start bringing their troops home.

NATO does continue to have tactical successes. The international coalition announced Tuesday that it had killed a key al-Qaida operative in Afghanistan in an airstrike.

NATO identified the man killed in the April 13 airstrike in Dangam district of eastern Kunar province as Abu Hafs al-Najdi, also known as Abdul Ghani. The alliance said he was a regional commander in charge of suicide bombings and cash flow. The strike also killed a number of other insurgents, including another al-Qaida leader known as Waqas.

But Afghans tend to focus on the continuing danger they face in their daily lives -- either as government workers who may be targeted or just that they could be a bystander when a suicide bomb goes off.

In eastern Paktia province on Tuesday, the provincial governor narrowly escaped an apparent assassination attempt by insurgents. A roadside bomb exploded just behind a vehicle taking Gov. Juma Khan Hamdard to his office, said Rohallah Samon, a spokesman for the governor.

Hamdard was not hurt, but three policemen who were in a chase vehicle were slightly injured, Samon said.