He's old and he has no chance of winning, but the libertarian Texan will add badly needed variety to the GOP race 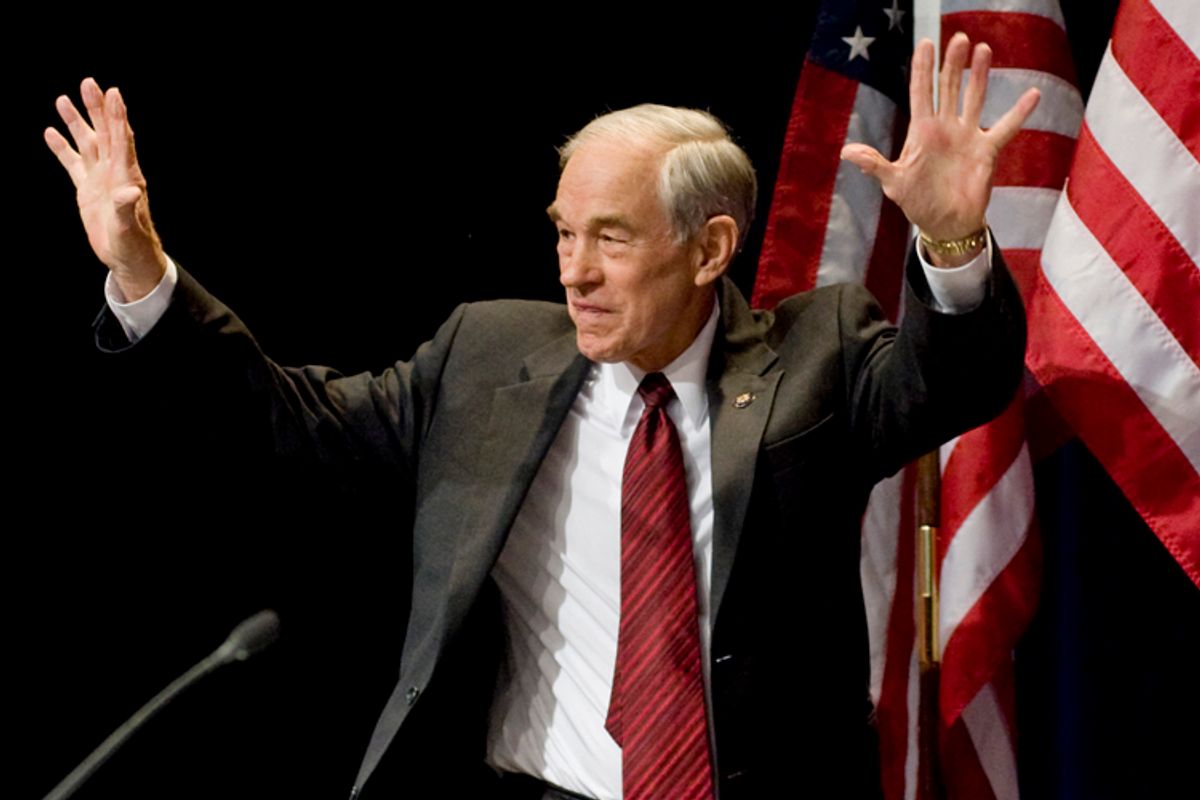 Ron Paul has called a press conference for later today at which he apparently will announce the formation of a presidential exploratory committee.

It's not surprising that someone named Paul will seek the GOP nomination, although there was some suspense over whether it would be Ron or his son Rand, the first term senator from Kentucky. Conditions within the Republican Party have never been more favorable to the Paul family's libertarian brand of conservatism. In the post-Bush era, the party's base has grown unusually restive and eager to embrace staunchly anti-tax/anti-government ideologues. Ron Paul fared surprisingly well when he ran in 2008, raising staggering sums of money and netting nine percent in Iowa and eight percent in New Hampshire -- a performance that no one thought possible when the Texas congressman initially entered the race. Given the mood of the base and the underwhelming nature of the GOP field, it's possible that he'll fare even better this time around.

That said, there's a clear ceiling on Paul's support. A passionate, not insignificant chunk of the Republican base is receptive to him and his message. But most of the conservative establishment is openly hostile to him, partly because of his adamantly non-interventionist foreign policy views and partly because he can be so easily painted as a fringe figure. Elite conservative opinion-shapers long ago succeeded in marginalizing Paul within the GOP. This point was driven home at CPAC the past two years. Each time, Paul won the annual presidential straw poll (with well under 50 percent of the vote), setting off jubilant cheers from his supporters -- and angry boos from just about everyone else in the room. Recall also that Fox News actually blocked Paul from participating in the final GOP debate before the 2008 GOP primary -- even though he had just finished ahead of Rudy Giuliani (and tied with Fred Thompson) in Iowa.

In this sense, Rand Paul might have been the family's better bet as a '12 candidate. He's younger, more savvy at communicating on television, and has shown enough ideological flexibility to make inroads with the GOP establishment that are impossible for his father. Of course, Rand Paul would have faced a ceiling too in the GOP primaries; it just might have been higher than his father's. So at 75 (soon to be 76) years old, Ron Paul will make his third presidential bid. He'll probably be the oldest candidate to be regularly included in televised primary debates (unless you count Mike Gravel, who was 77 when he crashed a few Democratic debates in early 2007, or Eugene McCarthy, who was nearly 76 when he made it into one Democratic debate in 1992).

The biggest loser of Ron Paul's decision is clearly Gary Johnson, the former New Mexico governor and fellow libertarian. Johnson announced last week that he's running. It's hard to see how there's much room for him in the race now. The biggest winner may be political junkies, who will probably find the coming GOP presidential debates far more interesting with Paul in them, especially when the subject turns to foreign policy. Paul's appearance on Sean Hannity's show last night offered a preview of what we can expect. When the subject turned to America's relationship with the Muslim world, Paul refused to engage in the kind of Muslim-baiting that has become de rigueur for Republican politicians. Here's the video: