Arkansas tornado all but wipes out town 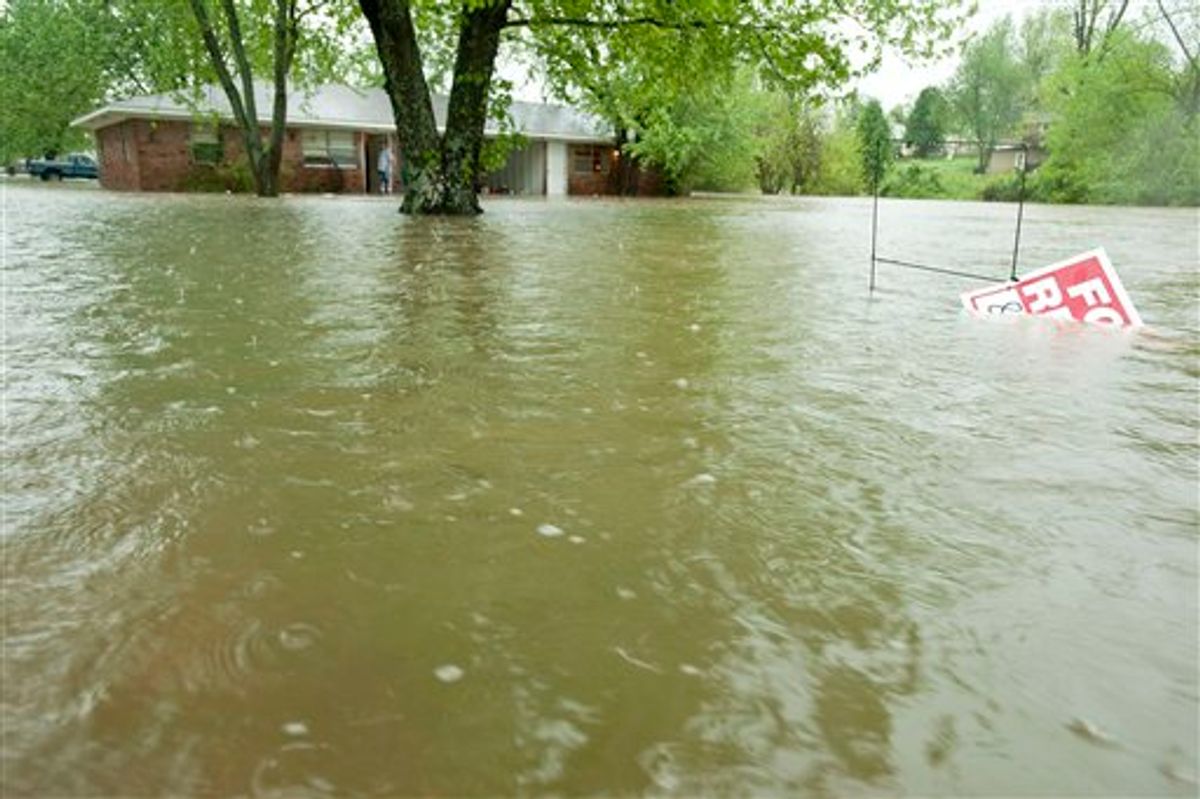 Water from a nearby creek begins to rise around a home on 54th Street on Monday, April 25, 2011, in Fayetteville, Ark. Much of Northwest Arkansas was hit with heavy rain and flash floods. (AP Photo/Beth Hall) (AP)
--

A twister that hit the small, rural town of Vilonia late Monday tore roofs from homes and stores, and tossed vehicles into the air. Four residents of the close-knit community were killed by the tornado.

Arkansas Gov. Mike Beebe says rescuers have accounted for everyone who lives in the tornado-struck town and that the death toll in the rural community will likely remain at four.

Rescue crews continue, however, to search for survivors -- or bodies -- in nearby Garland County where the storm also hit hard late Monday.

Beebe toured Vilonia on Tuesday morning. He says he is impressed with the scale of the twister, which left a broad trail of destruction through the town of 3,800, some 25 miles north of Little Rock.

The main road through town of 3,800 was passable, but debris still littered the street. Officials set up a command post at a grocery store, whose roof was torn off and deposited in the parking lot by the storm.

Faulkner County sheriff's Capt. Matt Price said he wasn't sure how many people were missing. Late Monday, fire chief Keith Hillman said some 50 to 60 people were still not accounted for. Hundreds of emergency workers from several counties were checking homes.

The deaths from Monday's storms bring this month's storm-related death toll in Arkansas to 14. And forecasters said another bout of bad weather was expected to hammer the state Tuesday afternoon, further complicating rescue efforts.

Faulkner County spokesman Stephan Hawks said the infrastructure in and around Vilonia was badly damaged.

"One of the hardest hit things is the utilities. It tore down power lines for, gosh, I'd guess a mile or so. It snapped overhead poles like they were toothpicks. It's pretty devastating," Hawks said. "It was a heck of a little tornado."

The National Weather Service office in North Little Rock sent survey teams Tuesday morning to Vilonia, some 25 miles north of Little Rock, and to nearby Garland County. The teams will investigate the damage and assess how much of it was caused by tornadic or straight-line winds.

John Robinson, a weather service warning coordination meteorologist, said it could take days to survey all the damage tracks from Monday's storms.

"It wouldn't surprise me if we were to end up with a count of 10 or 12 tornadoes by the time all the surveys are completed," Robinson said.

The storm also caused damage at Little Rock Air Force Base in Jacksonville, Ark., and in Polk County. Authorities canceled classes at the storm-battered North Pulaski High School near Jacksonville. Schools in other parts of the state told students to stay home because of flooding and storm damage.

Rescuers in Garland County battled to reach areas that were cut off late Monday by the flooding.

"It's difficult this early on to find out what really has happened," said Sanders, who noted that rescuers have thus far relied on reports from residents who speculated about which of their neighbors may have been home when the storm swiped the region.

"It looks like we got run over three or four times," Sanders said.

Flooding also led to the death of at least three people in the northwest corner of the state, where raging waters swept vehicles from the roads, according to officials in Washington and Madison counties.

Several rivers in northeast Arkansas topped flood stage, with waters spreading over mainly agricultural land. City Hall in Hardy was evacuated in anticipation of the floodwaters, as were homes along the Spring River, even though most were built on 10-foot pilings.

Roads in and out of the area were impassable due to flood waters.