When nature calls -- at the worst time

At 26, I never thought the accident everyone fears would happen to me. But it did, and it was horrifying 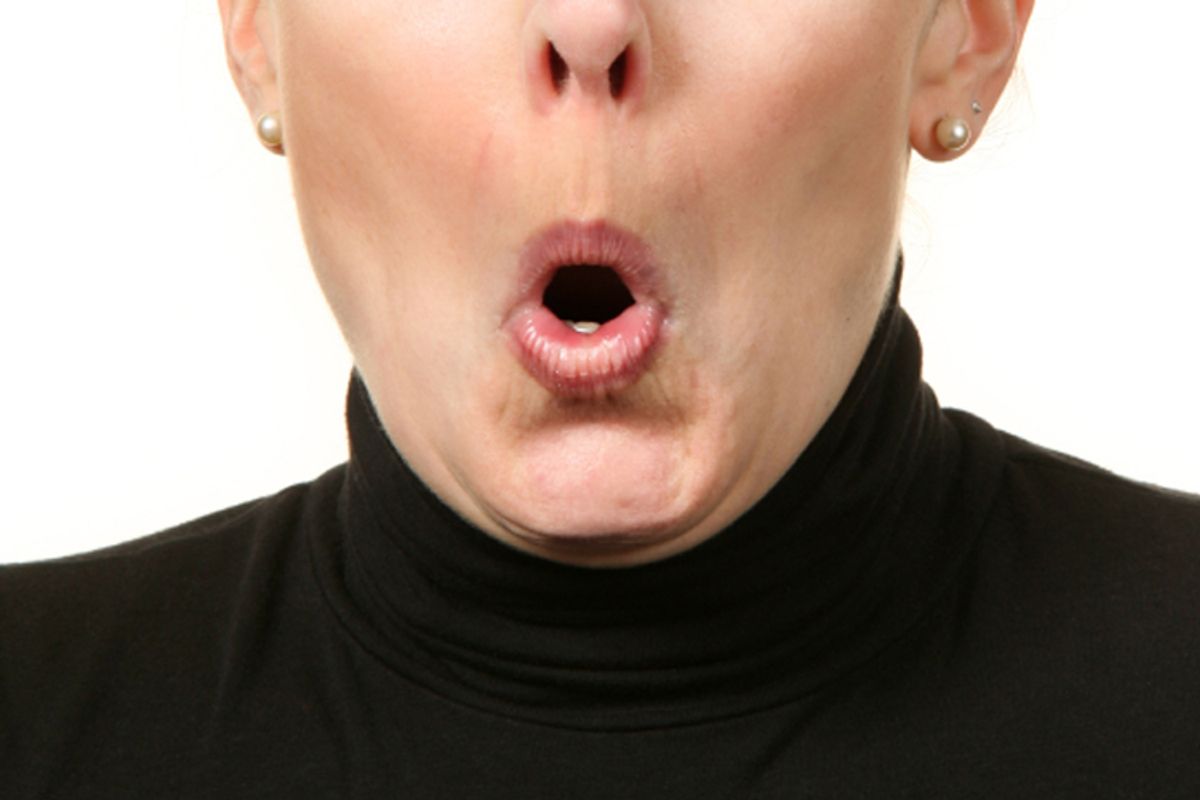 You never quite forget the first time you crap yourself. Sure, there are the preambles -- the day you barely made it, running down the hall looking like a middle school boy hiding his erection, the many pairs of lightly soiled underwear thrown out in random bathrooms, and the spares you now carry in your purse. But nothing can really prepare you for the real deal. Once you cross that line, there’s no turning back.

I was about a month into my stressful new job selling radio ads when it happened. I spent my days making demoralizing cold calls that ended in rejection, and my nights trying to forget. The best way I knew to forget involved gorging on delicious food. Specifically Indian food. And donuts.

High on sugar and fat, my friend Jordan, my husband, John, and I set out for a postprandial walk from the donut emporium. We made it several blocks when it became clear something had gone horribly awry in my intestinal track.

"Get the car!" I squeaked to my companions, feeling the pressure mount in my guts and heat course through my body. "Get the car NOW!"

One look at my sweating, bug-eyed face was all the encouragement they needed.

As they fled, I could feel my muscles give way and round one erupt in my pants. (Funny enough, my pants were brown.) Panicked, I scanned my environment and strategized my next plan of attack. I had about five minutes until they returned with the car, and with no cover in sight, I lumbered over to a parking strip, dropped trou, and began to yank on my underwear in an effort to physically rip them off of me. "C'mon, c'mon, c'monnnnnn" I shouted at my soiled briefs, tugging at the material as I struggled to maintain my squat. I rummaged through my purse and found my keys, using the serrated edge to try to cut the elastic.

Increasingly aware of the time flying by and the adolescent boys slowly walking toward me, I gave up on my undies, zipped off my high heeled boots, stumbled into some sharp thorns, then finally shimmied out of my pants and ruined underwear. Looking around wildly for something with which to wipe, I closed my eyes, swore, and settled on my hand. Frantically, I managed to pull up my pants just as the car came around the corner.

As John and Jordan pulled up, I ran to the parking strip and wiped my hands feverishly on the wet grass, completely prostrate as if in prayer. Luckily, I was surprisingly clean, but I smelled like a litter box. Sweating and panting, I hopped in the car and turned to my husband. "I need to go home," I whispered, biting my tongue to stave off a flood of tears.

Later, I washed my hands like an obsessive compulsive scrub nurse. In the shower, I sobbed, clutching myself and rocking in my antique claw-foot tub. I couldn't shake a feeling that I was dirty and contaminated, no matter how hard I scrubbed. Did I have a food allergy? Did I have cancer? Was I dying? I had never heard of adults outside assisted living facilities pooping their pants. I was only 26 years old. Robust, blond and pink cheeked, I could have moonlighted as a model for Soviet propaganda posters. What was wrong with me?

Completely unnerved and desperate, I turned to my nutrition-minded friends for advice. It was suggested I might have celiac disease, or lactose intolerance, so I dutifully ditched all wheat and dairy for six grueling weeks. Despite my new-found ability to make dairy-free mashed potatoes, my diet experiment did little to ease my symptoms. In a maddening dance of déjà vu, the details of that night were repeated, without warning, at the most inopportune times. Sales calls became roulette wheel nightmares, as I cut pitches short to run to the john. I even completely lost control in one meeting at a nursing home, in an act of ironic solidarity.

Even if I hadn’t been soiling myself in the line of duty, I was way out of my league in this job. The stress of trying to make commission while my body fell apart made my decision to quit and pursue a "lucrative" career as a freelance writer that much easier. Working from home provided a bathroom safety net, and working for myself meant a significant drop in pressure.

Unfortunately, the second my resignation letter hit the desk and my health insurance ran out, all hell really broke loose. Every event suddenly centered on its proximity to bathrooms, making my apartment the only safe haven most of the time.

Malnourished and dehydrated, exhaustion set in. My pink skin took on a grayish tinge. My joints began to ache from the systemic inflammation. And the bathtub began filling with hair each day -- a few strands at first, and then large stringy clumps. I couldn’t even rejoice when I lost 10 pounds in one week. It was obvious my body was breaking down.

Even with my online searches, I had no idea what was going on, but going to the doctor seemed out of the question. With only catastrophic health insurance, my access to health care was limited at best. I wasn’t up for spending hundreds or thousands of dollars to be diagnosed with something that would keep me from qualifying for better health insurance. And I was just plain scared. Scared of knowing the truth, scared to hear what I could only assume was "you’re dying" from a qualified doctor. So I waited, and watched, hemmed and hawed, scanned WebMD and tried to piece together evidence for what was ailing me.

But the breaking point came at last. After lunch, in the car, IT happened. We were on the freeway, over 20 minutes from home, and there was nothing to do but sit in the filth, wailing "why meeeeeeee!" to my visibly shaken husband. When we got home, he confronted me. "You need help," he said. "You need to see a doctor. I don’t really care how much it costs." And then he went to the bar.

Two days later, I sat with my new doc as he ordered a colonoscopy, stool samples and an upper gastrointestinal tract X-ray, all in the name of figuring out what was wrong with me. As I entered the room I stifled a gasp. Dark and buzzing with machines, the place looked straight out of "Star Wars," with a giant white vertical table providing a Death Star-like focal point. Led to this table, I was mounted and cuffed, torture victim style, as the table was lowered to various positions until I ended up completely horizontal. An X-ray made its way over my torso, making a stop action movie of my upper GI tract while the radiologist hid behind protective glass.

For step two, I collected my crap in a dish that nestled in the toilet, and then scooped it into little vials of preservative. The vials were then shoved in a paper bag, which my husband ran to the doctor within the hour. We had to do this three different times, and each time I fantasized about a cop pulling John over for some minor infraction. "What’s in the bag, buddy?" he would ask, stone-faced behind his aviators. "Poop, sir. Vials of poop." "Very funny, now get out of the car." Fortunately, or unfortunately, each crap run went off without a hitch.

Step three involved fasting for 12 hours, then drinking Gatorade and a couple of bottles of nasty salt laxative, which caused me to set up residency on the toilet for the following 12 hours. When that ordeal was over, and I’d reread several Harry Potter novels while praying for death, my husband drove my visibly lighter self to the office, where I was given a date rape drug and violated by a yard-long camera spelunking through my butt. When I came to, I deliriously told John the story of how a nurse had called me "a tiny thing" as she wheeled me into the exam room. "A tiny thing, John! Can you believe it?! Me! A tiny thing!" Then I passed out and rewoke to tell the story again and again.

Ulcerative colitis, or "UC" as it’s known among the colostomy bag set, is an autoimmune disorder of unknown origins. Part of the inflammatory bowel disease family of fun™, a troupe that also includes Crohn’s disease, UC basically entails an inflamed intestinal track and rectum rife with ulcers. Get diagnosed with UC and you’ll have it for life, with only one "easy" way out: have your colon removed.

Worse, probably, than finding out I had the disease was trying to explain it, as I soon learned when sharing my news with friends and family. "Inflammatory bowel disease" has got to be the least sexy malady out there, trumped only by elephantiasis of the nuts or scabies. Most people have never heard of it, which necessitates at least a brief explanation involving the words "anus and rectum." "But what does it do?" concerned friends ask, to which I usually reply, "It makes me poop my pants." Talk about a conversation killer. No one has ever followed that one with "Please tell me more."

Sometimes I find myself wishing UC was more easily explainable, like cancer; cancer is godawful but something everyone knows and understands. The word "cancer," if not cancer itself, is clean and direct and to the point -- the Danish Modern of disease. UC is just embarrassing.

No one really knows what causes ulcerative colitis, and the doctor delivered the assurance that nothing I had done had caused it. But naturally, I felt guilty. "I’m being punished," I decided. "This is all my fault." The stages set in. Denial: "Maybe this is no big deal. Let’s get drunk and play Rock Band with our upstairs neighbors!" Anger: " Screw you, god! Why does everything happen to me?!" Bargaining: "Maybe if I start doing yoga and eating a macrobiotic diet I’ll be fine!" Depression: "I am defective. I should just die and stop inflicting myself on everyone around me." And finally, Acceptance: "OK, I have UC. Now what?"

I’ve been in the "now what" stage for five years now. Five long years of drugs and supplements, diets, restrictions and experimentation. Some of it helped, some of it didn’t. But I just keep trying because the alternative is having part of my body removed or giving up altogether. There have been stretches when I was just fine, and could forget and pretend I was normal. There have been other stretches when I’m tired and angry, buying adult diapers and almost passing out on walks. Even as I begin to slip into remission, there are painful reminders: my rotten teeth, the ache of my joints, the way I nervously scan every establishment for its bathroom before I can relax. I will never be the same and I know it.

But because of this experience, and its ongoing effects, life looks totally different. Most days it’s easy to be grateful. Whenever I’m whining about our rusty 15-year-old car or our messy house, I have to take a step back and thank god I’m basically well and still functional. Every day without an accident is a cause for celebration. I may be broken, but I’m not just a brain in a jar. I’m alive. And I plan to stay that way.

Cedar Burnett is a freelance writer and toddler wrangler living in Seattle. She is currently working on a book about living with ulcerative colitis.