Atlas sucks: Failing film producer vows to give up

The market, in its infallible wisdom, declares Ayn Rand boring 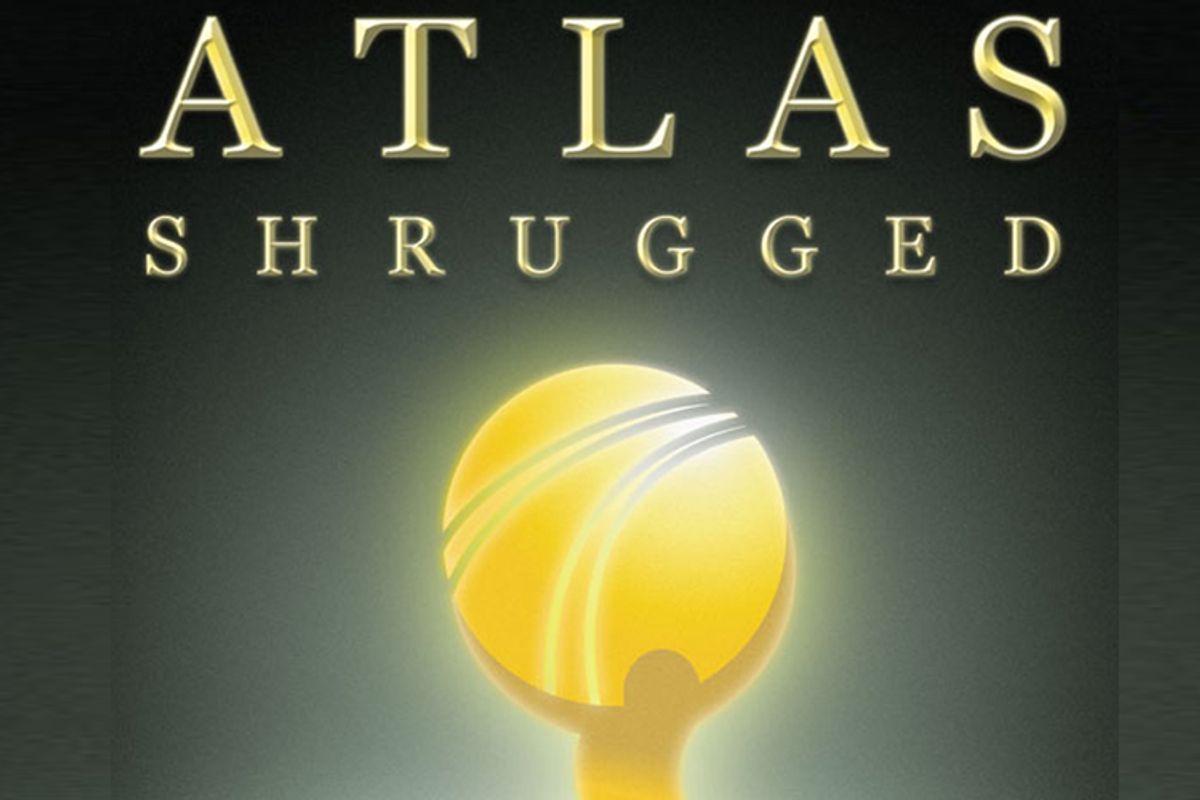 The poster for "Atlas Shrugged"
--

Despite the objective fact that Ayn Rand is the finest philosopher in history and the greatest novelist ever born, "Atlas Shrugged," the film version of her magnum opus, is not doing very well at the box office. After a very good opening weekend in limited release, "Atlas Shrugged: Part 1" quickly sank upon opening in more theaters.

And so its producer, an exercise equipment company CEO (I mean a DYNAMIC PRIME MOVER) who spent $20 million of his own money to finally put Rand's vision on the big screen, is giving up. The film will not expand to 1,000 screens. The second part of the trilogy will not be produced. (That is the real shame, here: The second part is where hundreds of people die horrifically of asphyxiation. And the best part is that they all totally deserve it for being "looters.") (No one will miss part three, which would've just been a three-hour-long speech.)

And so John Aglialoro, the film's producer, will "go Galt" and retire to the desert, where his ability to manage a company that produces exercise equipment will allow him to create the perfect society:

Though the film has made only $3.1 million so far, Aglialoro said he believes he'll recoup his investment after TV, DVD and other ancillary rights are sold. But he is backing off an earlier strategy to expand "Atlas" to 1,000 screens and reconsidering his plans to start production on a second film this fall.

"Why should I put up all of that money if the critics are coming in like lemmings?" said Aglialoro, who is chief executive of the exercise equipment manufacturer Cybex. "I'll make my money back and I'll make a profit, but do I wanna go and do two? Maybe I just wanna see my grandkids and go on strike."

It remains to be seen if you will make that money back, Mr. Aglialoro -- you certainly have not yet come close! -- but I feel like you should be reminded that no one ever asked you to spend 18 years making this movie. You could've spent all of this time "on strike," hanging out with your grandkids!

Back in that first wonderful weekend, when the film briefly looked like a success, the Randians were all convinced that the disdain of critics -- the ultimate looters -- meant nothing. The combined forces of liberal Hollywood, which conspired to keep the film from being made because of their insane devotion to collectivism, were no match for the truth of Rand's words made animate!

Now, though, those stupid critics ruined everything. Damn those all-powerful film critics! Even America's hedge fund managers are no match for their wizardry!

The unfettered free market has spoken: Ayn Rand is less important and influential than Will.i.am as a sassy animated bird.

ADDENDUM: Can I just highlight this bit from the Washington Times piece linked above?

By current Hollywood standards, it is a movie that should never have been made. Imagine this story pitch to progressive movie execs: "we have a female heroine, genius entrepreneurs disappearing, and a government conspiring to control its people and their creations. In short, a powerfully persuasive anti-government message."

No, not exactly "Iron Man 3," because that is almost exactly "Iron Man 2." The hero is a genius entrepreneur! One of the bad guys is Garry Shandling playing a (probably Democratic) Senator who wants the government to control the hero's creations! Except "Iron Man" is a man, so POINT RAND, I guess.