"Crashes, Crises, and Calamities": The new science of disaster prediction

Will it ever be possible to predict calamities? An expert explains why we might be close 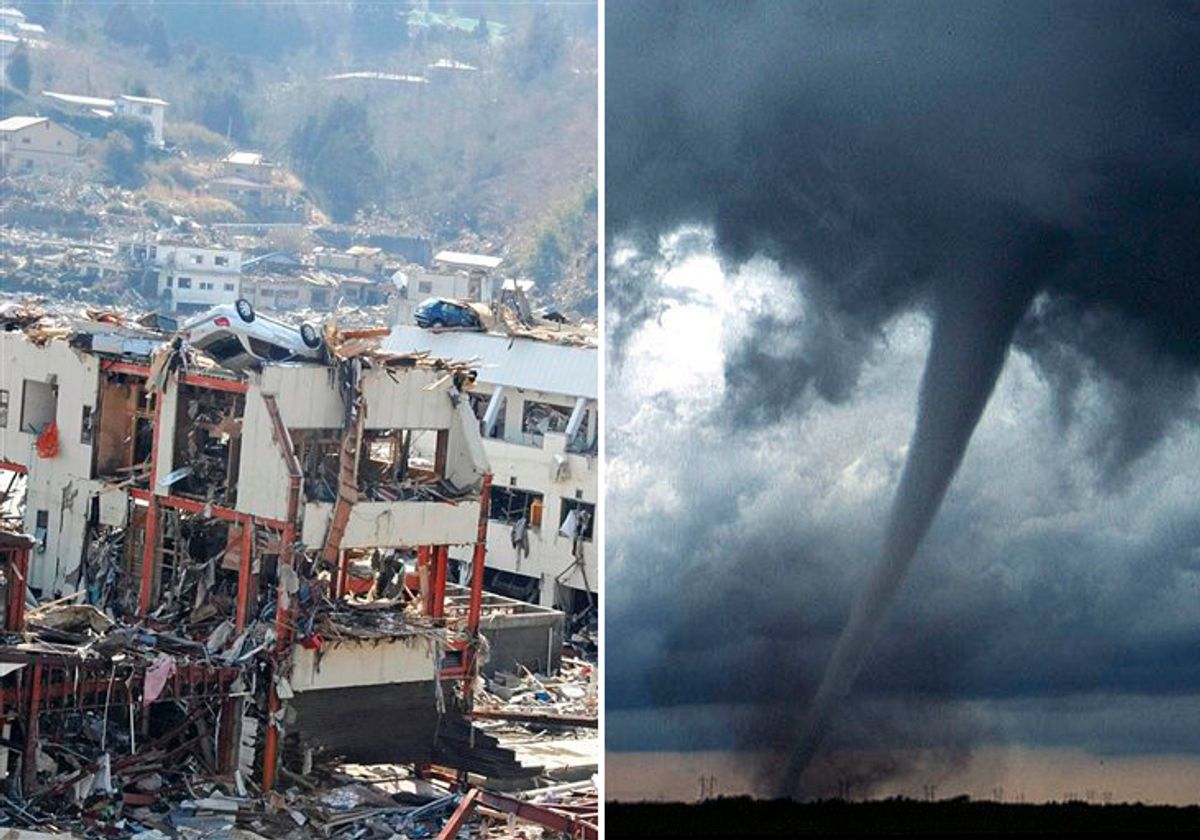 We're never far from disaster. Just look at the current news cycle: While Japan reels from a tsunami and an earthquake, American states are being ravaged by tornadoes, and the U.S. economy is still limping along after the financial crisis of the late-aughts. But what if there was some way for us to predict when a disaster was about to occur? According to Len Fisher and his new book "Crashes, Crises, and Calamities," there are signs we can look for that an ecosystem, a banking system or even a marriage has been knocked off balance and is heading for a wreck. Impending collapses are broadcasting signals of erosion long before they crumble -- and the signs, he argues, aren't hard to follow if we know how to read them.

A research scientist and winner of the Ig Nobel Prize (for scientists who make discoveries that "first make people laugh and then make them think"), Fisher explains the business of calamity prediction in accessible prose and everyday anecdotes. The third in his series on the science of the ordinary (previous entries were "Rock, Paper, Scissors," and "The Perfect Swarm") "Crashes, Crises, and Calamities" is a toolkit for understanding what is at stake in our lives and for the planet -- and what happens when we don’t understand what a disaster looks like in the making.

Fisher spoke to Salon over the phone about three simple signs to heed, what animals sense that we don't, and why predicting the future is more realistic than ever before.

There's a long, spotty history of trying to predict the future. Can you talk about that?

People have always been trying to predict the future. Of course, when it comes to predicting the future of society, nothing has worked, even when you look at modern economic methods of prediction, which are very often based on the assumption that the future is going to be the same as the past. That's the same as the Egyptians and Sumerians, who drew correlations between the position of the stars and the growth of crops and attempted to apply that to the future. The whole point of critical transitions and sudden change is that the future is totally different from the past. Basically, any attempt to predict critical transitions is nonsense, and I include people attempting to use biblical prophesies. I especially include them, I’m afraid.

This is our first real chance to predict when dramatic changes are about to occur. We haven’t been in this position before, right through history. Learning how to use it in time is the next step, and I’m not sure that we will.

What has changed that allows us to make better predictions now than in the past?

We have not had these very powerful computers that could put in the work to make the signals show up against a very noisy background. We’re in a similar position now as we were in the old days of television: You knew a picture was there, but you weren’t quite sure what it was about. As it improved, it became sharper and the background became less murky and snowy. The same thing is happening with the analysis of the fluctuations in different situations.

It’s a very simple idea that applies to a huge range of problems, from predicting social catastrophes to global catastrophes. It's looking for the subtle early-warning signs. It’s a bit like watching a swan swimming across a lake. It looks like the swan is going along perfectly smoothly, but underneath there’s a whole lot of things happening: Its feet are paddling furiously, it might run into something. We call those "critical transitions," when something dramatic is going to occur.

When things are going smoothly, there is a balance between processes that are working to maintain control. And when these processes get out of balance, you get a "runaway." In a marriage, there might be a family argument -- someone says something that provokes someone else to say something nastier, and you get this escalation. In physics we call it the runaway effect.

When you get a dramatic transition it is because the runaway process has taken over and the question is: How can you tell when that’s going to happen? Until recently we haven’t had a clue, and it's been with the aid of some very sophisticated mathematics, which I don’t go into in the book, that we can see what happens when we get close to one of these critical points. There are subtle warning signs, weak signals that you have got to keep your eyes open for.

What are these warning signs?

One of the signs is more extreme conditions. In a relationship, for example, you might get a period when you have violent arguments and then periods when you’re lovey-dovey. If you get these extremes, or these things happen more frequently, that’s a warning sign that you’re getting very, very close to collapse.

Another thing that happens is quick fluctuation between different states, like, for example, when the cod fisheries collapsed in Newfoundland. The fishermen wouldn’t believe it because they had one or two years of good catches, but if they had been aware of [the warning signs] before that ultimate fluctuation between high fish stocks and low fish stocks, they would have said, "uh oh."

The third warning sign is loss of resilience. When something happens to disturb the situation, it can be very hard to recover. I like to think of that in terms of a relationship: You think you’re getting along OK, you’re agreeing and you go out to a party. Then something happens. One person gets offered a drink and takes it, and the other gets mad. Rather than recover from the situation and apologize, they glower at one another all night, and it gets increasingly hard to recover from the disturbance.

How much can the average person do to predict disaster, or is it all up to the people in lab coats?

Just a month ago, I was playing five sets of tennis three times a week when I just happened to slip and sprung a small hernia. I saw a hernia surgeon, and he said, Oh by the way, if you’re going to have an operation, you’re probably going to need to have an examination first by a cardiologist. So I went and saw the cardiologist, and he did a few tests on me, and the result is that I am going to have a triple bypass because he found that I had two blocked arteries, and I didn’t have a clue.

But I might have noticed, applying the theories of my own book, that for a few months what’s been happening is, I’ve been having periods of extreme energy and then extreme lethargy, and swinging between extreme states.

Were there warning signs for the recent disaster in Japan?

Tsunamis, earthquakes, volcanic explosions, are the most difficult things to predict because they are the simplest. The warning signs are most apparent in complex situations, but predicting these one-off natural disasters is very, very hard.

Mind you, if you look on a very large scale, building a nuclear reactor on the ring of fire doesn’t strike me as the most sensible thing to do. Plenty of warning signs there, aren’t there?

There have been stories about animals running away from home before an earthquake for as long as I can remember. You talk about this a bit in your book -- can we really rely on animals to help us see into the future of earthquakes or tsunamis?

I don’t think anybody has looked closely enough at whether animals really do, on a regular basis, act strangely before an earthquake. But if they do, then why would they? One possibility is that animals are responding to something quite physical. If we could find out, and if it was a real effect, and we could measure it sufficiently to check that this is what the animals are picking up, then we wouldn’t need the animals. But it’s not clear. My guess, and it’s only a guess, is that animals do pick up weak signals and that they do respond to them with fear.

I was in Sri Lanka just a fortnight after the Christmas Day tsunami, and our driver happened to be in the region south of Sri Lanka just before it came. He told us that there were many animals that he saw heading for the hills. That’s another story that reinforces the idea that animals might be picking up something. It might be changes in pressure. All we know is that we don’t have that sense.

How does Western society deal with predicting the future differently than other parts of the world?

We’re a bit more self-absorbed, and we talk about individual freedoms and individuality. But that concept is quite alien to some other cultures. Some cultures think in much more of a group mentality.

It’s a scary question, because you start asking a question like this at a dinner party and you get people who have been thinking about this, and the future of the world, and it always comes back to the one thing where no one is prepared to grasp the nettle. We can talk all we want to about predicting the future, but the one thing you can predict is that the continued growth in population is going to lead to catastrophe. Underlying it all -- our behavior, our pollution, our use of resources, the way that we muck up ecosystems -- underlying all that is the fact that there are just too many damn people. And there’s no way that everyone in the world could live at a moderate Western level. There’s not the resources. You can make that prediction without talking about fluctuation or talking about extremes.

And it is very hard, but our best chance is to look for those weak signals. Our best chance is not to wait until the event is almost upon us. Look for the tiny little hints beforehand and say, "OK, look, something is coming up here. Let us prepare ourselves. It’s important and really does matter."