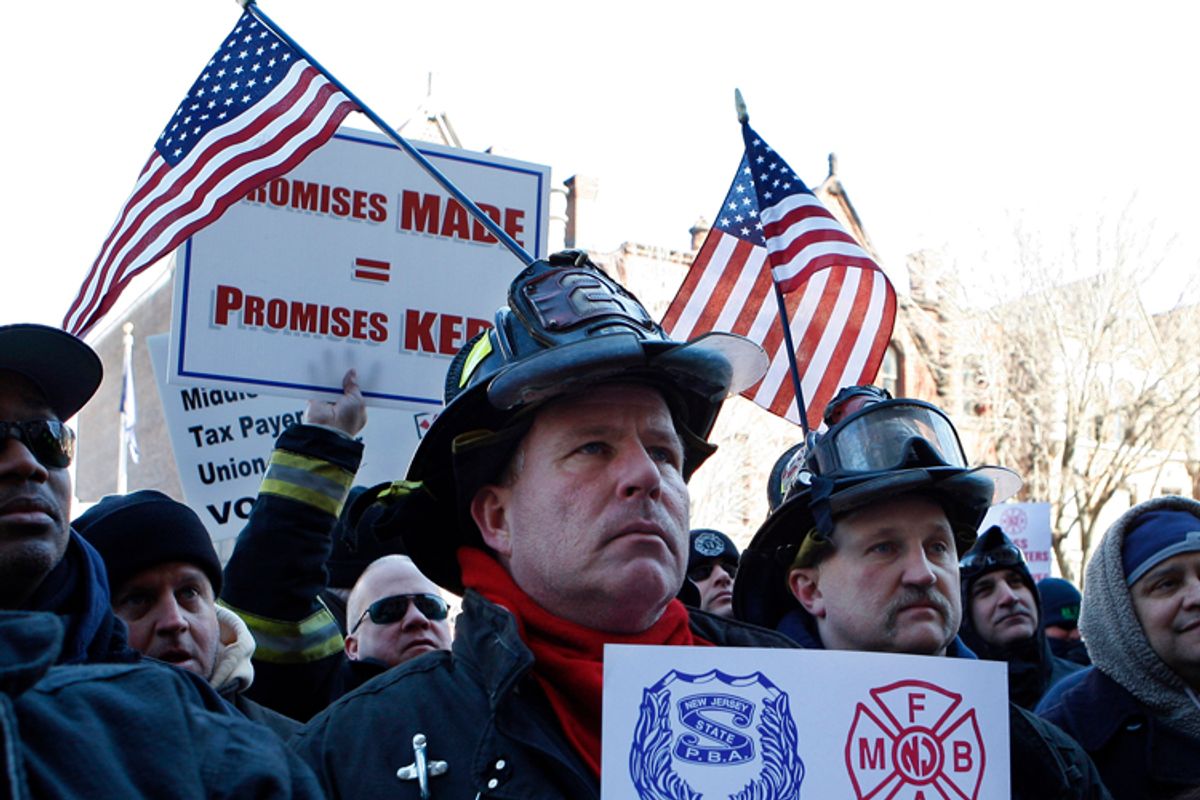 Elizabeth Fire Department firefighters Rick Maliniak, center left, and Andy Socha have American Flags stuck in their helmets as they stand with other firefighters and police officers and their supporters in a large gathering outside the Statehouse Thursday, March 3, 2011, in Trenton, N.J., during a rally to protest staff cuts and promote public safety. They say budget cuts and layoffs have thinned their ranks to unsafe levels. The rally is the second at the Statehouse in a week. The AFL-CIO sponsored a unity rally for Wisconsin state workers Friday. They are fighting limits on their right to collectively bargain. (AP Photo/Mel Evans) (Mel Evans)
--

It's no secret that union leaders in Washington have been loyal, unquestioning servants of the Democratic Party for decades. But on Tuesday, that relationship may have started to change -- and that's probably good news for rank and file union members.

First, some history: Since 1990, organized labor has taken a half-billion dollars worth of workers' dues and has given it to national Democrats in the form of campaign contributions. In return, those national Democrats have aggressively pushed corporate-written trade pacts that undermine unions; worked with Republicans to defund uniformed unionized public employees; failed to use their 60 Senate votes to pass the Employee Free Choice Act; embraced school "reform" rhetoric crafted by corporate foundations that deliberately demonizes teachers unions; and refused to robustly support worker protests against the new GOP assault on collective bargaining -- despite explicit promises about putting on comfortable shoes and walking the picket line.

This has happened, in part, because key union leaders in Washington have assured national Democrats that no matter how many times they undermine the labor movement, the labor movement will be there to underwrite national Democrats' campaigns. And these assurances haven't been subtle -- they've been overt, as evidenced by the behavior Gerry McEntee, the longtime president of the American Federation of State, County and Municipal Employees (i.e., the union that has been among the top individual funders of federal Democratic candidates).

In 2007, for example, McEntee attacked a group of rank-and-file liberal activists (including union members) for trying to replace anti-labor Democrats with pro-labor candidates, delivering a speech to House Democrats saying, "I'm the sheriff of the incumbent-protection program, and if you need help, let me know. In Blue America, there's no room for PACs to chase vulnerable members they have differences with." He later endorsed NAFTA architect Rahm Emanuel for Chicago mayor over other pro-labor candidates and told union members critical of Emanuel to "suck it up." All this in order to back the same Rahm Emanuel whose new administration seems poised to privatize public sector jobs.

McEntee epitomizes the behavior of most of the union leadership in Washington -- currying cocktail party invitations and Christmas cards from Democratic friends in the Beltway, these leaders have made union dues to Democrats what the TARP was to Wall Street: a no-strings-attached bailout to transgressors, regardless of what those transgressors have done or what they will do. In the process, these union leaders have created a moral hazard that effectively encourages Democrats to defy labor, knowing they will then be able to raise corporate money and yet still retain the financial support of labor.

That is, until now.

In a letter to his membership Tuesday, the president of the International Association of Firefighters announced that a unanimous vote of the union's executive board had frozen all campaign contributions to all federal candidates. Citing both the "extremist" Republican agenda and the refusal of Democrats to "stand up and fight for us," Harold Schaitberger said the resources now denied to federal candidates would be spent in states, where local Democrats have been much more willing to defend the labor movement.

It's hard to say if this will begin a larger trend -- after all, organized labor loyally financed national Democrats after every boot to workers' faces, whether that boot was NAFTA , China PNTR or a stalled EFCA. But with President Obama now aggressively triangulating against unions with a push for the anti-labor South Korea and Colombia free trade agreements (the latter of which he promised to oppose), the firefighters' move will finally spotlight the downside of labor leaders union leaders putting their personal partisan affinities above their responsibility to jealously advocate for their members. In short, it will force other union leaders to at least fully explain their decisions to keep pumping workers dues into a national Democratic Party that seems increasingly hostile toward labor's agenda.