LIVEBLOG: With immediate reactions from Trump, other outspoken birthers and bloggers 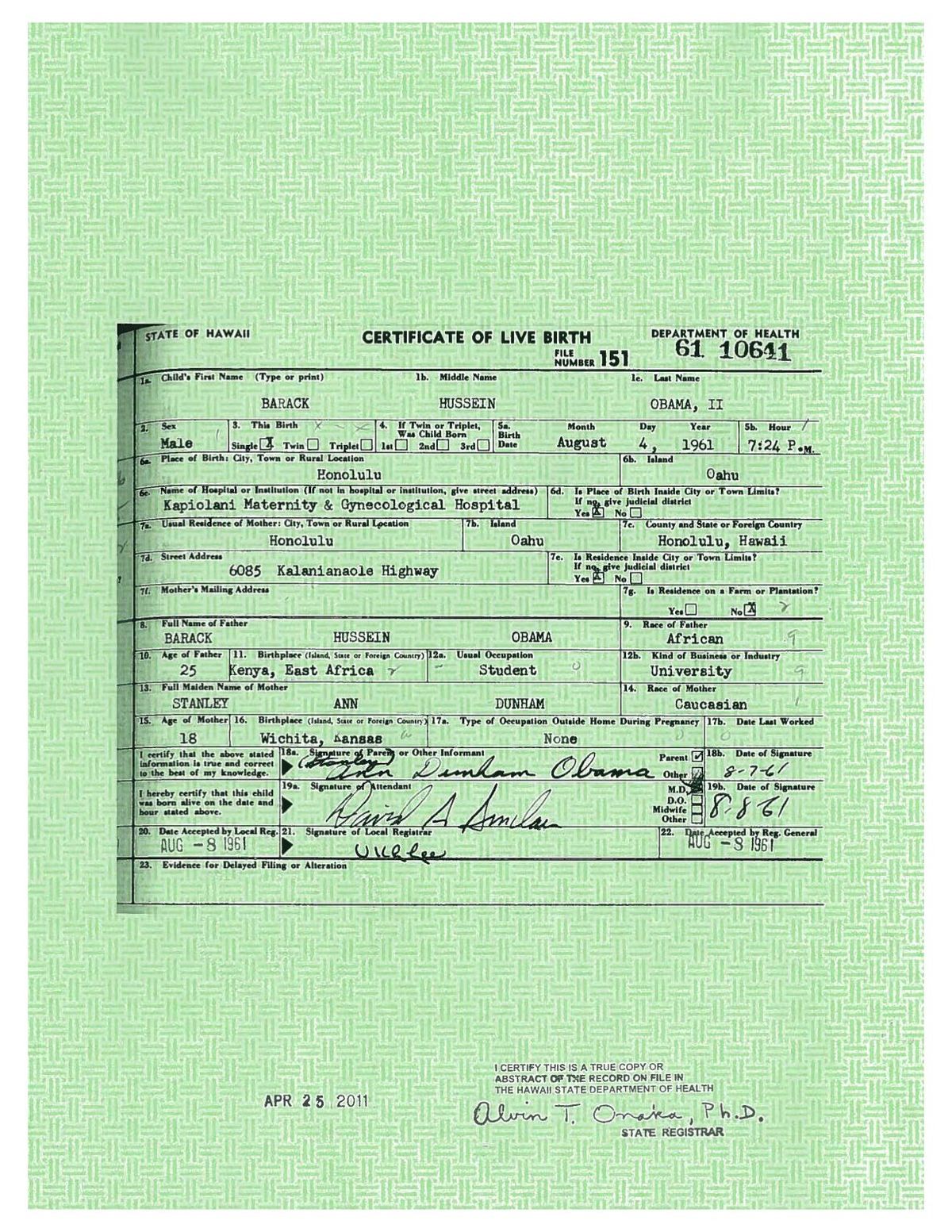 Update (14:50): Our own Justin Elliott helpfully reminds WND's CEO Joseph Farah that he promised in 2009 to "send a check in the amount of $15,000 to whatever birth hospital is listed on [Obama's] long-form birth certificate."

Seems like it's time to pay up, check payable to Kapi‘olani Medical Center.

Donald Trump said he’d release his tax returns as soon as the president released his birth certificate, so the ball is in his court now and I know everybody is anxious to see his tax returns over the last 10 years.

Forbes' Keren Blankfeld echoes the sentiment, urging Trump to show us his "worth certificate".

Update (13:49): Markos Moulitsas writes on the Daily Kos that Obama made "a canny move" in releasing the birth certificate and lists a number of reasons why.

He points to Karl Rove's argument, that "the issue is impossible for the media to cover without making Republicans look insane":

So the more Team Obama can focus attention on the fact that just a third of Republicans believe Obama is a U.S. citizen, the better for Team Blue.

So today's move was nothing short of brilliant.

Worth noting, perhaps that the Daily Kos was the first place to publish Obama's short-form birth certificate in 2008 when birtherism first gained momentum.

Update (13:38): David Frum makes perhaps the most important point about birtherism on his blog. The interesting issue, which the media should pay attention to, is not the president's nationality, but that sustained skepticism over it is so utterable:

Now the more haunting question: How did this poisonous and not very subtly racist allegation get such a grip on our conservative movement and our Republican party?

I know there will be Republican writers and conservative publicists who will now deny that birtherism ever did get a grip. Sorry, that’s just wrong...

... I wish it were otherwise, but it does seem that these racialized attacks on Obama have exacted a toll on him. But they also have exacted a toll on the opposition to Obama. The too-faint repudiation of birtherism by regular Republicans has shaped not only the Obama brand, but also the Republican brand. It was not only white people who heard the implied message about who counts and who does not count as a “real American.”

Update (13:24): Wondering how this might impact state level birther bills? Slate's Dave Weigel gets an idea from a Texas state legislator, who is still unconvinced about Obama's credentials. He spoke to Sharon Guthrie, the legislative director to Leo Burman, a Republican, who has introduced a bill that would require proof of citizenship from presidential candidates:

"What I've seen online, what they produced today, still says certificate of live birth across the top," she told me. And she's right.

But why isn't that just a nomenclature issue? Why does it matter?

Guthrie is referring to an internet rumor that Lucas Smith, an Iowa activist, found a birth certificate from Kenya that contains all the information skeptics want to see from Obama. It was introduced as evidence in one of Orly Taitz's filings. The problem: That certificate is forged.

Update (13:09): House Speaker John Boehner's spokesman Michael Steel tells Politico that, for the speaker, "this has long been a settled issue".

However, as the Washington Post's Greg Sargent argues, the Republican leadership -- Boehner included -- has stopped short of denouncing birther efforts:

Earlier this year, Boehner was still playing it too cute by half, leaving the birtherism door open a crack. Though Boehner said on Meet the Press that he believes the President was born in Hawaii, he said he wouldn’t disabuse others of their birther notions: “It’s not my job to tell the American people what to think.”

The speaker's response today is a far cry from taking responsibility for birther elements in his party, which are unlikely to be silenced even in light of the long-form birth certificate release.

Update (12:14): The rise of the 'Certer' movement? The Smoking Gun draws attention to details on Obama's long-form birth ceritificate that die-hard birthers will likely jump on and question.

Update (12:10): Here's a link to the full transcript of the president's remarks this morning.

Update (11:55): Andy Martin, the so-called "birther king" and, apparently, GOP presidential hopeful, credits himself with launching the birther movement in 2004. His blog page today announces that Martin "can claim a complete victory in delegitimizing Obama and distracting his administration. Obama surrendered."

In an interview with Mother Jones, Martin says he is still not satisfied:

Martin, however, says that the birth certificate doesn't put to rest other questions about Obama's past and rise to power. Echoing Donald Trump's recent demands to see Obama's college grades, Martin said he wants to see the "admission files and the transcripts" of Obama’s college years. "The pressure for his college records is going to become relentless," he vows.

Update (11:45): Fear not, beligerent birthers! Our own Alex Pareene offers up a birther's guide to staying relevant in a post-"long form" world. He assures:

Do you give up? Do you stop constantly emailing journalists and bloggers accusing them of being part of the cover-up? Do you quit commenting on FreeRepublic? Return your WorldNetDaily survival seed bank unopened? No! Of course not!

Update (11:37): Rev. Jesse Jackson emphasizes to Politico's Ben Smith Wednesday that birtherism is a racial issue. "Any discussion of his birthplace is a code word," said Jackson. "It calls upon ancient racial fears."

Smith notes that Trump's birther strategy has drawn ire from a number of black leaders.

Update (11:11): Andrew Sullivan asks what many are probably thinking: Why did the president take so long to do this? Sullivan notes that it was "ethically legitimate" for Obama to deem it unnecessary to publish a long-form birth certificate for so long, but that he should have acted "long ago".

The blogger also presses the media to always err on the side of scepticism and demand more information from our politicians. This may or may not be an oblique reference to Sullivan's recent interchanges with Salon over the circumstances of Trig Palin's birth.

Sullivan has devoted significant blog space to questionning whether Sarah Palin is really the mother of three-year-old Trig. Salon responded with an extensive debunker of the rumor and the alleged impetus behind a Trig cover up. Sullivan, in turn, argued that journalists should keep pushing for more information (a position he supports regarding Obama birtherism too). Our in-house Trig-birther expert, Justin Elliott, responded to Sullivan.

Update (11:04): Top birther, Phil Berg, the attorney who filed the first birther lawsuits, is still unsatisfied. According to Business Insider, Berg is now arguing that Obama renounced his American citizenship when he was adopted by his stepfather Lolo Soetoro while living in Indonesia

Update (10:53): Justin Elliott on the responses from birthers so far.

Update (10:48): Our own Steve Kornacki on why this will not shut up Trump. And Joan Walsh on the president bowing to birtherism pressures: When bullies win.

Update (10:27): The Donald will not let this one slip through his fingers. Predictably, Trump is hailing the birth certificate release a personal victory: "I am really honored, frankly, to have played such a big role in hopefully, hopefully, getting rid of this issue," Trump told reporters as he stepped off his private helicopter in New Hampshire.

"I am confident that the American people and America's political leaders can come together in a bipartisan way and solve these problems. We always have. But we're not going to be able to do it if we are distracted."

The White House unexpectedly released President Barack Obama's long-form birth certificate this morning, potentially putting an end to years of speculation about his place of birth. Obama will deliver a statement to the press at 9:45 a.m.

View a full-sized image of the document here