Was it really just to end the "silliness," as the president says -- or a canny move to make the GOP look "crazy"? 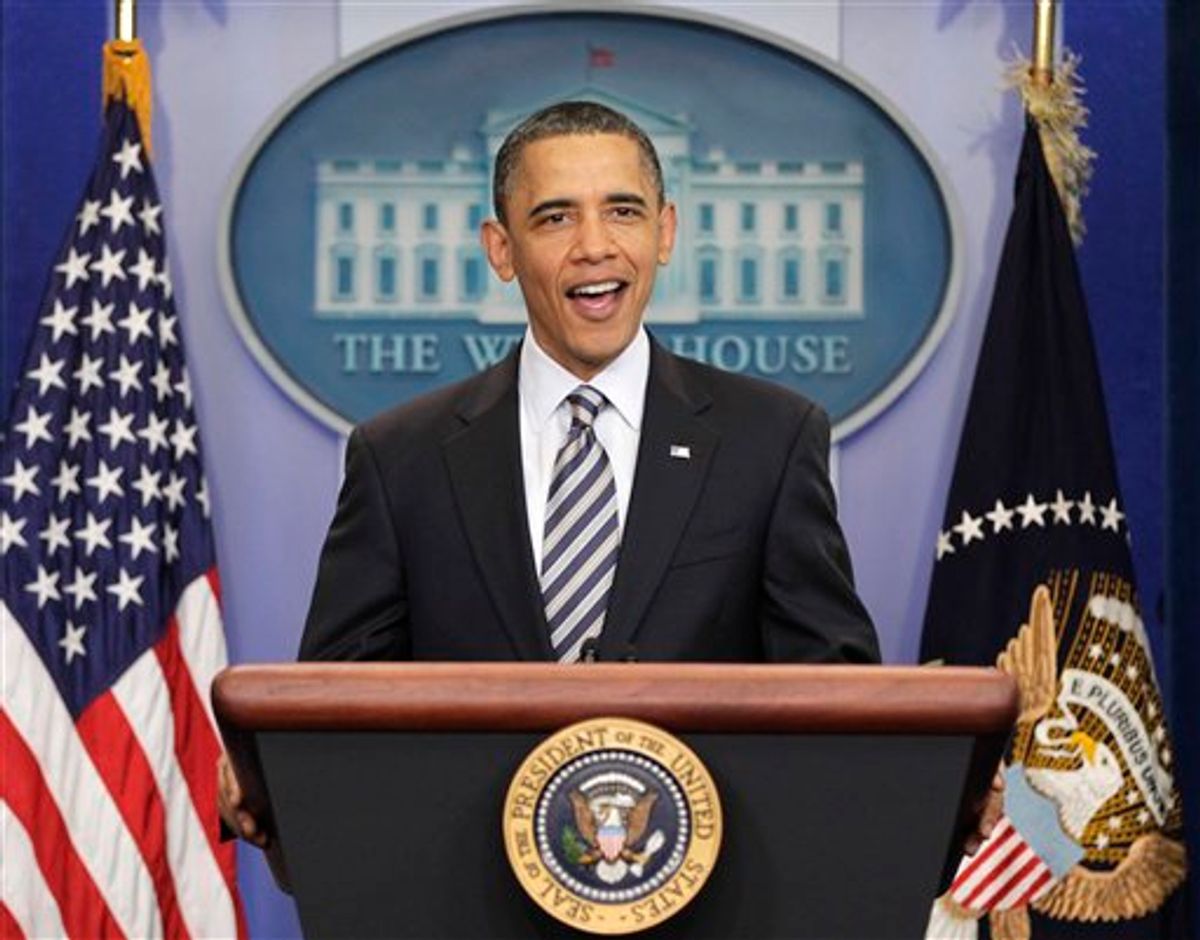 President Barack Obama speaks to reporters about the controversy over his birth certificate and true nationality, Wednesday, April 27, 2011, at the White House in Washington. (AP Photo/J. Scott Applewhite) (AP)
--

During his 2008 presidential campaign, Barack Obama battled a steady stream of falsehoods -- about his religion, about ACORN, about his wife's alleged use of the pejorative "whitey" -- which led to his campaign's launch of its Fight the Smears website in June, to combat some of the more virulent rumors. On the site, it posted an item about Obama's birth certificate -- which included the short-form document -- along with a brief message:

This, obviously, failed to pacify conspiracy theorists, who noted with relish the long- versus short-form distinction. As mentioned in a much-cited defense of the short-form certificate, posted in August 2008 by FactCheck.org, the state of Hawaii normally dispenses only short-form certificates of live birth -- and that document is an accepted form of identification, including by the U.S. State Department.   When skeptics first began making noise about the long-form certificate in the summer of 2008, Obama spokeswoman Shauna Daly said it represented  "all the records we could get our hands on."

Now, it's clear, that statement was not entirely correct. While the state of Hawaii was prohibited from distributing the long-form certificate to third parties, it could waive the policy if Obama or his next of kin personally appealed. Since that time, though, the White House has repeatedly said that the appropriate documentation had been released. For example, on May 27, 2009, Lester Kinsolving of WorldNetDaily pushed former Press Secretary Robert Gibbs to release the location of the president's long-form birth certificate. Gibbs responded:

Lester, this question in many ways continues to astound me. The state of Hawaii provided a copy with the seal of the president's birth. I know there are apparently ... people that continue to doubt the existence of and the certification by the state of Hawaii of the president's birth there, but it's on the Internet because we put it on the Internet.

On July 27, Gibbs was asked, "Is there anything you can say that will make the birthers go away?" -- to which he sternly replied:

The God's-honest truth is no ... If I had some DNA, it wouldn't assuage those who don’t believe he was born here ... The president was born in Honolulu, Hawaii, the 50th state of the greatest country on the face of the earth. He's a citizen.

President Obama himself has denigrated the birther movement and its "misinformation" campaigns, while trivializing concerns about his birth with jokes and asides during appearances at events such as the White House Correspondents' Dinner. The strategy continued all the way into this week when, on Monday, CNN's Ed Henry posed current White House Press Secretary Jay Carney with a question about the persisting controversy.

I would say that we have a lot of problems confronting us. I think CNN recently did a highly credible piece on an established fact, which is that the president was born in the United States of America, and this was a settled issue. It is unfortunate that for whatever reason ... that gets any kind of serious attention.

So why release the much-requested long-form certificate now? Obama, in his press conference Wednesday, said that it was meant to put an end, once and for all, to all the "silliness."

Many took Obama at his word. Many pundits had other ideas about why the release has come now. They roughly fall into these three categories:

Markos Moulitsas at the Daily Kos called the long-form release a master stroke from Obama:

[Karl Rove has] spun his own fantastic conspiracy theory -- that the White House was behind the birther rumors. That was patently ridiculous at the time, but no longer. The White House has smartly thrown kerosene on the fire. Rove is right, the issue is impossible for the media to cover without making Republicans look insane. So the more Team Obama can focus attention on the fact that just a third of Republicans believe Obama is a U.S. citizen, the better for Team Blue.

This wasn't just defense, I think, on the part of the president. This was offense. They saw an opportunity here to portray Trump, and by deflection all Republicans, as engaging in this silly gamesmanship, when the president is engaged in talking about the serious issues.

In engaging on an issue that the administration had long viewed as beneath public discussion, Obama makes a bet that he can take the reins as the ringmaster in a political circus that could present long-term political perils for Republicans and convince the American public that he’s the responsible adult in a political arena increasingly filled by sideshow attractions.

Obama was feeling the heat from birthers -- and Trump

John McCormack of the Weekly Standard believes that the birther conspiracy was detrimental to Obama's electoral chances:

Perhaps the Obama White House really concluded just now the issue is "bad for the country," but it's equally if not more plausible that, contrary to the White House official's statement, Obama finally concluded the issue is bad for Obama. More people than ever now doubt Obama is a natural-born citizen, and Donald Trump's talking on TV about the birth certificate for the past month hasn't kept Obama's poll numbers from ticking downward.

The obvious answer to that ... is the White House people must have concluded that Donald Trump is getting some traction by bringing this up again ... And finally decided they had to bring it to a halt.

Obama wanted to distract us from Ben Bernanke!

At least that's what Sarah Palin and Glenn Beck would have you believe.