Can gas prices doom the president?

Maybe, but his pushback on industry subsidies is smart. Plus: Limbaugh bashes Boehner for even thinking about Obama 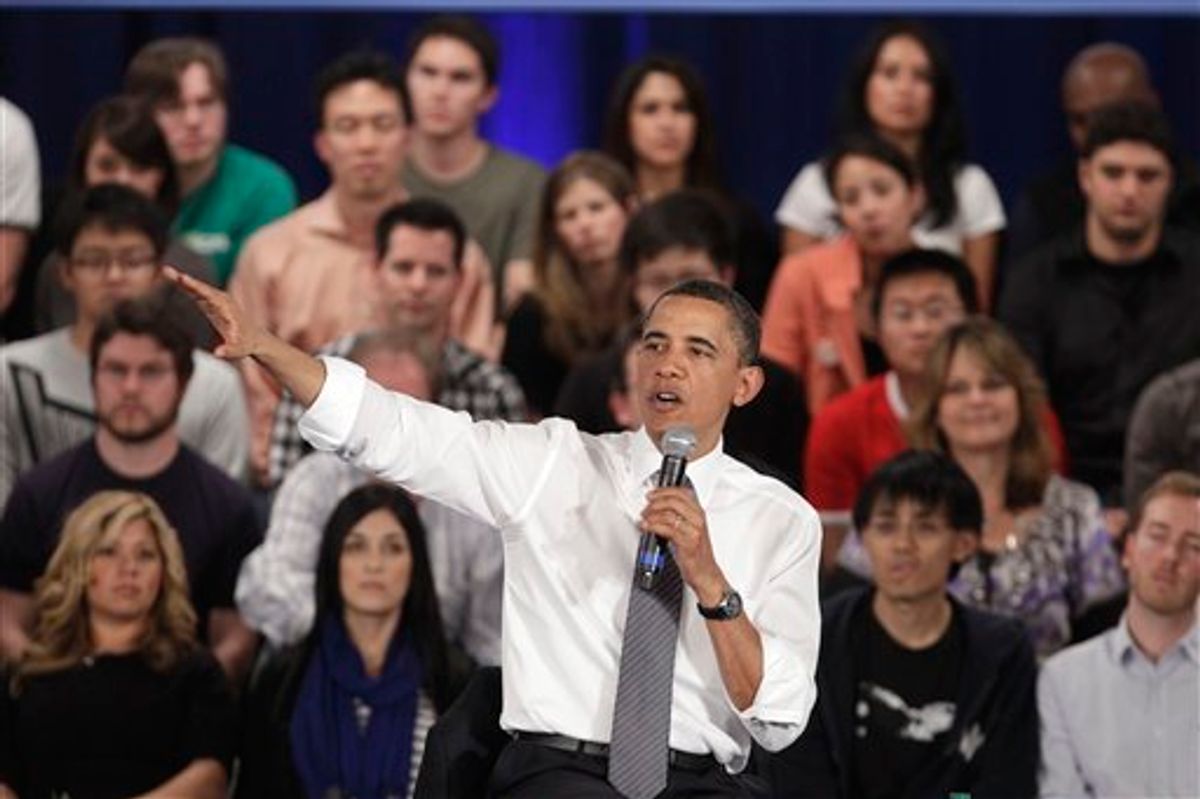 All kinds of polls show President Obama in political trouble if gas prices keep climbing, and right now there's no reason to expect them to plateau soon or for long. So I've been impressed by the administration's desire to try to turn the debate to oil company profits, doubling down on its plan to cut $4 billion in oil and gas subsidies, especially while profits are soaring, to invest in renewable energy. It happened in 2008, during the last price spike, and it's happening now: Oil company profits are at near-record highs, approaching 2008 rates; Exxon/Mobil is looking at a 45 percent increase over last year, and they're likely to have company. It's unconscionable these companies still get subsidies that treat them like a marginal, fledgling industry instead of a pillar of plutocracy.

It made so much sense that House Speaker John Boehner seemed to agree with it. Asked about the president's plan, Boehner told ABC: "I think we gotta take a look at it."

Wow. Political courage. Awesome. Not so fast. When the president tried to take Boehner up on his willingness to "take a look at it," the speaker reneged.

“The Speaker made clear in the interview that raising taxes was a non-starter, and he’s told the president that. He simply wasn’t going to take the bait and fall into the trap of defending 'Big Oil' companies," spokesman Michael Steel told reporters.

So he was dishonest in his interview with ABC News because he didn't want to fall into a trap?

Boehner's craven walkback wasn't enough for Rush Limbaugh, who pilloried the speaker because he refused to fall into the trap of defending Big Oil. Limbaugh asked: "If I were a political leader and a Republican and the Democrats were hell bent on ending Big Oil subsidies and raising taxes on Big Oil in circumstances like we are in now, is it just me? This may be the difference between working in radio and working in politics. I would defend Big Oil!"

Obama also asked Attorney General Eric Holder to convene a panel to look into oil and gas market speculation and manipulation. Republicans hate that – but George W. Bush made the same request in 2006, when gas hit $3 a gallon. I'm wondering why the president isn't backing the call by Democratic congress members – senators like Sherrod Brown, Bill Nelson, Al Franken and Maria Cantwell, plus House leaders like Ed Markey – to get the newly empowered Commodity Futures Trading Commission to rein in speculation. The senators who made the request say speculative energy contracts have increased 35 percent since the unrest in Egypt began in January; the CFTC could limit the number of contracts big players could purchase, as well as increase the margin requirements for such contracts, to limit the speculative frenzy. There's no guarantee that would bring down prices quickly, but it's worth a try. (Two of three Democratic commissioners support that move; a third, Michael Dunn, has balked; his term is up shortly, and that will be a test of the president's will on this issue.)

Of course, Republicans are again chanting "Drill, baby, drill," even though the Energy Information Agency says our 2010 domestic production was higher than any year since 2003, plus everyone knows even profligate drilling wouldn't change supplies until around 2030, and might never lower prices, given they're controlled on the world market.

The long-term answer is what every president has said since the 1973 oil crisis -- we have to reduce our dependence on foreign oil – yet it never happens. I'm pleasantly surprised that the president is taking the fight to the oil companies this year and defending his long-term agenda for renewable energy.

I discussed this on "Hardball" Tuesday with former McCain economic advisor Doug Holtz-Eakin, whose heart didn't seem to be into GOP claims that the president could do anything to reduce gas prices in the short term: