If you think this will shut Trump up .... 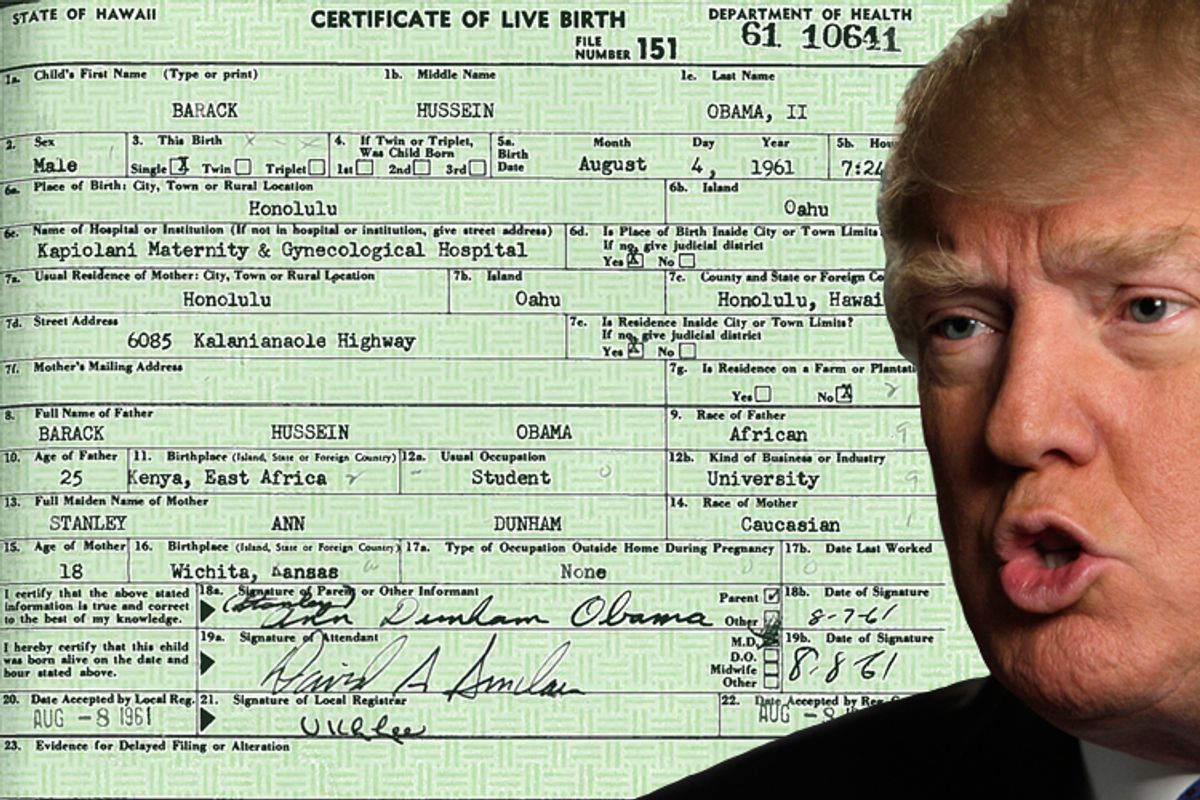 In theory, it made sense, the White House releasing President Obama's long-form birth certificate just as Donald Trump's private jet was about to touch down in New Hampshire.

The idea, perhaps, was that Trump, who'd presumably spent the trip devising a few new birther talking points, would disembark, find himself confronted with a sea of reporters shoving copies of the long form in his face and demanding comment, and -- for once -- be dumbstruck. On national television. Or maybe the idea was just that, against the backdrop of the most irrefutable evidence possible that Obama was born in Hawaii in 1961, Trump would for all of America finally be shown to be the fool that he is.

But that's not how things played out. Instead, Trump stepped off his plane, confidently took his position in front of the cameras and microphones and ... acted like nothing had changed. He noted that it was "amazing" that the long-form certificate finally "materialized" -- not, he quickly, added that he was suggesting any malfeasance was at work. Then he portrayed the release as a vindication ("I hope we've accomplished a lot by what I've been talking about for the last few months") and claimed that he hoped the issue would soon be resolved ... so that we can all focus on Obama's terrible record on high gas prices and his refusal to "stand up" to OPEC. Oh, and for good measure he demanded that Obama release his records from Occidental College, part of Trump's new effort to convince Americans that their president only made his way to the Ivy League (he transferred from Occidental to Columbia) because of affirmative action. For 15 minutes or so, he fielded questions from reporters, until the cable networks cut away for ... remarks from President Obama on the release of the long form.

Did this accomplish anything for the White House? Probably not. To most Americans, Trump has long been a fool and birtherism has long been a joke. If you poll Democrats and independents, the consensus that Obama was born in the United States is overwhelming. The release of the long form -- the most definitive proof that Obama could possibly produce -- won't affect these voters; they were already convinced this whole "controversy" was a fraud.

It's only among the Republican Party base that expressions of doubt about Obama's birth are common. Not at all coincidentally, it' the Republican Party base -- much more than independents, Democrats, the press and even Republican Party leaders -- that has been taking Trump seriously lately. This dynamic won't change, either. After all, as I've written before, birtherism among the hardcore GOP base hasn't really been about the specific details of Obama's birth; it's simply been a way for the base to express its cultural unease with the president. Trump has risen in GOP polls simply because he's offered the most blunt, unvarnished and unapologetic expression of this unease. He's not tried to couch it in winks, nods and code words like mainstream GOP leaders have. Faced with the long form, the GOP base that has rallied around Trump will be as uninterested in backing off as Trump was this morning. So what if he's got a new piece of paper saying he was born in Hawaii? He's still not one of us.

If anything, the White House elevated Trump's stature by its decision today. It could be that there's some devious long-term strategy at work, designed to make Trump and his idiocy the face of the GOP. From that standpoint, maybe it does make sense to put the long form out now. But if the idea was to shut Trump up and to quiet the GOP base, the move has already backfired.