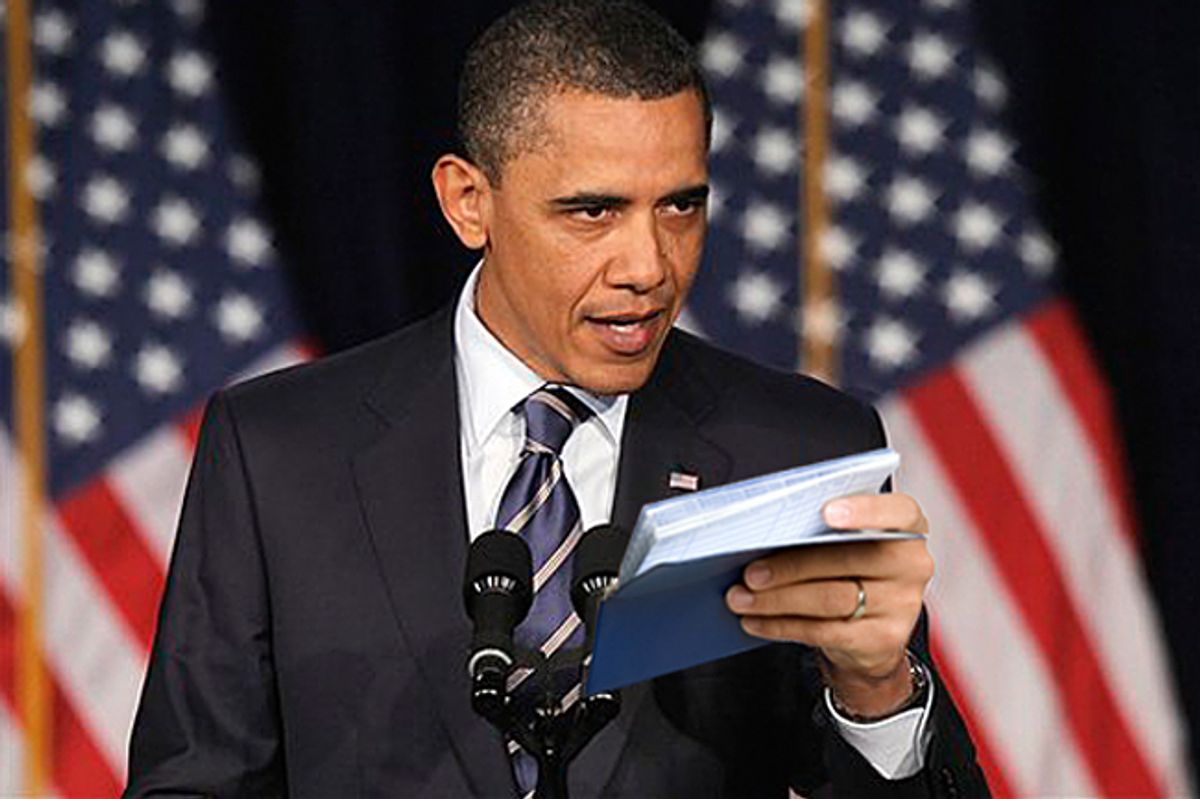 How many outright errors of fact can you spot in the following paragraph from an op-ed by Mitt Romney published this Monday?

[Barack Obama's] approach has been to engage in one of the biggest peacetime spending binges in American history. With its failed stimulus package, its grandiose new social programs, its fervor for more taxes and government regulations, and its hostility toward business, the administration has made the debt problem worse, hindered economic recovery and needlessly cost American workers countless jobs.

Let's see. We're at war in Afghanistan, so "peacetime" is dubious. Obama has cut taxes -- income taxes, payroll taxes, taxes for small businesses. Private sector economic forecasters say the stimulus increased GDP growth and kept the unemployment rate from rising higher. We could even range into the subjective, and argue that from the left side of the political aisle, Obama has been anything but hostile to business and hasn't done nearly enough to regulate the financial sector. And we could note, just for fun, that Obama's "grandiose" social program is modeled explicitly after the healthcare reform enacted by none other than Mitt Romney in Massachusetts. (And this guy, most political analysts think, poses the biggest threat to Obama's reelection!)

But nothing is more ridiculous than the notion that Obama is a "binge" spender. Paul Krugman rightfully calls this scurrilous accusation a "zombie lie." No matter how many times you kill it, whether by decapitation, a spike through the heart or immolation -- it just keeps coming back. It's enough to make you despair -- particularly when you consider how many more times we're going to hear this nonsense from Romney and the rest of the Republican presidential candidates from now until the last precinct closes on Election Day 2012.

But as long as the undead keep coming, we have no choice but to fight hellspawn with our own holy fire. So let's review the facts.

The current budget deficit is predominantly an outgrowth of the Bush tax cuts, the wars in Afghanistan and Iraq, Medicare Part D and the financial crisis.

Here's the first thing to understand. Before Obama took office, before he was able to spend a single dime as president, the Congressional Budget Office predicted that the 2009 deficit would be $1 trillion dollars. According to an analysis published by the Center on Budget and Policy Priorities in June 2010, about half of that total -- $500 billion -- can be attributed to the Bush tax cuts and the wars in Afghanistan and Iraq. Another $400 billion was a direct result of the "changed economic outlook" -- the collapse of "tax revenues and swelling outlays for unemployment insurance, food stamps and other safety-net programs."

In the summer of 2009, the New York Times's David Leonhardt (recently awarded a Pulitzer prize for his economic coverage) conducted an indispensable analysis of the budget deficit for 2009. (By that point it was projected to hit $1.2 trillion; ultimately it reached $1.4 trillion -- in part because of stimulus spending and in part because the economy continued to get worse.) Leonhardt observed that since 2000, the year that Bill Clinton bequeathed George Bush with an $800 billion surplus, there had been a negative $2 trillion swing in the health of the government's finances. Crunching the numbers from a decade's worth of CBO reports, Leonhardt discovered:

"Mr. Obama's main contribution to the deficit is his extension of several Bush policies, like the Iraq war and tax cuts for households making less than $250,000. Such policies -- together with the Wall Street bailout, which was signed by Mr. Bush and supported by Mr. Obama -- account for 20 percent of the swing."

The CBPP includes a neat little chart in its analysis that brings home the long-term consequences of the decisions made by Bush and Obama. Yes, the stimulus added to the budget deficit in the short term, but over the next 10 years, its contribution to the ongoing deficit -- along with TARP and the Fannie-Freddie rescue -- is minimal. The real drivers of the deficit will continue to be the Bush tax cuts and the wars -- if both continue. The tax cuts alone will account for some $7 trillion of the additional national debt over the next 10 years. And the interest payments on the debt accrued simply to pay for the automatic safety-net response to the Great Recession will also continue making a meaningful impact for years to come, long after a full recovery. Obama, of course, bears some responsibility for continuing the Bush tax cuts and the Bush wars -- but so do nearly every Republican legislator, and it's very difficult to imagine that Mitt Romney as president would have done anything differently. In fact, it's quite possible that the deficit would have gotten worse under Romney, because if he had decided to inject no stimulus at all into the economy, the downturn would likely have been worse, tax revenue would have declined even further, and social welfare spending would be even greater. And if any Republican president had attempted to slash spending in accordance with current party rhetoric, we'd be staring directly into the depths of Great Depression 2.0.

Also crucial to note: Obama's major new initiatives were either designed to be short term, such as the stimulus, or revenue neutral, such as healthcare reform. That's not something you can say about Bush's budget busters.

The budget deficits under Obama are big, there's no doubt about that. But the primary drivers of those deficits are a combination of decisions made by George W. Bush and the worst economic crisis in the United States in 80 years.