Trump has urged Americans to buy less "crap" from China, even as his own line of suits is manufactured there 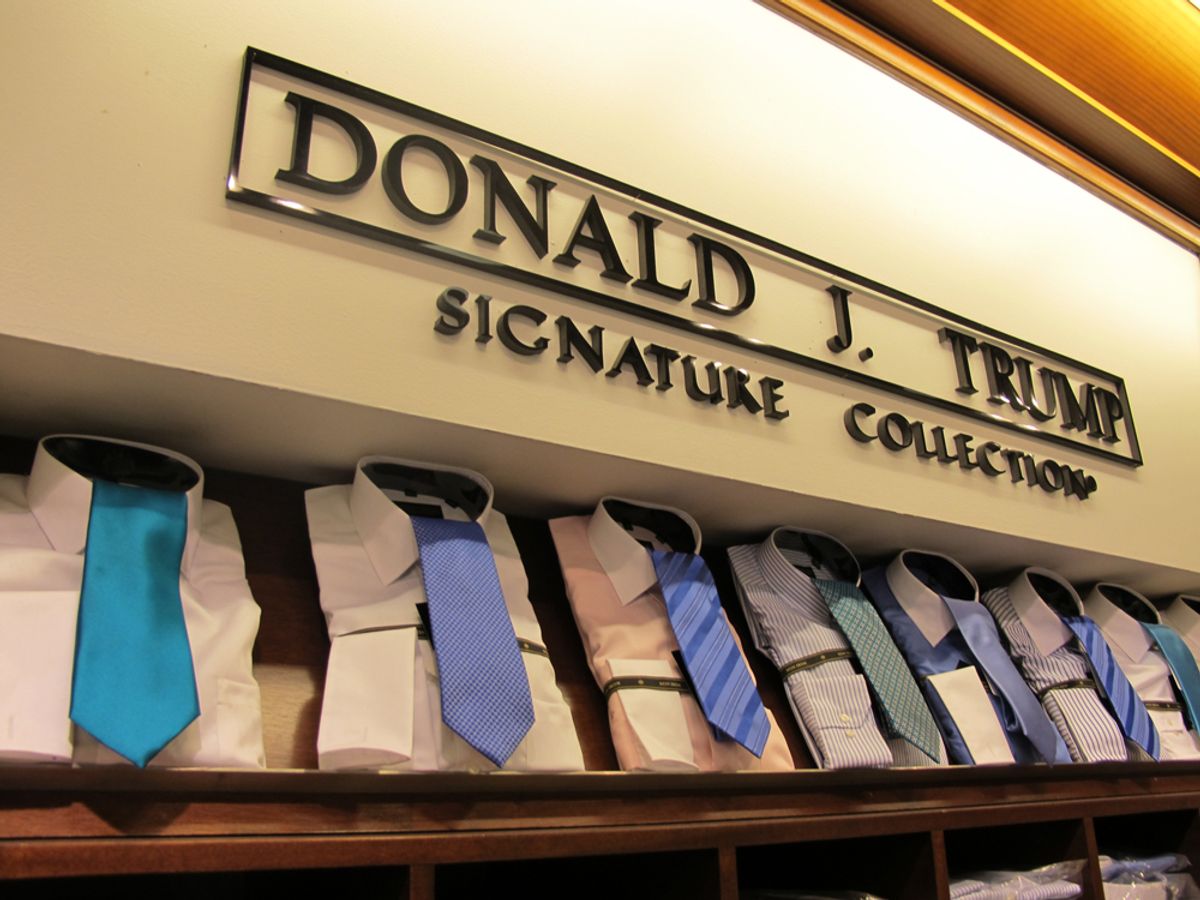 Donald Trump has emerged in recent years as the nation's foremost China basher, going after the Asian superpower for undervaluing its currency and for taking American manufacturing and jobs. So it's at least ironic -- and at most an example of gross hypocrisy -- that Trump's own line of men's wear, the Donald J. Trump Signature Collection, is manufactured in China.

I discovered this after walking from Salon's offices to the large Macy's in midtown Manhattan, where an entire section is devoted to the Donald J. Trump Signature Collection of suits and ties. This particular corner of the store is decorated with an oversize portrait of Trump; the line promises to provide "the pinnacle of style and sophistication" and "the necessities to be boardroom ready all of the time."

Here is the tag on one of the Trump shirts: Yes, that says "MADE IN CHINA." (That pink dress shirt retails, by the way, for $69.50.) Other pieces were made in Mexico and in Bangladesh.

All of which makes it a little strange that Trump's own brand of clothing is made in China.

The phone number listed on Trump's website for the Signature Collection goes to the "licensing coordinator" at the Trump Organization, Amy Steinfeldt. She did not immediately return a call. But it appears that the shirts and ties are made by the Phillips-Van Heusen Corp., which owns a license on the Trump brand.

Here's a typical Trump exchange on China from a year ago on Fox with Neil Cavuto (via Nexis):

TRUMP: And you know, again, the problem with our country is we don't manufacture anything anymore, I mean, very little. China is doing -- I just bid furniture out on a major project I'm doing, and I have six bids. Every bit of furniture is being made from China. The one from America is more expensive because of all the other problems that have been caused by us. So you know, if...

TRUMP: I have to tell you, I did, because you know what? They actually make a much better product. I mean, the product is 100 percent better. The product, the stuff that's been sent over from China is -- it falls apart after a year and a half. It's crap.

In the case of his clothing line, of course, a Chinese factory was given the job.

Here's another telling exchange between Trump and Fox's Neil Cavuto in January:

CAVUTO: We start -- I would imagine a President Trump would then start urging Americans to buy less from China.

TRUMP: Well, I would urge that anyway.

A spokesman for Trump did not immediately respond to a request for comment. I'll update this post if Trump's people get back to me.

(Special thanks to Reader RK for the tip.)