The roots of birtherism go beyond race

What this is really about: The right's instinctive, aggressive rejection of Democratic presidents 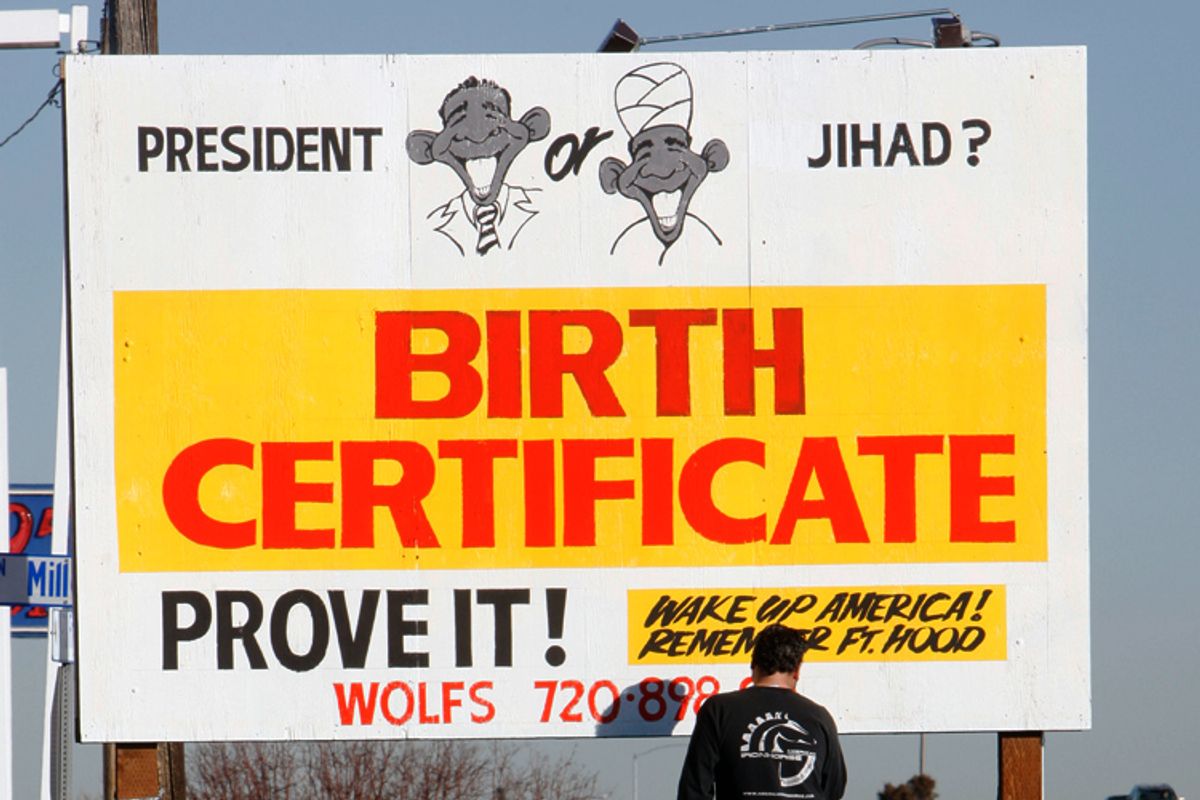 Maintenance man David Lee of Arvada, Colo., puts the finishing touches on a sign featuring President Barack Obama for a sales lot for pre-owned vehicles along Interstate 70 in the northwest Denver suburb of Wheat Ridge, Colo., on Friday, Nov. 20, 2009
--

Let's be clear: Birtherism itself has everything to do with race. It encourages -- and feeds off  -- emotional, culturally driven resentment of President Obama, a sense that he's not "one of us." But as Obama seeks to put all of the zany conspiracy theories to rest for good, it's worth remembering that there's a broader phenomenon that birtherism grew out of: the right's instinctive, aggressive rejection of Democratic presidents.

Think back to the late months of 2007, when it was taken as a given that Hillary Clinton would be the next Democratic presidential nominee. At the time, the right still considered itself at war with the Clintons -- something that had started with Bill Clinton's election in 1992, continued through his presidency, and extended well into his ex-presidency. From the moment Bill left office in January 2001, the right had been preparing for its inevitable showdown with Hillary -- something that looked imminent in late '07, when Obama's campaign seemed to be foundering. Against this backdrop, Obama was typically portrayed by conservative commentators not as a radical, anti-American outsider but as a plucky, well-meaning (if a bit naive) do-gooder who was about to be savagely and unfairly mauled by the Big Bad Clinton Machine.

Shortly thereafter, though, something unexpected happened: Obama started winning primaries and caucuses. Lots of them. By the end of February, he'd built a commanding delegate advantage. Hillary, it became clear, was going to lose. The threat of a Clinton restoration was over. And just like that, conservatives seemed to forget every nasty, terrible thing they'd ever said about the Clintons. The most hilarious example, as I documented at the time, may have been Pat Buchanan, who had famously pilloried Hillary as a radical feminist "lawyer-spouse" during his 1992 Republican convention speech; but as she fell hopelessly behind Obama, Buchanan began portraying her as a folk hero to white working-class voters -- with Obama now relegated to the role of dangerous radical. And Buchanan was hardly alone. It was at this point in the 2008 campaign that conservative opinion-shapers began focusing obsessively on Jeremiah Wright and Obama's other frightening "associations."

This is what birtherism really grew out of: a refusal by the right to accept the legitimacy of any Democrat who comes within spitting distance of the White House.

The story of Bill Clinton's presidency is a perfect example. The attacks from the right -- which began even before he took office -- weren't about his birthplace or citizenship status, but they were designed to fill the GOP base with rage and resentment that a usurper was somehow in the White House. In the early days of Clinton's presidency, the Internet as we now know it didn't exist and cable news consisted only of CNN (which hadn't yet been spooked by the rise of Fox). But through talk radio, newsletters, and widely circulated videotapes, the right devised and promoted one preposterous, inflammatory claim after another: that the Clintons had arranged for Vince Foster to be killed, for instance, or that they'd been involved in drug-running in Arkansas. Clinton's presidency was barely a year old when Pat Robertson told his "700 Club" audience that the president might be forced from office within 90 days. Polling wasn't nearly as frequent or extensive then as it is now; if it had been, we'd probably be able to point to surveys from 1993 or 1994 showing alarming numbers of Republican voters expressing doubt about, say, the circumstances of Foster's death.

The lunacy continued well after Clinton left office, with claims that Clinton staffers had trashed the White House on their way out in 2001 and that Clinton himself had been responsible for 9/11. Why? Because the Clintons were still the face of the national Democratic Party for most of the Bush era (replaced only briefly by John Kerry in 2004), and the threat of a restoration seemed very real. It was against this backdrop that they treated Obama as a sympathetic figure in 2007 -- a poor, innocent guy being roughed up by some bad people. And it was only when Obama and Hillary switched places in the polls that the caricaturing was reversed.

In this sense, race in general and birtherism in particular, are simply the specific tools that the right has used to play the same game it played with the previous Democratic president.