Am I wrong about the futility of airport security?

TSA agents challenged my stance on the "liquid and gel" rules, but I'm still convinced our efforts could be smarter 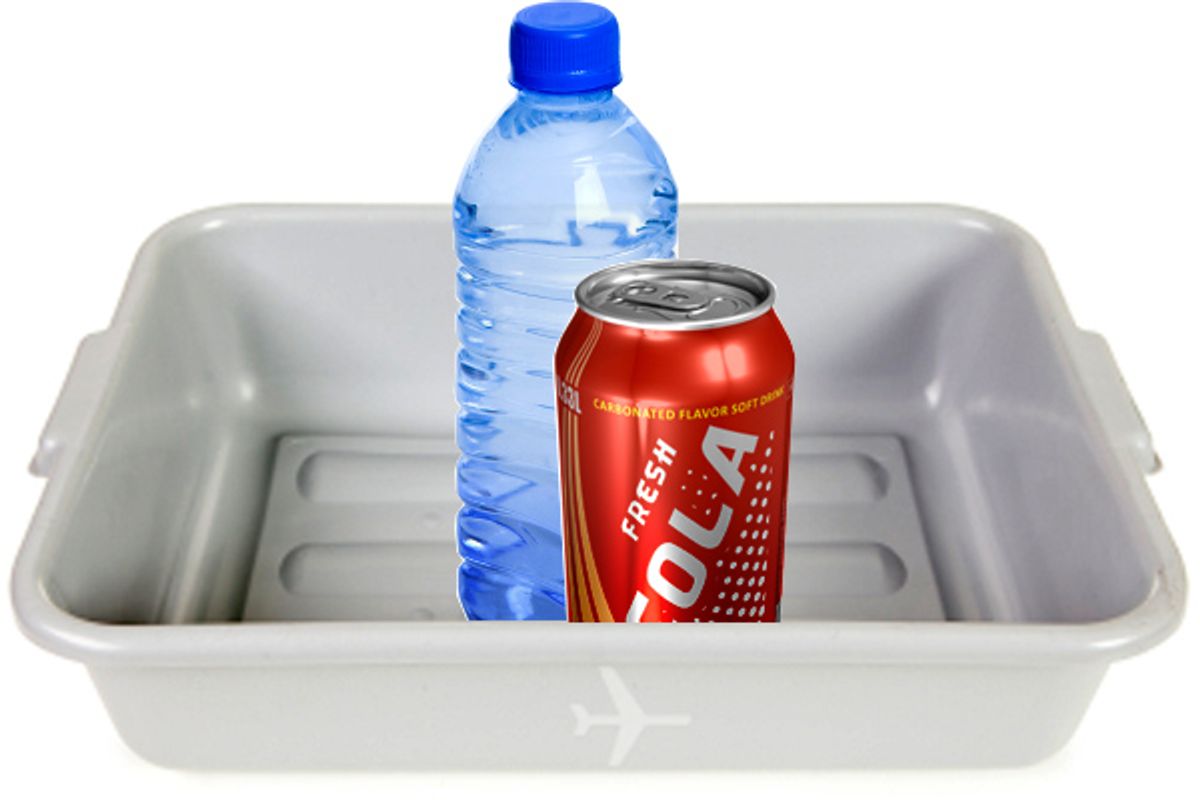 A short follow-up on my latest airport security rant. I had written, in part ...

The three-ounce container and baggie policy is, to begin with, mostly a waste of time. For starters, experts have pointed out the extreme difficulty any saboteur would have in concocting the types of liquid explosives that the rules are meant to thwart. Then, explain the logic of why passengers cannot travel with a 10-ounce bottle of liquid, yet five or more three-ounce bottles is no problem. Contact lens solution, any size, that's OK, too. And baby formula, however much you need.

Well, according to TSA screeners who responded to my story, there's at least a little bit more here than meets the eye. I have met and interviewed TSA officials in the past, but their explanations tend to be a little too carefully worded. It was nice to get some insights from frontline screeners themselves.

"You don't get it," says a screener (they call themselves TSOs, for transportation security officer, but I'm sticking with "screener" or "guard"). "The liquids are minimized precisely because of the difficulty of mixing them into explosives. You also fail to mention that any liquids that are exempt from the size policy must undergo additional testing before leaving the checkpoint. If all passengers were allowed to carry any size liquid, we would be spending all our time testing the liquids and slowing down the process even more."

I maintain that much, or perhaps even most, of what goes on at the TSA checkpoint is Kabuki rather than actual security, but apparently there's some logic to the liquids rules, and I'd be remiss not to point that out.

On the whole, though, TSA's fundamental strategic flaws remain what they have always been: First is the wasteful zero-tolerance policy toward any and all "weapons," perceived or real -- that is, sharp objects and, the above notwithstanding, harmless liquids and gels. The second, more crippling flaw is the one insisting that every last person who flies, be it an infant child or a uniformed crewmember, is a potential terrorist subject to an equal level of scrutiny. I'm sorry, but in a country where more than 2 million people fly every day, this simply isn't sustainable. The system we've created is so huge and cumbersome that TSA's own rules become ultimately unenforceable. As I've said before, you can't keep knives out of a maximum security prison, and here we are trying to keep them out of airports.

And I'm still waiting for somebody to explain the logic of the body scanners. Let's ignore for a minute the audacity of these machines and our capitulation to their existence. (If, a decade ago, we were told that people would soon have to appear naked in order to board an airplane, such a claim would have been met by laughter and outrage. But here it has come to pass.) We're asked to believe the scanners are a critical tool. Yet they are being deployed domestically rather than at airports overseas, and only sporadically at that. Should a bomber notice a scanner at one checkpoint, he merely needs to choose the next one down.

And here's where it's easy to be cynical. Instead of body scanners, why not rely on bomb-sniffing dogs? They're highly effective, unobtrusive, and cheaper -- not to mention cuter. I suspect it's because there isn't a big corporation somewhere that stands to earn billions of dollars from the deployment of dogs. It's doubtful the scanners are making us safer. But rest assured they're making somebody wealthy.

I am not a proponent of racial or ethnic profiling. But for better or worse, some method of profiling needs to be part of the solution. The International Air Transport Association (IATA) has proposed a plan in which passengers will be categorized into one of three risk groups and then screened accordingly. Biometric proof of identity, such as a fingerprint or encoded passport, will be checked against a stored profile containing various personal data, and also against watch lists. This, together with booking data, will determine which of three lines a traveler is assigned to. Those in the first line would receive a cursory check, while those in the third would be subject to an enhanced inspection similar to the TSA procedures that are currently applied to everybody. This wouldn't be perfect -- like many people, I get a little nervous when I hear the words "biometric" and "profile containing various personal data" -- but it's maybe the best idea yet when it comes to restoring sanity to airport security.

The answer is out there. Give us solid law enforcement that will expose criminals and terrorists before they get to the airport, together with good explosives detection, random searches and smartly managed profiling, and we'd have a security strategy that is frankly pretty good. As good as it can be, anyway -- because beneath all of this rests the seldom acknowledged fact that no matter how hard we try, we're never going to make our airports and planes 100 percent safe. Coming to terms with this isn't easy -- but it's also not the same as giving in. We can and should improve our odds. Doing so, however, will require us to be two things thing we thus far haven’t been: rational and reasonable.

Now, on to something more fun...

Just a reminder that you -- yes you -- are invited to attend my third annual Open Studios exhibit, to be held this Saturday and Sunday, April 30 and May 1 at my place in Somerville, Mass. The exhibit is part of the annual Somerville Open Studios event. Last year more than 200 people stopped by, and I'm hoping for a similar turnout.

Once again the exhibit will feature travel photos from my trips -- both work and pleasure -- around the globe. This time, the presentation will mostly be in digital format. There will be several computer slide shows, plus a centerpiece presentation streamed to a flat-screen television. The kitchen will be amply stocked with complimentary appetizers and the finest "Vintner's Choice" examples from Trader Joe's selection of $3.99 wines (limit one glass per visitor). ASK THE PILOT hats and T-shirts will be for sale, so don't forget your wallet.

Yeah, you can view the same stupid pictures on Flickr, but why not see them in Somerville and get a free plastic cup of "Three-buck Chuck"?

WHERE? Somerville, Mass., near Davis Square and easily accessible by subway. RSVP to askthepilot@salon.com for my address.