Why did the president trick so many Republicans into believing lies about him for so many years? 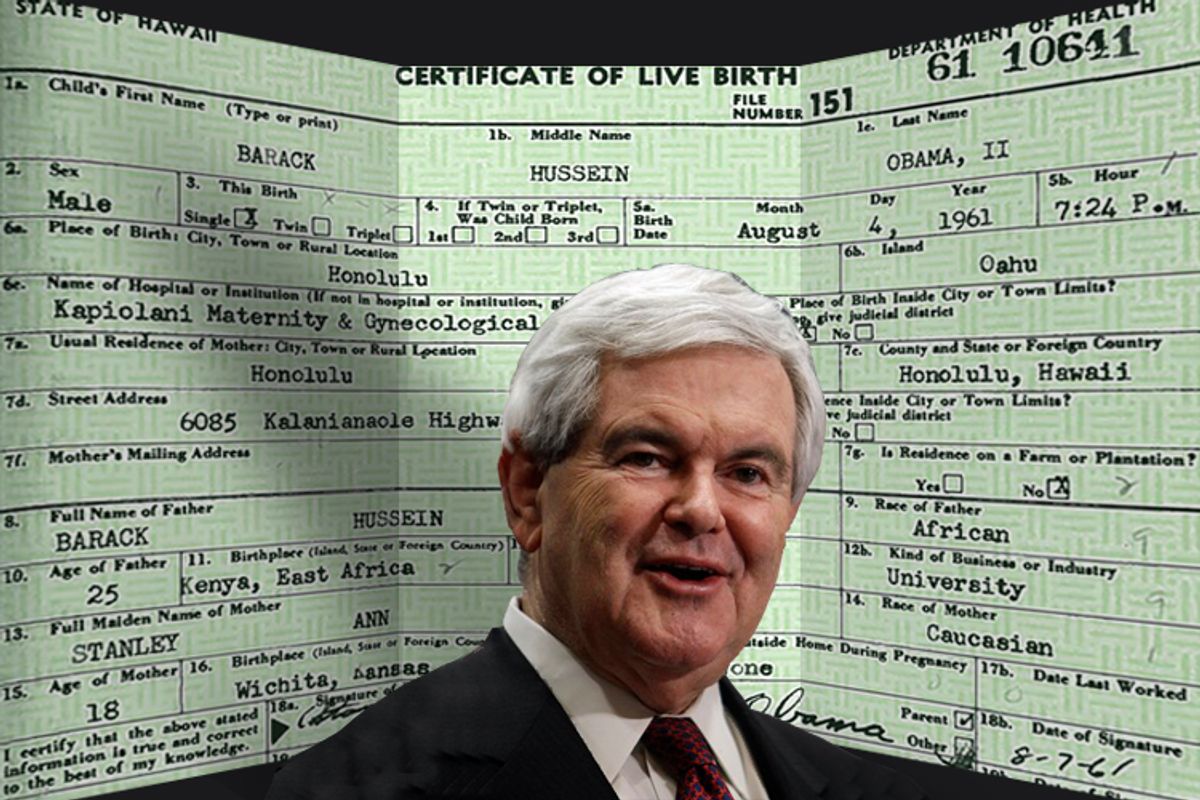 The popular way for "respectable" conservatives to dismiss birtherism without insulting the birthers (who, remember, make up something like 400 percent of the Republican Party, according to various scientific polls) is to call it a "distraction," or darkly insinuate that Democrats might be behind the whole thing. This is traditionally known as "blaming the victim," and it is what right-wingers basically always do when they're not "playing the victim," which they tend to also do a great deal of, these days. (Sarah Palin has mastered doing both simultaneously.)

After the president, in a moment of profound humiliation for the nation as a whole, released a scanned copy of his original, "long-form" birth certificate in order to quiet a preposterous television clown whose ridiculous political ambitions are currently being indulged by a political press that knows exactly how ridiculous the entire game is, Newt Gingrich immediately had the perfect Republican response: "All I would say is, why did it take so long?" Gingrich told Talking Points Memo. "The whole thing is strange."

Yes, why did it take so long? I mean, sure, we already had all the proof we needed that the president was a natural-born citizen, and all that proof did was make birtherism even more prominent, and sure, "releasing" the original document publicly was an actual violation of Hawaiian law requiring a waiver, but what was the big holdup when it came to releasing this completely unnecessary and extraneous document that unhinged trolls have been demanding to see? How strange!

It's almost as if the White House wanted thousands of Americans to be misled about his background by odious, race-baiting hucksters like Trump.

Karl Rove, who knows that "birtherism" is an easy way to marginalize the GOP as crazy, has been hammering this point for some time. Birtherism, in Rove's telling, is a "trap," set by the White House.

“We need the leaders of our party to say, ‘Look, stop falling into the trap of the White House and focus on the real issues,’” he said. Spending time and energy on -- and getting media attention for -- comments about where the president was born is a distraction that discredits the lawmakers and candidates making the remarks, he said.

And what a cunning trap it was. Republicans simply can't help inventing and propagating ludicrous, racially charged fictions about a successful black man! The real guilty party here is the man who irresponsibly got himself elected president with a unique personal background that is somehow threatening to the aging, white residents of an imagined homogenous "Real America"!

Reince Priebus, the new RNC chair, is not as effective at political messaging as Rove. And so in attempting to dismiss birtherism while not offending the birthers, he inadvertently made headlines by implicitly endorsing birtherism. He said that he believed that the president was born in America, but refused to condemn Donald Trump's birtherism. Yesterday, the RNC joined the chorus of Republicans dismissing the entire birth certificate thing as if it was a distraction Obama cooked up himself: "Obama’s release of his birth cert. is a nice, but temporary distraction for him from high gas prices & a terrible economy."

This is an even better conspiracy theory than birtherism, actually. Barack Obama obviously wrote the first rumors about his background, hid his "long-form" birth certificate away, and then paid Philip Berg and Andy Martin to spread the story that the president was foreign-born, all so that one random day in April of 2011 he could "distract" everyone from how expensive gas is.

Positively brilliant. (Though Bill Ayers probably came up with the plan, in between bribing Columbia to admit Obama and writing his first memoir.)