With Mitt Romney still waffling, the first debate of the campaign may end up a sideshow 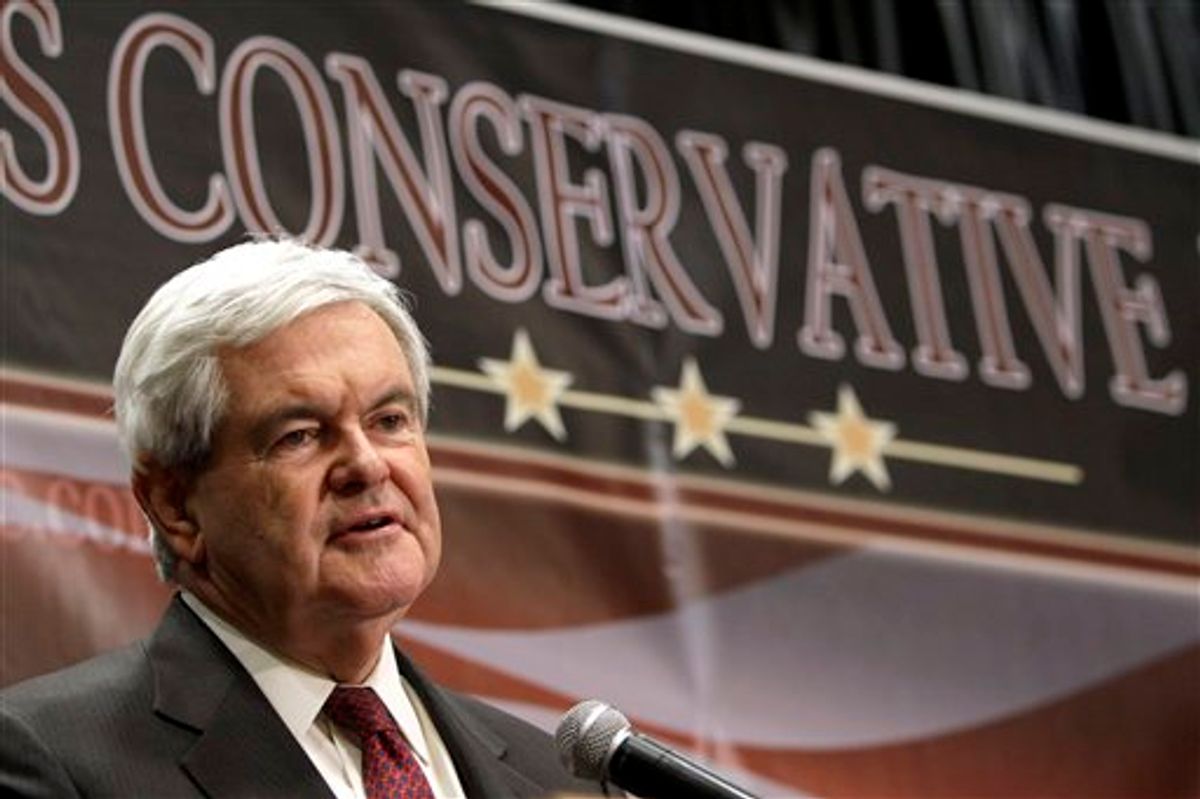 FILE - In this March 26, 2011 file photo, former House Speaker Newt Gingrich speaks in Des Moines, Iowa. Public funding of presidential campaigns, a cornerstone of national politics since the 1970s, may soon go the way of other relics of the ear like long sideburns and lava lamps. Neither President Barack Obama nor any of the leading 2012 Republican contenders is expected to accept federal matching funds and the spending rules they impose. (AP Photo/Charlie Neibergall, File) (AP)
--

We're mere days from the very first presidential debate of the 2012 campaign. It is sponsored by the South Carolina Republican Party, and it will air, on May 5, on Fox News. And Newt Gingrich can't go!

The first debate was supposed to belong to Politico, but once it became clear that a combination of Sarah Palin-related anxiety, reluctance to disclose financial information, and fat Fox News paychecks was causing every serious and credible 2012 candidate to delay officially entering the race until the last possible moment, Politico decided to postpone it debate until the fall rather than waste a lovely spring day asking Herman Cain questions for an hour.

Fox, though, figured it would be fine. It even kicked some candidates off the payroll in order to coerce them into the race. A few weeks ago, it confirmed that Newt Gingrich, Ron Paul, Tim Pawlenty, Rick Santorum and Buddy Roemer would attend. That's like two and a half semi-credible candidates!

There's a problem, though. Newt Gingrich may not actually qualify to participate. He still hasn't launched an exploratory committee, because he still refuses to disclose any information about his shady finances. (Enriching himself is one of the primary reasons Newt Gingrich constantly pretends to run for president.)

Tyler explained that Gingrich has "business entanglements'' and "contractual obligations'' that legally prevent him from immediately creating an exploratory campaign. He added that Republicans shouldn't see Gingrich's absence as a sign that he is leaning against a presidential bid.

Haley Barbour's not running, Mitch Daniels still hasn't decided, and Mike Huckabee seems unlikely to give up his dream job as talk show host. Mitt Romney won't commit to attending. So we're down to a bunch of people who'll never in a million years win the GOP nomination for president and maybe one person who in a million years might win the GOP nomination for president.

Even Michele Bachmann, who lives to be on television, hasn't confirmed either, for some reason. That might be sadder than it is funny.