Here in California I am often reminded of the lesson all parents have to learn: You can never really be safe 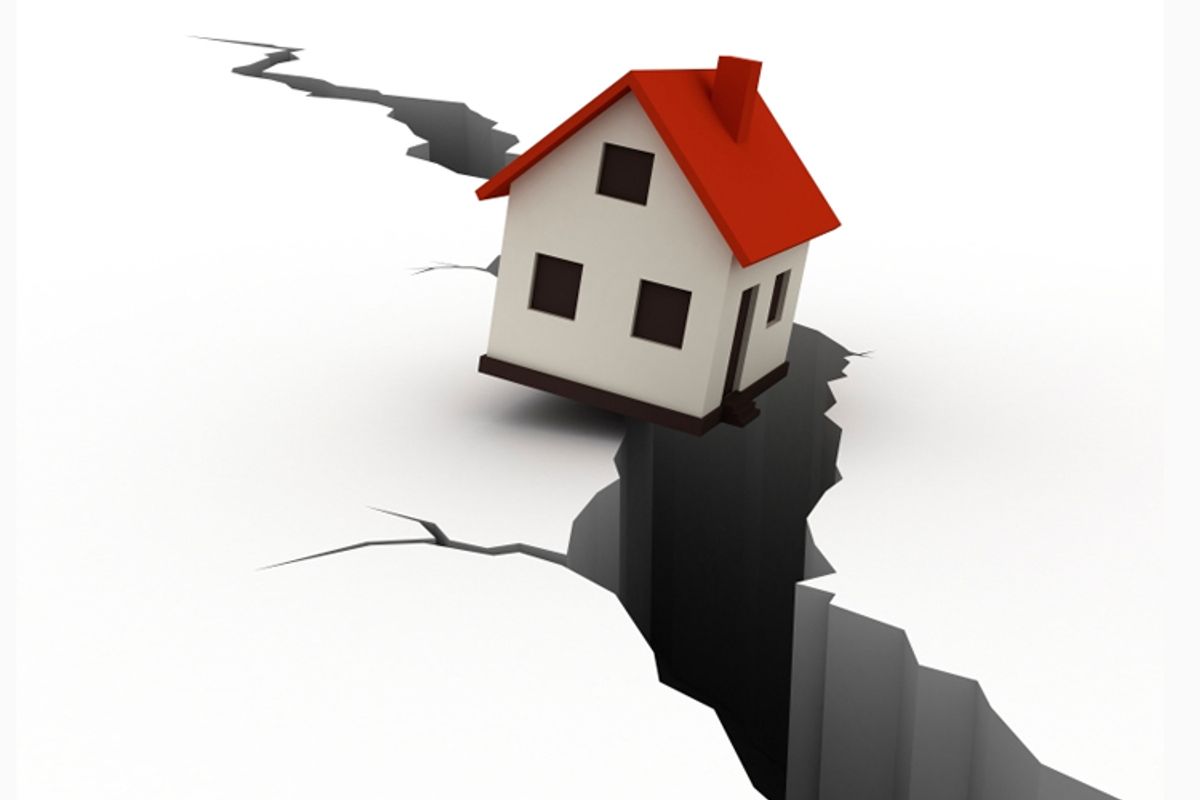 I registered the sound before I felt it, a sense that bypassed my ears and telegraphed across my skin. I listened optimistically for the N-Judah streetcar that rumbles our house on its runs, but I also saw the light fixture swaying in the next room.

Sound, then sight, and finally feeling. I didn't let myself think "earthquake" until I felt the couch shrug beneath me. I caught my husband Tony's eye, but neither of us spoke, and before we'd finished absorbing the event it was gone, like a gust of wind that blows open a door but doesn't ruffle the newspaper.

Tony logged on to the U.S. Geological Survey website to register our zip code on the "Did You Feel It?" page. My parents, in town for a visit, began to reminisce about earthquakes they'd experienced while living in Tokyo. I listened for my young boys, sleeping upstairs. But I decided against walking up to check on them.

I drank a sip of wine and returned to my book.

It's not that we're all so blasé, really, but we're parents. It was going to take more than the earth's evening stretch to get us off the couch.

I realized we were moving into a new territory even before our baby arrived, when we began acquiring baby gear. All of it came with multi-page directions, complete with graphic illustrations and vivid red warnings. Over and over, as we set up the car seat, the highchair, the crib, we read the same grim caution: If we didn't install X correctly, the baby would strangle itself and die. Eventually it became a dark joke, a line we'd quote to each other as we prepared dinner, bought movie tickets, made a grocery list. "Did you pick up batteries?" I'd ask Tony, "If you don't, you know ..." And he'd laugh, "I know, I know, the baby will strangle itself and die."

We were whistling past graveyards.

Once there was an actual baby -- Ben -- not just a line drawing of a floppy body dangling from an errant strap, the joke wasn't so funny. In the night, when I walked laps around the house with my wakeful child, I made sure my bathrobe tie was tucked safely into my pockets so that I wouldn't trip and inadvertently fling him from my arms. If I stumbled when I carried him sleepily downstairs at dawn, the horror movie immediately unspooled in my mind: the terrible fall, the frightening silence of an injured baby who doesn't cry, the 911 call and paramedics bursting in the door. But then, safely down the stairs, I'd push the nightmare out of my head and make myself some oatmeal.

The first literal shaker came when Ben was still tiny enough to sleep in a bassinet at the foot of our bed. A tall, skinny bookshelf leaned against the opposite wall, stacked with unsteady piles of my grad school reading. He didn't wake that night when the floorboards groaned and rocked his cradle, but I climbed out of bed and moved all the books off the shelves, tiptoeing as I made short paperback pedestals on the floor. In the morning, we moved his bed, and anchored all the bookshelves to the walls with screws and straps. Underneath the bed, where people living in other countries store their suitcases and out-of-season sweaters, I keep sneakers tied by their laces to the bedpost, in case a nighttime roller cracks the windows and we have to leave the room over a field of broken glass. I didn't need to include shoes for the baby; I'd scoop him up and carry him out of the house in my arms.

We flew back east for Ben's first Christmas, a family gathering at my parents' home at the end of a dirt road, deep in the Connecticut woods. Ben had a stuffy nose that turned quickly worse after the plane trip, and by Christmas Eve morning, having sat up all night with our feverish boy watching snow flurries threaten to cut us off from the world, Tony and I headed to the hospital. We (all of us) endured the awful diagnostic tests: x-rays, blood work, a catheter snaked up his nose and down. All of the medical equipment was too big for our 9-month-old, and we had to wait as the staff first searched for pediatric versions, and then just cut down adult-sized bandages and dressings. Ben screamed himself hoarse while Tony and I held him down, weeping. Afterward, in the quiet of our hospital room, the pneumonia diagnosis confirmed and our hospital stay indefinite, Ben nursed sadly, eyes closed, worn out from his hard morning; he looked smaller to me, a deflated balloon.

I hated the hospital, Ben's metal cage of a crib, the constant interruptions and paradoxical feelings of isolation. But I felt safe. Nothing could get us there: after all, our kid was already sick. It was after Ben recovered and we went back home that I felt like I was once again on shaky ground. We'd skated so close to tragedy, what would get us next?

People talk about the "seismic shift" in their lives once they become parents, but rarely stop to consider the metaphor. Loving a child means living full-time on a fault line. Once I realized that my earthquakes could be both literal and figurative, it was enough for me to make a plan, gather some supplies, and carry on. This is where I dwell, yes, but I won't dwell on it. I packed some backpacks with food and supplies ranging from windbreakers to water bottles; we carry one in each car and keep two in the garage. We try to remember to update the the boys' spare clothing as they grow steadily bigger.

We were going along pretty well, nothing registering terribly high on the parental Richter scale, just the typical small tremors occasionally rolling through. Horsing around with Ben one day, I dislocated his elbow, and for weeks I felt tentative even grabbing his hand to cross the street. A long, painful bout of pinkeye swelled his eye shut and I had to restrain him, kicking and screaming, while I administered drops. The arrival of our second son, born in temporary housing while we renovated our home, was a bigger tremor; he was easygoing and smiling, but I was thrown off balance. Despite nightly walks in the solid hills above our house, breathing in the summer's jasmine and roses with my new baby strapped to my chest, the air seemed to choke and constrict me. I came down with strep throat three times in as many months.

It wasn't until we moved back home that I regained my equilibrium. Renovating let us brace the house more firmly to the foundation; now, we hope, it will sway with the earth's movements, not shatter. It's what I try to do as a parent, too, responding to my children's crises, big and little, as they move through the world.

But then one day I was walking Ben into preschool when I heard a car crash behind me, the sickening crunch of metal untwisting from metal, and then the scream of an engine revving. As I glanced back to see if anyone was hurt, I registered the oddly comforting scream of a siren. "Help is on the way," I thought, "Everyone will be OK."

Except the car kept going. Its front end smashed, the windshield a spider web of glass, it raced up the street toward us and then quickly past. It swerved toward a dad walking his son into our preschool; he scooped up his son and ran in the door. Still too far from the entrance, I pushed Ben behind me without a word, then hustled him onto the ramp in front of the school. He skipped up the ramp, oblivious to the danger, while I kept an eye on the car. It strangely -- thankfully -- swerved away from our school and roared up the street, and then u-turned menacingly back toward us as I hurried Ben inside. Later that night, after Ben was in bed, I checked the news and learned that the driver of the car, angry and ill, had hit several people, killing one man.

Something about it felt like a dream to me. It came so close, this earthquake, its epicenter just steps away, but all I felt was a dreadful roar. It took him, not me. Touched that family, not mine. And still I wonder why, when we all walk this same shaky ground, more of us don't tumble down more often.

I updated our emergency contact list, checked the water in the earthquake bags, and tucked in a couple more chocolate bars.

It's never entirely safe, as last night's earthquake reminded me again. Whether the ground moves beneath you or not, once you have children, you're living in earthquake country. I chose to live here, to travel heavy and to lie awake when my kids cough through the night. I'm lucky, I know, my boys so sturdy and young, my house strapped to its foundation. I hope this luck never runs out. But statistics tell me that one day a big temblor will hit, and when it does, I have to trust that everything I've packed into our earthquake packs will be enough to see us through.

Caroline M. Grant is the editor-in-chief of LiteraryMama.com and the co-editor of an anthology, "Mama, PhD: Women Write About Motherhood and Academic Life," published by Rutgers University Press. She writes a regular movie column for Literary Mama and has published essays in a number of other literary journals and anthologies. Her website is carolinemgrant.com