Activists arrested in London ahead of royal wedding

Police raid squats across the city before the big royal wedding 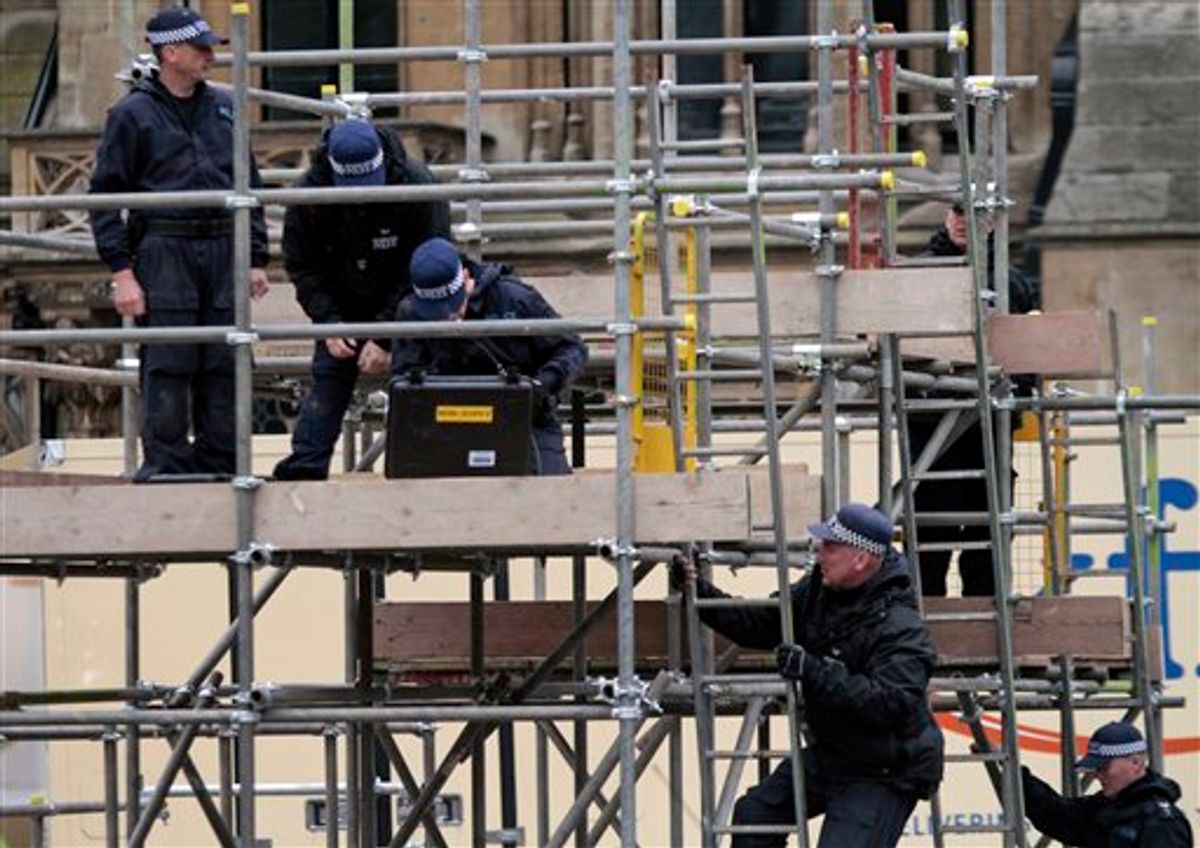 As part of security preparations for the upcoming royal wedding, British police officers use a micro-camera to inspect the inner tubes of a scaffolding reserved for media, outside the Westminster Abbey in central London, Tuesday, April 26, 2011. Britain's Prince William and Kate Middleton will get married on Friday, April 29, 2011. (AP Photo/Lefteris Pitarakis) (AP)
--

Arrests and police raids on squats across London appear to be preemptive strikes against activists before the royal wedding Friday.

The Guardian reported that the police raided five squats across the U.K. capital on Thursday, issuing arrests for petty crimes. But few are convinced that the arrests are not directly connected to Friday’s festivities.

A spokesman denied the raids had anything to do with the royal wedding. Police said the raid at a squat known as Ratstar in Camberwell was carried out under a section 18 warrant to search for stolen goods.

A spokesman said once officers arrived at the address they found that those inside were bypassing the electricity meter and were arrested for "electricity abstraction".

"It's business as usual," a spokesman said. "This is nothing to do with the royal wedding."

As the Guardian notes, senior police officers stated explicitly last week that "they would be taking preemptive action, including raiding squats and making arrests, in advance of the wedding to ensure that no criminal activity took place on the day," which makes apparent that today's arrests have little to do with "electricity abstraction" and more to do with containing unwanted elements in advance of the wedding day.

Thursday's allegedly unconnected arrests come on top of the news, reported earlier this week by the Telegraph, that nearly 70 anarchists have been banned from entering central London on the day of the wedding. (The bans are bail conditions.)

However, no arrests have been made under conspiracy laws, which means that in not one instance have police found sufficient evidence of plots to conduct criminal activity on Friday, which would legally justify (explicitly) preemptive arrests.

Rather, the thinly veiled anticipatory action has taken the form of arrests based on minor past offenses, including alleged involvement in the disorder at recent protests in London.