A history of GOP birther appeasement

Looking back at the Republicans' uncomfortable association with birtherism 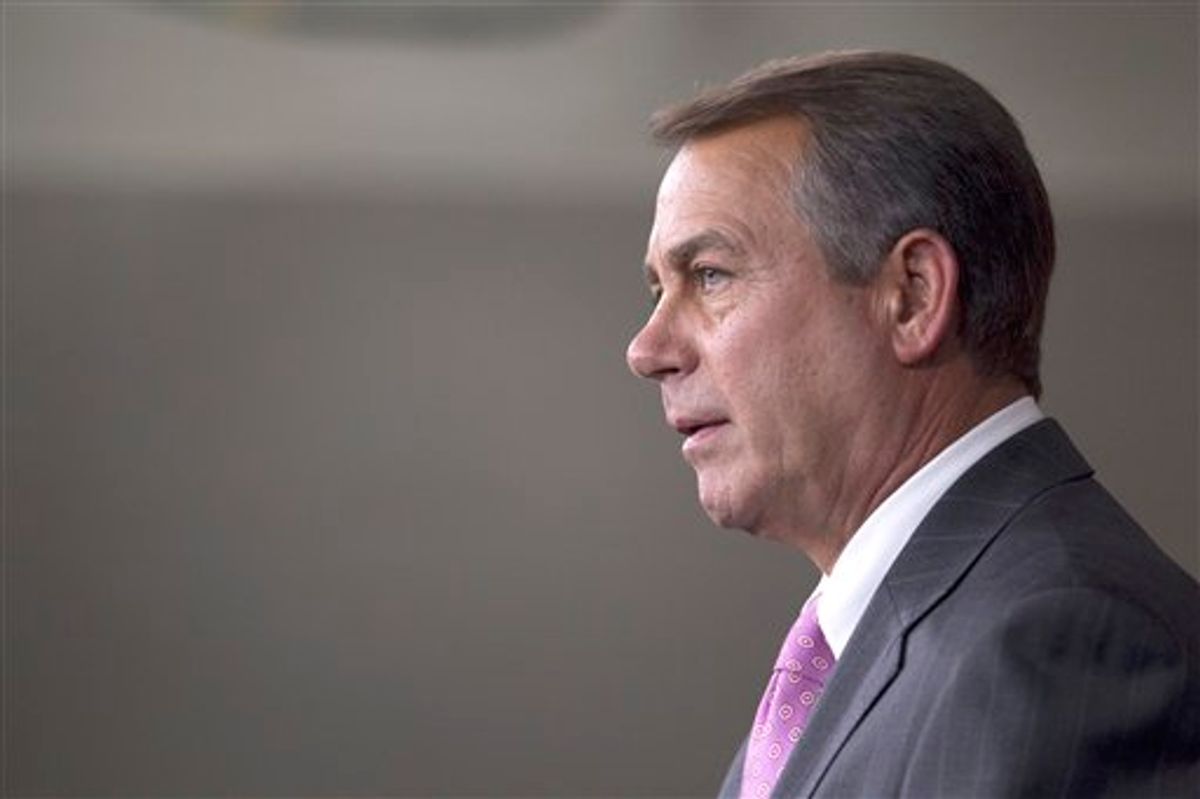 Not only did Trump surge ahead in Republican polls by flaming racial fires -- not only did conservative media outlets from Fox to Drudge to the Breitbart sites indulge the birthers -- but so also did every Republican candidate who said, “I take the president at his word.” Birthers did not doubt the president’s “word.” They were doubting the official records of the state of Hawaii. It’s like answering a 9/11 conspiracist by saying, “I take the 9/11 families at their word that they lost their loved ones.”

The phenomenon Frum identifies of Republican leaders insisting they "take the president at his word" probably died today. There's no rational reason for that -- the short-form birth certificate and all the other evidence that Obama was born in the U.S. were never in substantive doubt. But the release of the long-form anti-Holy Grail should render it impossible for elected Republicans to continue to use the "take him at his word" dodge.

It's worth taking a moment, though, to document the remarkable history of birther appeasement among GOP leaders. The basic rhetorical game was simple: Avoid endorsing an idea that is crazy on its face while not fully repudiating it, thus giving the base a reason to keep believing.

Here's John Boehner in February after being asked about the belief that Obama is Muslim:

GREGORY: As the speaker of the House, as a leader, do you not think it's your responsibility to stand up to that kind of ignorance?

BOEHNER: David, it's not my job to tell the American people what to think. Our job in Washington is to listen to the American people. Having said that, the state of Hawaii has said that he was born there. That's good enough for me. The president says he's a Christian. I accept him at his word.

GREGORY: But isn't that a little bit fast and loose? I mean, you are the leader in Congress and you're not standing up to obvious facts and saying, "These are facts. If you don't believe that, it's nonsense."

Politico reported on this phenomenon way back in 2009. Here is Rep. Pete Hoekstra (R-Mich):

Hoekstra believes there’s no “compelling case” questioning Obama’s origins. But after talking to Rep. Mike Castle about his town hall, he knows that he’d better be ready with an answer.

Rep. John Campbell (R-Calif.), co-sponsor of legislation that would force candidates to show their birth certificates, was widely mocked after he told MSNBC’s Chris Matthews that Obama is a U.S. citizen — “as far as I know.”

"They have a point," he said of the birthers last week. "I don't discourage it. ... But I'm going to pursue defeating [Obama] on things that I think are very destructive to America."

(Inhofe later walked back that statement.)

And here, from January, is an epic exchange between NBC's David Gregory and Rep. Eric Cantor on birtherism:

MR. GREGORY: There are elements of this country who question the president's citizenship, who think that it -- his birth certificate is inauthentic. Will you call that what it is, which is crazy talk?

REP. CANTOR: David, you know, I mean, a lot of that has been an, an issue sort of generated by not only the media, but others in the country. Most Americans really are beyond that, and they want us to focus ...

MR. GREGORY: Right. Is somebody that brings that up just engaging in crazy talk?

MR. GREGORY: All right. Is it a legitimate or an illegitimate issue?

MR. GREGORY: All right. His citizenship should never be questioned, in your judgment. Is that what you're saying?

REP. CANTOR: It is, it is not an issue that even needs to be on the policy-making table right now whatsoever.

MR. GREGORY: Right. Because it's illegitimate? I mean, why won't you just call it what it is?

MR. GREGORY: I mean, I feel like there's a lot of Republican leaders who don't want to go as far as to criticize those folks.

REP. CANTOR: No. I think the president's a citizen of the United States.

REP. CANTOR: So what -- yes. Why, why is it that you want me to go and engage in name-calling?

REP. CANTOR: I think he's a citizen of the United States.

I'd be surprised if this sort of rhetoric continues -- but if you see it crop again, do send me an email.

(With research assistance from Teresa Cotsirilos)