Can the beloved William save the monarchy?

Or will the Firm's attempts to modernize rob the royal family of their magic? 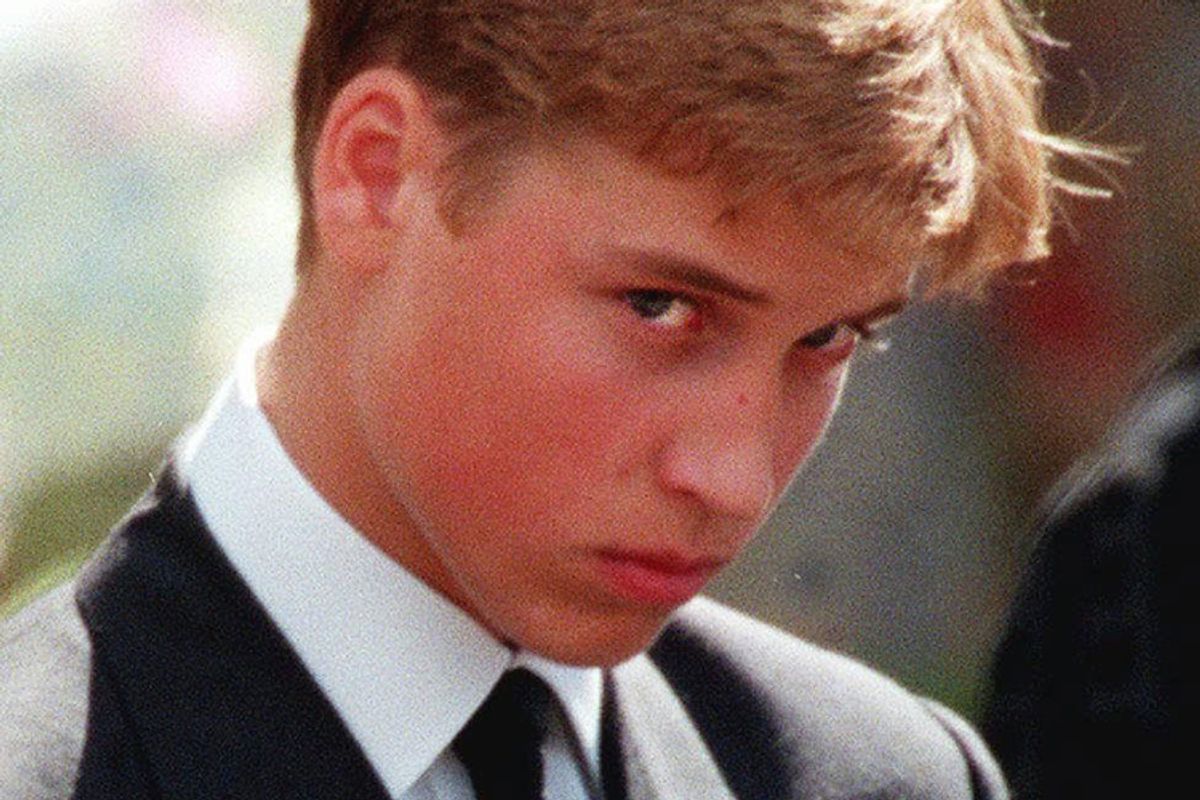 Prince William at the funeral of his mother, Diana, Princess of Wales.
--

Political journalists in Britain have been poring over the memoirs of Tony Blair and his most trusted lieutenants in recent days in an attempt to discover why the ex-prime minister hasn't been invited to the royal wedding. This looks awfully like a snub, particularly as his two Conservative predecessors -- Margaret Thatcher and John Major -- are both on the list. The official explanation is that Thatcher and Major are members of the Royal Order of the Garter while Blair is not. But no one believes it of course.

The diaries of Alastair Campbell, Blair's press secretary, may contain a clue. In the section dealing with the death of Princess Diana he notes how well the prime minister went down on the BBC News after hailing her as the "People's Princess." "It was a very powerful piece of communication," he says. "The People's Princess was easily the strongest line, and the people in the studio afterwards were clearly impressed and felt he had really caught the mood." Campbell used to be credited with coining that line, but one of the revelations in his diaries is that Blair came up with it himself.

It's a safe bet that the line didn't go down well with the Firm, as the royal family likes to refer to itself. Within days, the public mood turned ugly. Why wasn't the Union flag outside Buckingham Palace flying at half-mast? Why were the Windsors remaining in Scotland and not returning to London? The public, fueled by the tabloids, felt that their beloved princess was being disrespected by her former in-laws.

Diana had been engaged in a protracted P.R. war with the Firm in the years before her death and, seen through this prism, Blair's description of her as the "People's Princess" was unhelpful. In the eyes of the royal family, he had helped whip up public hostility towards them. If she was the "People's Princess," that must mean they were aloof and out of touch.

In his diaries, Campbell records the efforts Blair made to heal this rift, persuading the queen to come back to London ahead of the funeral, to mingle with the crowds on the day of her return and to lower the Union Jack to half-mast. These behind-the-scenes machinations are recorded in "The Queen" (2006), the Oscar-winning film in which Blair is cast as the savior of the royal family. It's safe to assume that this, too, went down badly with the Firm. It's clear from Campbell's diaries that the royals and their advisers were out of their depth during the days that followed Diana's death and, afterwards, they probably felt they'd been manipulated by a master politician. Blair's approval ratings shot up in the wake of the funeral, while the Firm seemed badly wounded, its future shrouded in doubt.

Fast forward 14 years, and the royal family has returned to its position at the center of Britain's national life. Over 5,000 street parties are being planned to coincide with the wedding on Friday and, according to a recent poll in the Guardian, 47 percent of Britons say they're going to watch it on television.

The recovery of the Firm may owe something to Tony Blair's chief bit of advice in 1997, which was that the royals needed to "modernize" if they were to retain the affection of the British people -- and "modernize" they did. After Diana's wedding to Charles in 1981, the couple left London on the Royal Train and spent their honeymoon on the Royal Yacht. The yacht has now been decommissioned and the train mothballed. Lesser royals, such as Princess Michael of Kent, have been sidelined, making the Firm appear smaller and more modest. Press attention has been focused on William and Harry, who seem much more at ease in the spotlight than their father. The Windsors today appear less anachronistic -- more in step with contemporary Britain -- than they did 14 years ago.

This, too, may be a reason why Blair hasn't been invited to the wedding. The Firm has heeded the message, but shot the messenger. Among the family and its advisers there's a great deal of debate about just how modern the royals need to be in order to ensure their survival. Refuse to change and they risk seeming reactionary and antediluvian, but if they bend with each passing fashion, there's a danger the magic will be destroyed. The paradox at the heart of the family's popularity is that the royals are both ordinary and extraordinary -- relatable, but different. In the 19th century, the institution of monarchy redefined itself as a family rather than a single individual, and this helped account for its soaring popularity under Queen Victoria. "A family on the throne is an interesting idea, also," wrote Walter Bagehot in "The English Constitution" (1867). "It brings down the pride of sovereignty to the level of petty life."

But for the charm to work, the family has to be like our own and, at the same time, not like our own. Prince William's choice of a commoner as a bride has been a big talking point in the British media, with most members of the chattering classes expressing approval. It's held up as an example of how "modern" he is, less snobbish than his forebears. Yet this ignores the fact that Kate Middleton is firmly upper-middle class -- virtually indistinguishable from the more "suitable" girls William might have chosen instead.

This is the trick the royal family must pull off -- it needs to give the impression of "modernizing" while not really doing so, at least not much. It's as if the public needs an excuse to give vent to a distinctly premodern feeling, a communion with something ancient and mysterious. As a psychoanalyst might put it, the British people need to give themselves permission before they open the floodgates of irrationality. The British political scientist Harold Laski had it right when he compared the worship of the royal family in the 1930s to religious ecstasy: "Eulogy of its habits has reached a level of intensity more comparable with the religious ecstasy of the seventeenth century, when men could still believe in the divine right of kings, than of the scientific temper of the twentieth, which has seen three great imperial houses broken, and the King of Spain transformed into a homeless wanderer."

It is not William's choice of bride that accounts for the public's enthusiasm about the wedding but William himself. Since the cult of monarchy was first established, the most popular members of the family have been those nursing some sort of wound. Queen Victoria, the granddaughter of George III, had the advantage of being widowed at the age of 42 and went on to reign for another 40 years, much of the time dressed in black. George VI, as we saw in "The King's Speech" (2010), suffered from a bad stammer, making him more popular than his polished elder brother. Similarly, Prince William has had to cope with the loss of his mother from the age of 15. The British public took him to their bosom on that fateful day in August 1997, and he has remained there ever since.

One of the questions people were asked in the Guardian poll was whether the crown should pass directly to William, bypassing Charles altogether; 46 percent said yes, compared to 40 percent who said no. Yet this would surely be a "modernization" too far. The concept of a hereditary monarchy ceases to have much meaning if the public can cherry-pick the next sovereign from among the members of the family. Nick Clegg, the deputy prime minister, has called for the rules of succession to be changed, dispensing with primogeniture. That way, William and Kate's firstborn can become the monarch, regardless of whether it's a boy or a girl. But that, too, is unlikely to gain much traction. It has the whiff of a meaningless political gesture. As Sathnam Sanghera, a columnist on the London Times, put it: "The poor may be excluded from the Establishment for a generation, and the under-privileged may have no way of lifting themselves out of their under-privilege for decades, but at least the unborn offspring of Britain's most pampered couple will come into this world knowing that its sex will not prevent it becoming unelected Head of State. Thanks, Nick!"

The most common complaint against the monarchy is that it encourages the general public to accept the hierarchical nature of British society -- it is the glue that holds the class system together. "The English Monarchy strengthens our government with the strength of religion," wrote Bagehot. "It gives now a vast strength to the entire constitution, by enlisting on its behalf the credulous obedience of enormous masses."

That seems like a good republican argument, yet as Bagehot pointed out, a society in which people transferred that mystical allegiance to elected leaders wouldn't necessarily be preferable. The best defense of the monarchy is also the best defense of celebrity culture: The ecstatic worship of popular icons who lack political power acts as a safety valve in democratic societies, diverting irrational feelings that might become dangerous if they were attached to political figures. Better that a cult of personality should grow up around a neutered constitutional monarch like George VI than around a figure like Oswald Mosley, the 1930s leader of the British Union of Fascists. Or, as we like to say in Britain, the best argument against republicanism can be summed up in two words: President Blair.

To outsiders, our love of the royal family can seem slightly pathetic, as though we're hankering to return to the days of Empire. But it's important not to forget the pleasure the Firm brings to millions, particularly at moments such as this. My late father, Michael Young, was a sociologist and, along with his colleague Edward Shils, wrote an account of the queen's coronation in 1953 for the Sociological Review. They noted that the coronation was on occasion much like the Blitz in which people normally separated by class came together in a spirit of national unity. "On this occasion one family was knit together with another in one great national family through identification with the monarchy," they wrote. "A general warmth and congeniality permeated relations even with strangers."

I'm intending to go down to the Mall on Friday and watch as the carriage carrying the royal bride glides past. No doubt I'll feel slightly awkward at first -- self-conscious, ironic, out of place. But I suspect that those feelings will inevitably fade and be replaced by a surge of patriotism. My father and his colleague concluded that the coronation was "a great act of national communion" in which "practically the entire society" made contact with "the sacred." This Friday, the people of Britain will make contact with their own peculiar deity once again.

Toby Young is the author of "How to Lose Friends & Alienate People" and "The Sound of No Hands Clapping." He is currently in the process of setting up a charter school in West London.