Is the U.S. about to defund the Palestinians? 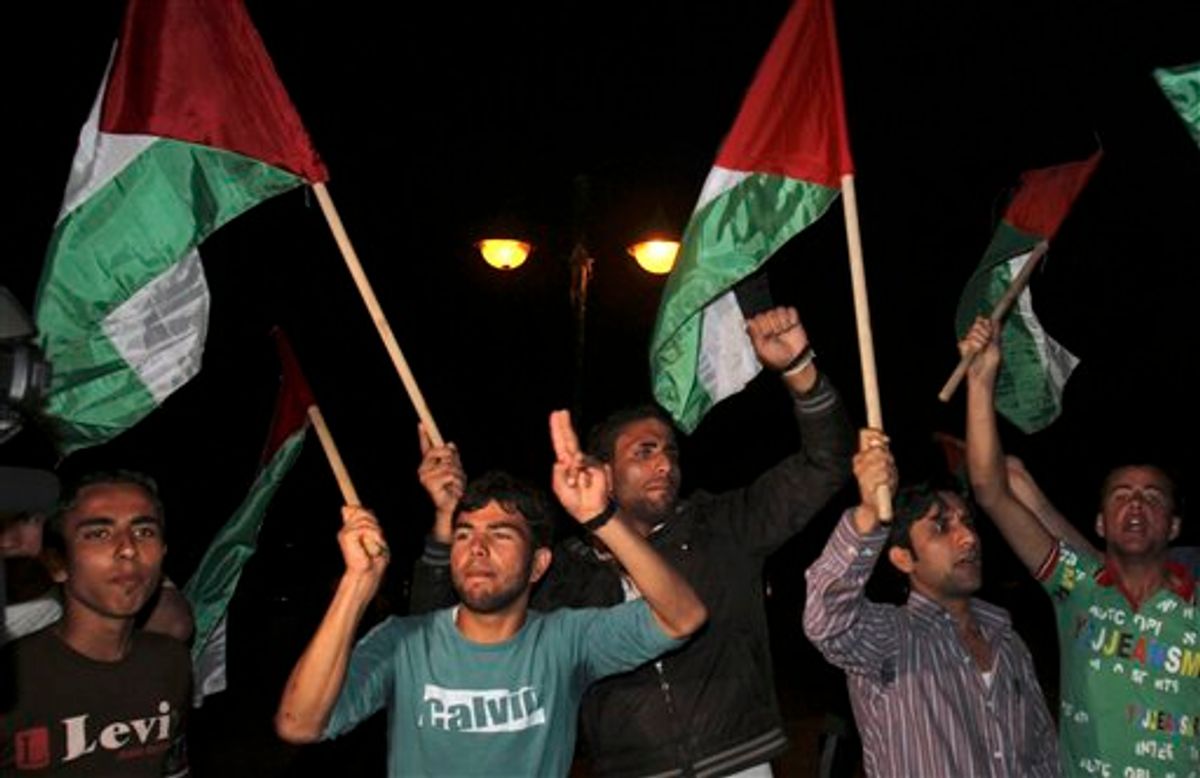 Palestinians wave flags and chant slogans in support of a reconciliation between the rival Fatah and Hamas movements, in Gaza City, Wednesday, April 27, 2011. Palestinians have reached initial agreement on reuniting their rival governments in the West Bank and Gaza, officials from both sides said Wednesday, a step that would remove a main obstacle in the way of peace efforts with Israel. (AP Photo/Adel Hana) (AP)
--

On the heels of the announcement that Hamas and Fatah, the two main Palestinian factions, had reached a reconciliation deal Wednesday, the U.S. is reconsidering its financial aid to the Palestinian Authority.

According to existing U.S. law, such a hybrid government cannot be a recipient of U.S. taxpayer funds because the law stipulates that the PA government must recognize the Jewish state of Israel’s right to exist, among other things. Therefore, in order to implement existing law, the U.S. must end assistance to the Palestinian Authority.

The congresswoman's sentiments were echoed by Rep. Gary Ackerman, D-N.Y., the top Democrat on the House Subcommittee on the Middle East and South Asia and  Rep. Nita Lowey, D-N.Y., the highest-ranking Democrat on the House foreign aid subcommittee, as the Washington Post reports. The White House too reiterated that Hamas is a "terrorist organization."

The Fatah-Hamas reconciliation is about Gaza. In 2007, one year after Hamas first won legislative elections, the Islamist group took full control of the territory, driving out Fatah -- the Western-backed party that controls the West Bank -- in a five-day war (the Israeli blockade soon followed).

An attempted reconciliation, agreed upon in 2008, lasted just two days between the Islamist Hamas and secular Fatah. The newly reached reconciliation will no doubt  succeed only if the groups are willing to share their respective controls of Gaza and the West Bank.

The reliance of the Palestinian Authority on foreign aid should not be underestimated -- around 60 percent of the P.A.’s gross domestic product comes from donations from foreign governments; the U.S. provided the P.A. with $225 million in the 2010 calendar year alone.

More to the point, the U.S.'s reconsideration of its financial support highlights the rock and the hard place between which Palestine continues to be wedged.

Some argue that Palestinian unity, by no means assured in the long term by Wednesday’s reconciliation, is necessary to push Israel to negotiate. As the Economist notes:

If -- and it is still a big if -- a Palestinian unity government does emerge, Hamas is likely to move towards an acceptance of the two-state deal. And Israel, amid a growing sense of isolation in the face of the winds of Arab change, may drastically have to alter its calculations.

Mkhaimar Abusada, a political scientist at Al-Azhar University in Gaza, told the Jerusalem Post, "Israel has so far used Palestinian division as a pretext not to negotiate. Now it has no excuse."

Yet, given that a Palestinian coalition government includes Hamas, it is unity itself that threatens the would-be nation’s international standing.

As the Jerusalem Post emphasizes, Mahmoud Abbas, president of the Fatah-controlled P.A., faces a challenge gaining international approval with a government coalition including Hamas:

Abbas and his prime minster, Salam Fayyad, have been working for the past two years to bring Palestinian institutions up to international standards for good government. This month the UN and the International Monetary Fund both gave the PA a seal of approval. Now with Hamas sharing power, the PA will have a harder case for saying it is meeting the benchmarks.

However, no genuinely unified Palestine could ignore the Hamas faction; it is now Abbas’ challenge to incorporate Hamas in a way that meets the good-government standards.

Stopping aid to the P.A. because of a Fatah-Hamas reconciliation illustrates that the U.S. will not even entertain the possibility of a prerequisite for peace in the region – a unified Palestine. As the Palestinian-American journalist Ali Abuminah opined in the New York Times last August:

No serious analyst believes that peace can be made between Palestinians and Israelis without Hamas on board, any more than could have been the case in Northern Ireland without Sinn Fein and the I.R.A.