Where will the birthers strike next?

President Obama released his long-form, but "birther bills" are still alive in state houses across the country 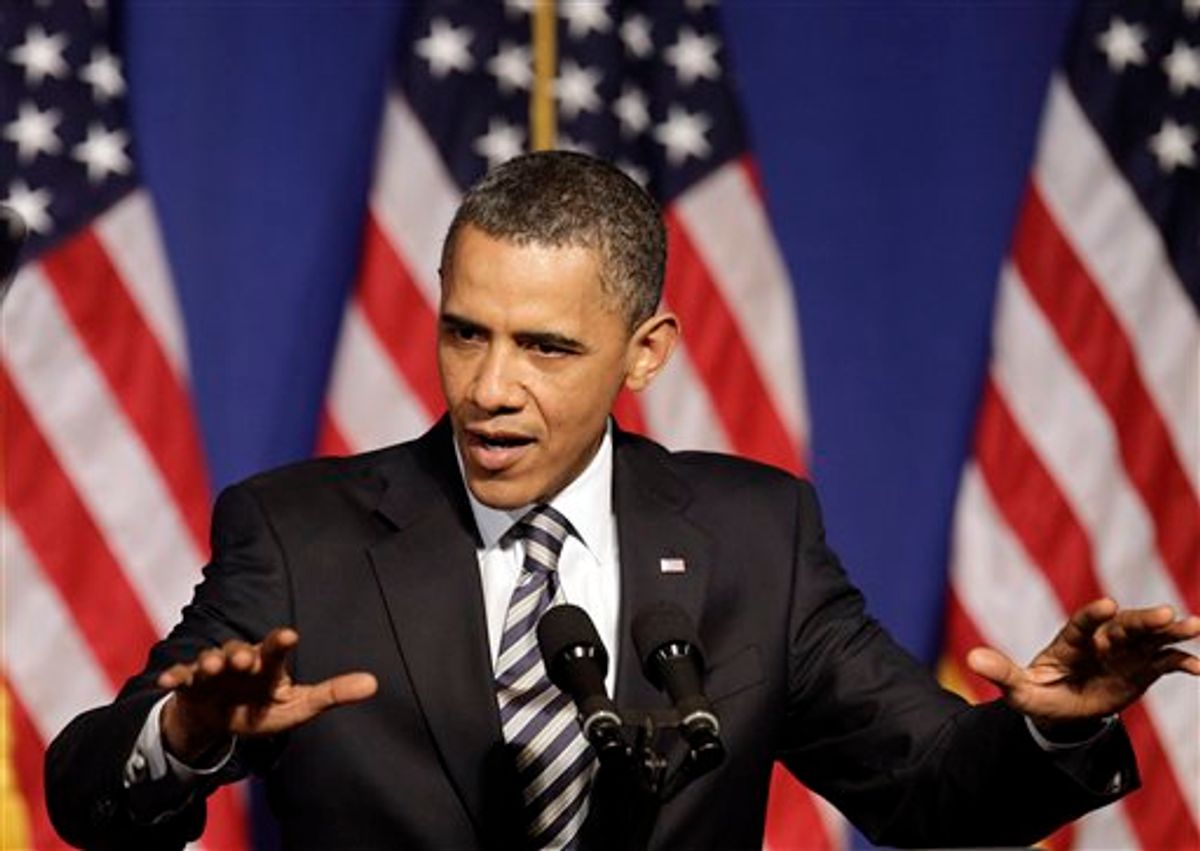 President Barack Obama gestures as he speaks at a Democratic party fundraiser, the third of three such events he attended in one night, in New York, Wednesday, April 27, 2011. (AP Photo/Kathy Willens) (AP)
--

President Obama's disclosure of his long-form birth certificate this week has yet to deter many birthers -- including the ones elected to public office.

Less than 24 hours after the president's press conference on Wednesday, for instance, Oklahoma's House of Representatives passed a bill requiring presidential candidates to provide proof of identity and U.S. citizenship in order to appear on the state's ballot. In all, about a dozen similar bills have been introduced in legislatures across the country. (In Arizona, a birther bill actually passed earlier this month, only to be vetoted by Gov. Jan Brewer.) Some of the proposed laws have some interesting twists -- including one that would declare any voter who cast a ballot for an ineligible candidate guilty of a crime.

Here are a look at the five most notable birther bills that are still pending:

SB 91 requires all candidates running for federal office to submit an "original birth certificate" to the Oklahoma Election Board. It passed the House in a landslide yesterday and will now be sent to the Oklahoma Senate for a procedural vote. The Oklahoma House and Senate both entertain a large Republican majority, and the bill is expected to pass. Oklahoma state legislators assume that Gov. Mary Fallin will sign the bill into law. We emailed Fallin's office asking for a comment and received a reply stating that she has not made any public comment on the issue.

State Rep. Alan Seabaugh and state Sen. A.G. Crowe jointly proposed HB 561 several weeks ago, which also requires candidates to prove U.S. citizenship before appearing on a state ballot. Both lawmakers stated yesterday that they were pleased that Obama had released his long-form birth certificate, but that they would press forward with the bill in an effort to close loopholes in existing Louisiana law. The bill was publicly endorsed by Gov. Bobby Jindal last week. "It's not part of our package," his press secretary said in a statement, "but if the Legislature passes it, we'll sign it."

At first glance, HB 121 appears to be a standard update of Missouri election procedure, but provision 8 of the bill would require presidential and vice-presidential nominees to submit proof of citizenship to Missouri's secretary of state. State Rep. Lyle Rowland, who sponsored the bill, claims that the provision is intended to keep illegal immigrants from taking over the White House, just in case "something were to happen where one of them became popular with the people." According to Rowland's office, the bill has made it out of committee and is scheduled to be debated on the House floor. The specific date has yet to be determined.

Authored by Tea Party favorite Leo Berman last November, HB 295 would require presidential candidates to show their birth certificates to the Texas secretary of state. Unlike his many of his counterparts, Berman is an out and proud birther -- in an interview yesterday, he claimed that he found Obama's long-form birth certificate unconvincing and suspected it may be a hoax. The bill is currently stuck in committee. We contacted Gov. Rick Perry to see if he would support such a bill but did not hear back from his office.

Sponsored by State Rep. Mark Christiansen, LB 654 might be the most radical birther bill in the country. If enacted into law, the bill would not only require presidential and vice-presidential candidates to submit original copies of their long-form birth certificates to Nebraska's secretary of state -- but would also require candidates to prove that their parents obtained U.S. citizenship prior to his or her birth. Nominees would then have to sign a sworn affidavit to that effect and additionally swear that they were not born dual citizens. Nebraskans who vote for a candidate that has not met these criteria would be guilty of a class IV felony. According to Christiansen's office, the bill is currently stuck in committee and will most likely stay there, at least through the end of the year.