When conservatives choose God over science

It's tempting to respond with ridicule, but bite your tongue -- and be ready to admit that we don't know everything 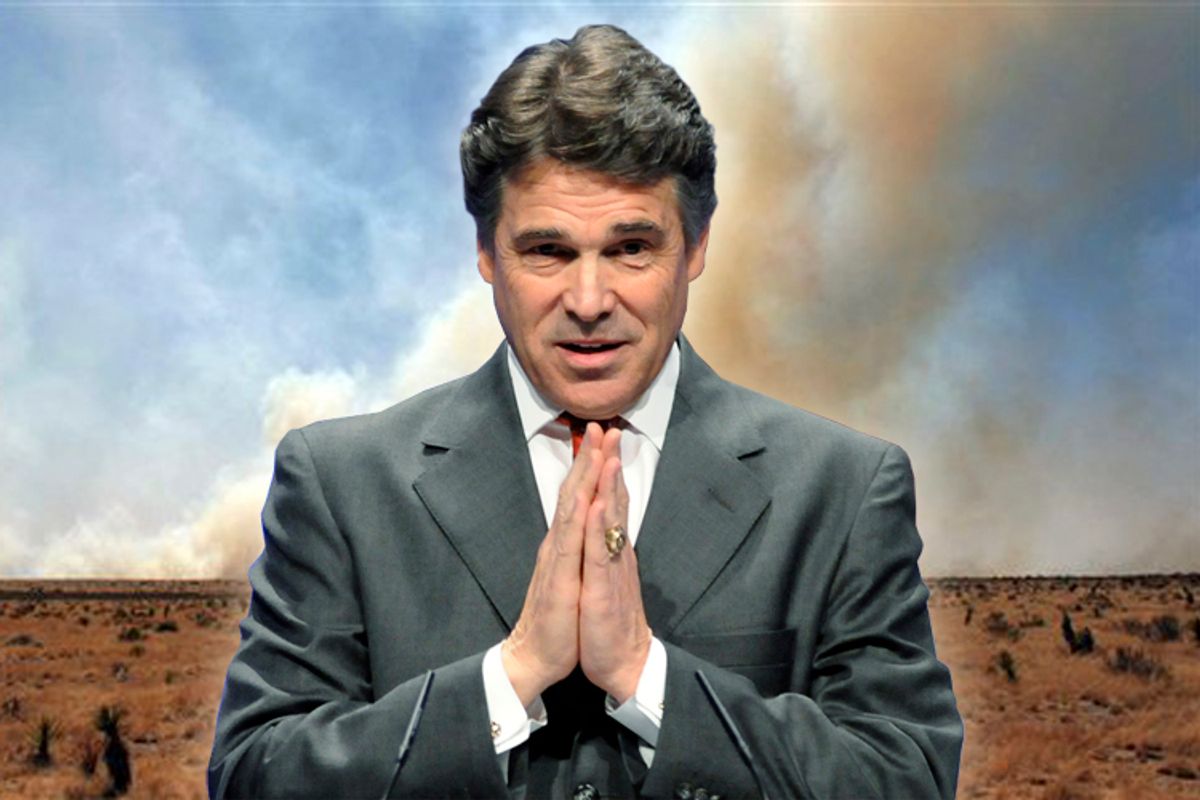 When Texas Gov. Rick Perry officially declared three days last week to be "days of prayer" in response to the wildfires and droughts that have been plaguing the state, many progressives reacted with a mixture of disbelief and ridicule.

Calling for prayer while refusing to recognize the EPA's regulations on greenhouse gases seemed like an act of willful ignorance, as if Texas were sticking its fingers in its ears and humming as loud as it could to drown out what amounts to a warning of a future climate-change-induced catastrophe.

For my part, I'll cop to having sent a disparaging tweet or two. But I shouldn't have. Ridiculing Texas for attempting to pray away drought is a bad idea -- and not just because it makes progressives seem like Al Gore when he sighed with exasperation at George Bush in the 2000 presidential debate. The bigger issue is that, as the effects of climate change become more tangible, weather more unpredictable, and ordinary conditions more disastrous, progressives will have to offer more than sniggers to those who feel threatened by changes they don't understand.

Of course, as those of us who are pro-science argue, the changes are in fact perfectly understandable if you just look at the evidence on climate change. But we know there are lots of reasons why people don’t trust science, from the psychological (we tend to valorize information that confirms our existing beliefs and rationalize away information that doesn’t) to the political (oil companies have a vested interest in marginalizing real climate science and disseminating misinformation). Of course, better science education wouldn’t hurt -- and by "better," I mean education that doesn’t openly flout scientific consensus on evolution and climate change, as Texas education policy now does.

But progressives have to do more than explain why science is right. Too often, we pose a dichotomy between understanding things as "acts of God" that we can't control at all or as the results of scientific processes that we can understand and control completely. And while understanding the various factors -- both natural and social -- that contribute to disasters can help us anticipate them and minimize their worst impacts, we have to be more forthcoming about the limitations of technocratic approaches. We have to do a better job of talking about what science-based policy actually means and, more fundamentally, about how science actually works -- which means acknowledging that we don’t know everything and can’t control everything.

This approach is politically risky. Talking about the role of uncertainty in the scientific process can make scientific explanations vulnerable to people who would prefer to ignore inconvenient truths as long as possible. There are plenty of climate-deniers out there ready to pounce on the slightest hint of uncertainty to declare climate change a fraud. But claiming absolute knowledge may be just as dangerous, as the backlash of distrust spurred by "Climategate" demonstrated; when people got a glimpse of the disagreement and debate that is an essential part of the scientific process, they assumed they'd been hoodwinked all along.

And just as important, we'll make better policy if we admit we don't know and can't control everything while continuing to stand by the things we do know. To admit uncertainty isn’t to undermine science -- rather, it’s essential for making policy that’s science-based. It will help us better assess what we can feasibly do and prepare for the things we can’t. It will make us more flexible, more ready to adapt to new information and perspectives, and ultimately more resilient. Those qualities are particularly important in the age of climate change -- we don’t know what a planet that's 2, or 3, or 6 degrees warmer will be like because we haven’t lived on it yet.

After Katrina, for example, despite the Bush administration's protestations that Katrina had "exceeded … anybody’s foresight," it soon became clear that the risk of a disastrous hurricane had been predicted for years, but because the government neglected its duties to mitigate and to prepare for a disaster to the best of its abilities, deep-rooted social problems turned a moderately sized hurricane into a catastrophe. But overestimating our ability to control nature is also dangerous: The levees protecting New Orleans from the Mississippi River and Lake Pontchartrain were built to resist most storms, but in such a way that a breach would result in catastrophic failure. Acknowledging the inevitability of the unexpected and the potential fallibility of all human systems is essential to building systems that can fail less disastrously.

The problem is that admitting we’re not totally in control is scary. Writing about disaster and injustice, political philosopher Judith Shklar noted that "we often blame ourselves wholly without grounds, simply because an arbitrary and wholly impersonal world seems harder to endure than an unjust one in which some force, at the very least, is in charge of events." But the question of how to accept our inability to completely control the world around us without simply reverting to theological explanations is an important one. And even more important is the question of how can we relinquish the illusion of control without granting a pass to real acts of injustice -- that is, without calling things "acts of God" to excuse our own failures.

More difficult may be accepting a world of uncertainty and seeming randomness, and understanding that what seems random may simply be the effect of living in a universe that doesn’t revolve around us. Doing that without losing sight of the role we do play in creating, exacerbating and perpetuating injustice is perhaps most difficult of all. But it’s worth asking how we might change our approach to living in the world if we learned to accept that bad things sometimes happen to good people neither because God is punishing us nor because we failed to do everything right, but because we live on a planet full of living things and dynamic processes, from honeybees to earthquakes to threshold effects. Might we be humble, more conscious of the other people, creatures and things on which our lives depend?

These are hard questions to answer, but progressives need to start asking them. As Alex de Waal wrote shortly after Katrina, "the public leaders best able to craft a meaningful narrative will be those who shape America’s social and environmental policies and even its leadership over the next few years." Progressives need to craft a narrative that acknowledges our simultaneous responsibility to do what we can to anticipate and mitigate environmental threats and to be humble about what we can’t do, or risk losing the chance for a truly science-based conversation about our relationship to the natural world at the time when it’s needed most.