What a "truce" on social issues actually means in the GOP 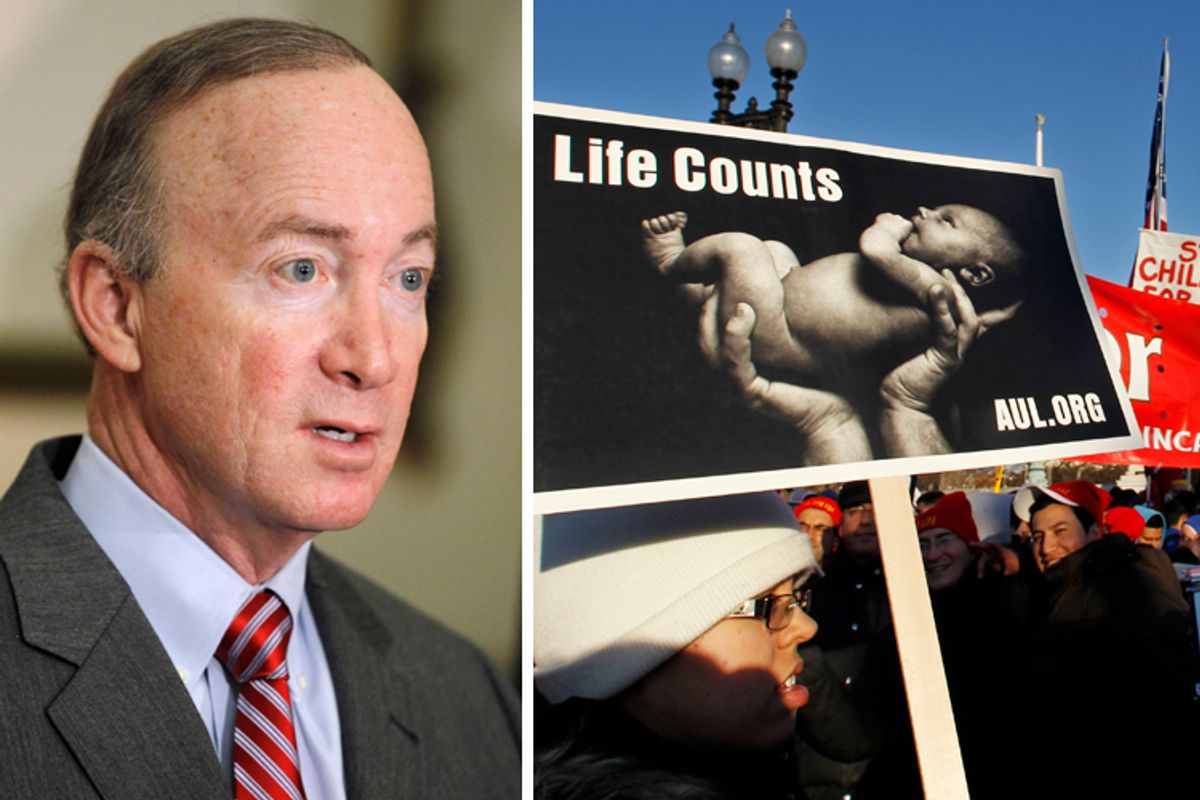 Mitch Daniels, the Indiana governor and potential 2012 presidential candidate, has won considerable attention for arguing that Republicans need to call a "truce" on social issues.

"We’re going to just have to agree to get along for a little while," he told the Weekly Standard's Andrew Ferguson last summer. He made a similar pitch at CPAC in February, arguing that "purity in martyrdom is for suicide bombers" and that "I for one have no interest in standing in the wreckage of our Republic saying, 'I told you so' or, 'You should’ve done it my way.'"

And yet, when the culture war made its way to his gubernatorial desk this week -- in the form of a bill passed by the GOP-controlled state legislature that would make Indiana the first state in the nation to ban any money from Medicaid being used at Planned Parenthood -- Daniels behaved like any right-wing ideologue would: He decided to sign it.

In a statement released Friday afternoon, Daniels insisted that his decision will have no negative impact on low-income women who now rely on Planned Parenthood for family planning services or even their basic healthcare needs.

"Any organization affected by this provision can resume receiving taxpayer dollars immediately by ceasing or separating its operations that perform abortions," he argued.

What this really is, of course, is the clearest sign yet that Daniels is looking to run for president. He's officially undecided, although the recent news that Haley Barbour, his close friend, will not be a candidate has prompted speculation about an imminent Daniels entry. Vetoing this bill would have ended any realistic hope for Daniels -- who would enter the campaign with almost no popular support and would rely on key conservative opinion-shapers and interest group leaders to help make his case to the GOP masses -- to gain traction. By signing it, he won't significantly increase his chances of securing the GOP nomination, but at least he'll remain a viable prospect.

What this moment really illustrates, though, is the hollowness of Daniels' "truce" talk -- and of similar efforts from national GOP leaders to wink at swing voters who may not be comfortable with the fanaticism of the party's base. Daniels, and other GOP leaders like him, may genuinely have more pragmatic instincts than, say, Michele Bachmann, but at the end of the day, his advancement in elected politics is as much tied to keeping the party base happy as hers is. And that base strongly, urgently supports bills like the one that Daniels is about to sign -- something that is as true now as it would be if Daniels were sitting in the White House.