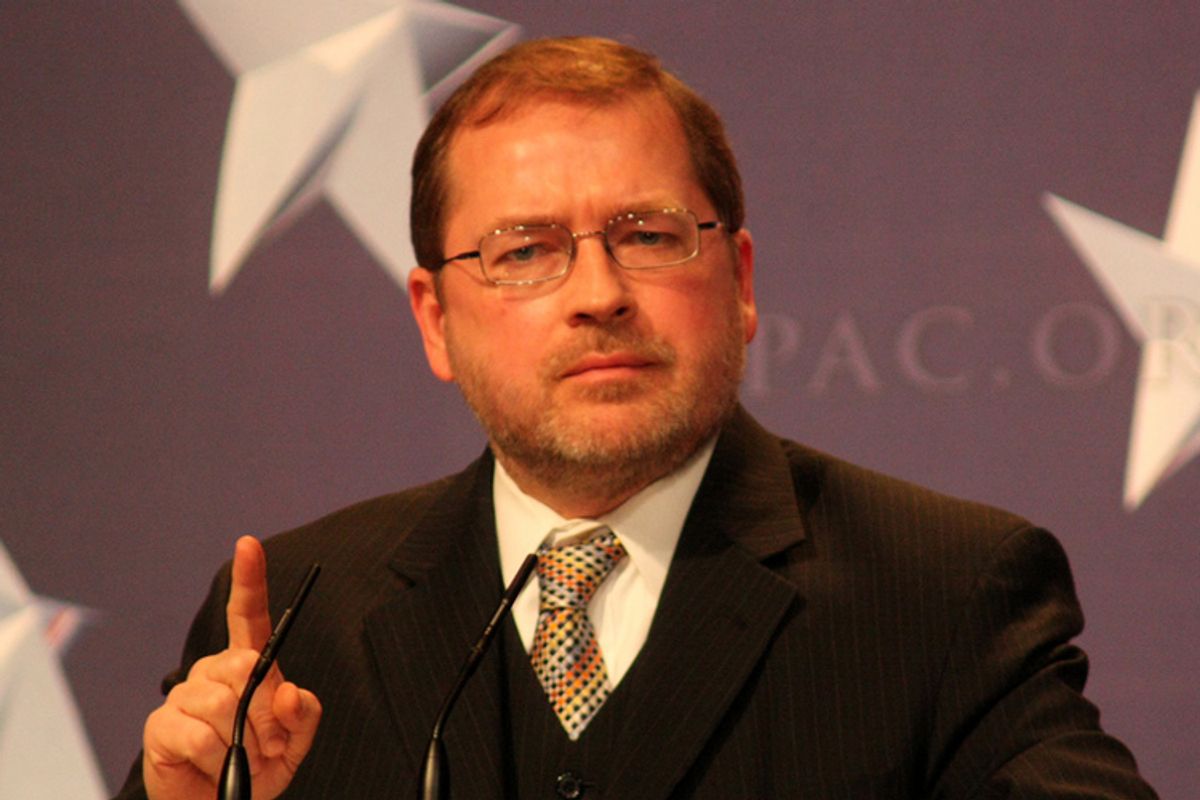 Grover "I want to drown the government in a bathtub" Norquist is pushing House Republicans to back a new debt-ceiling plan, reports Russell Berman at The Hill. Instead of a one-time deal to raise the debt ceiling that might deliver some long-term stability to government finances, Norquist thinks the House GOP should extend the debt limit for two months at a time -- and extort new concessions from Obama at each juncture.

"My argument is, you give them two months at a time, because each time you could get something reasonable," Norquist told The Hill in an interview this week at his downtown offices.

The proposal has gained traction with some members of the conservative Republican Study Committee, who plan to bring it up in "listening sessions" scheduled by party leaders for after the Easter recess.

Somehow, Berman manages to devote 1,000 words to Norquist's latest crusade without finding a single person willing to label it as what it is: the most ridiculous, irresponsible and utterly unlikely to succeed tomfoolery that House Republicans have yet considered as part of the debt-ceiling showdown.

Right now, neither the general public nor financial markets -- as proven by Standard & Poor's downgrade of the U.S. credit outlook two weeks ago -- are the least bit confident that Congress and the White House can work together to address either the nation's ongoing economic woes or the long-term structural problems that drive the deficit. Moreover, the entire political fight over the debt ceiling is, fundamentally, a pathetic joke. Just six months ago, Republicans overwhelmingly supported a package of tax cuts that significantly expanded this year's deficit. Even Paul Ryan's Medicare-privatizing, Medicaid-slashing budget would require raising the debt limit. Just the potential that the U.S. might default on its debt causes nightmares for Wall Street, foreign investors and anyone who might wonder whether their next Social Security check will arrive as promised.

No other country engages in this foolishness -- instituting an arbitrary debt limit and then routinely passing legislation that breaks it. But what the House Republicans are supposedly considering is even more stupid: a platform for permanent debt-ceiling revolution that ensures constant tension and stress about the future of government finances and the U.S.'s commitment to paying its debts.

Of course, this ludicrous notion will go nowhere -- it can be dismissed just as easily as Speaker of the House John Boehner's much-worried-about suggestion last weekend that there might not even be a vote to raise the debt ceiling. This is all just more bluff in a big game of chicken. The strategy worked perfectly during the continuing resolution negotiations, when Boehner did a pretty good job of convincing nearly everyone that a government shutdown was imminent. If your bargaining position starts out at the outright extreme border of conceivability, then even a ridiculous compromise starts to look pretty good.