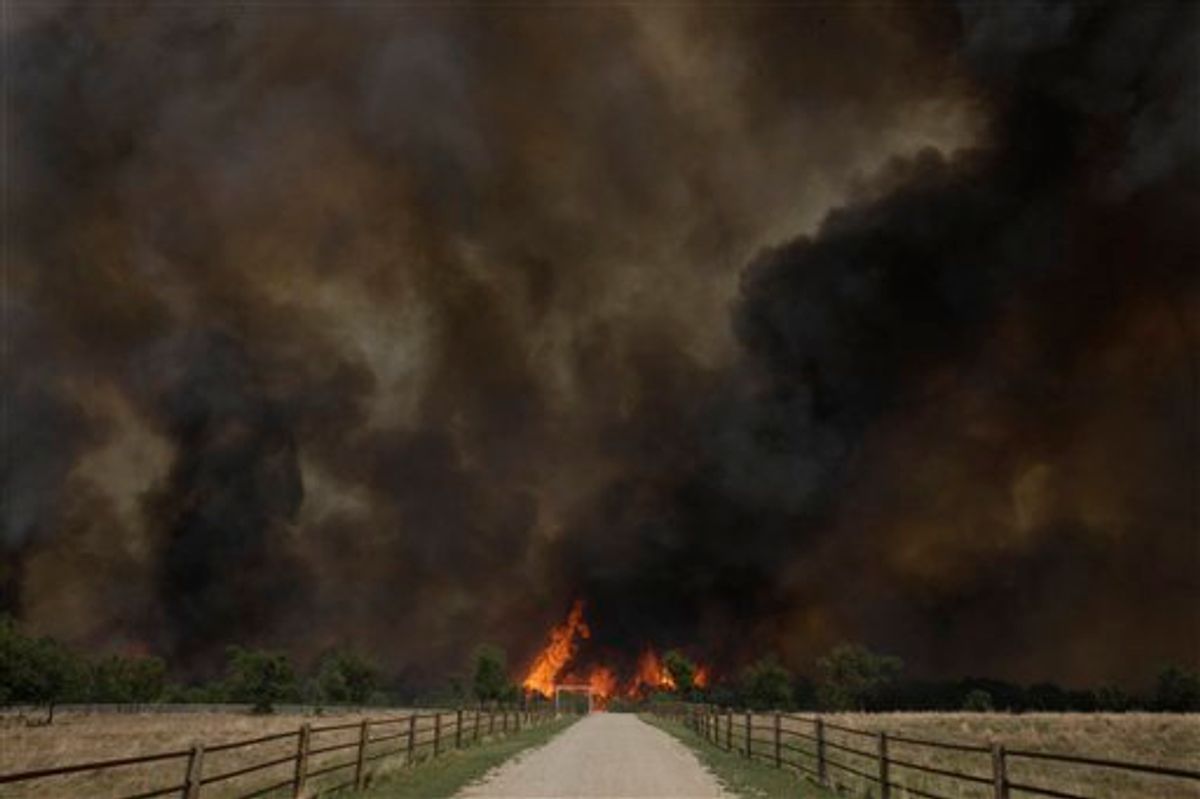 With God apparently unmoved by Texas' official declaration of three days of prayer for rain, Gov. Rick Perry has turned his attention to another awesome potentate -- President Obama.

Specifically, Perry wants Obama to declare a federal state of emergency, which would allow Texas to recoup some 75 percent of the funds it is spending to combat devastating wildfires. But Perry is griping that despite having sent in his application on April 25, Obama still hasn't acted. Meanwhile, tornado-racked Alabama was lavished with immediate state-of-emergency love.

"You have to ask, 'Why are you taking care of Alabama and other states?' I know our letter didn't get lost in the mail," Perry, a Republican and frequent critic of the federal government, said after addressing a Texas emergency management conference.

The Federal Emergency Management Agency has already authorized 20 emergency declarations for individual fires in Texas. But the obvious implication of the "you have to ask" phrasing is that Obama is delaying a statewide declaration as some kind of punishment for Texas, possibly in retaliation for its governor's well-publicized antipathy to the current administration.

That seems unlikely -- although one could understand why the president might be a bit peeved at the governor. A year ago, Perry was rejecting federal stimulus aid that would shore up Texas' unemployment trust fund, and firing up Tea Party audiences with talk of secession. But now, when disaster hits, suddenly he's looking for federal handouts! Somehow, it's OK to ask for aid when fires are burning but not when a financial meltdown has thrown millions of out of work.

Adding a further layer of irony, the Christian Science Monitor reports that "the state legislature, meanwhile, recently proposed slicing $34 million out of the Texas Forest Service's $109 million biennial budget, with most of the cuts coming from training and equipment grants for volunteer crews who deal with wildfires."

And finally, if Obama really was looking to punish states for their recalcitrant rejection of his agenda, wouldn't Alabama be at the top of his list? I can't think of a single senator who has been more obstructive to everything the White House wanted to do over the last two years than Richard Shelby, the ranking Republican on the Senate Banking Committee. Jeff Sessions isn't far behind. Rick Perry has been annoying, but Shelby and Sessions have real power.