In the new straight-to-DVD clunker "Blood Out," the former "Batman" star shows how far he's fallen 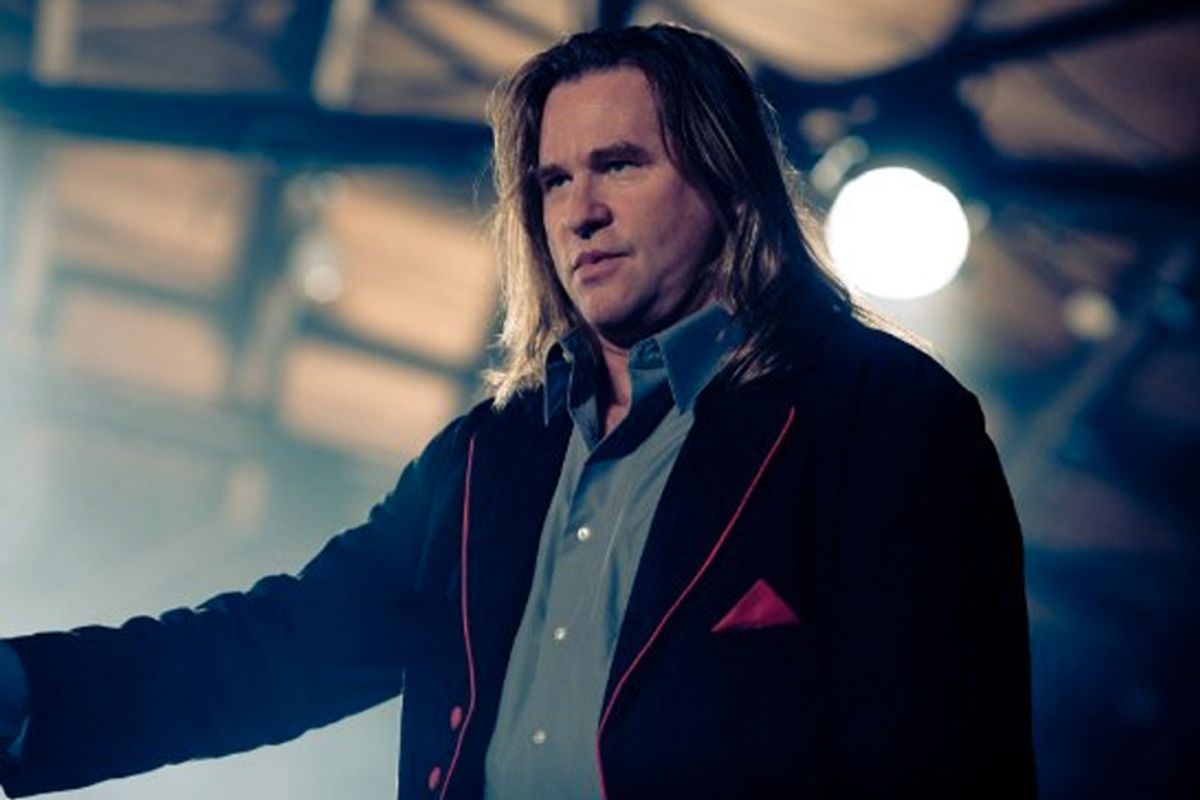 There was a time when Val Kilmer was the Lizard King, and he could do anything. He could dance with dead Indians, take a leak in front of Billy Idol, and try to set Meg Ryan on fire while Oliver Stone could only look on in awe from the director's chair. Val was your huckleberry (whatever that means) as he shot it out with Johnny Ringo on the outskirts of Tombstone and then played a Chopin nocturne for the unappreciative rubes in Wyatt Earp's gambling house. During those days of the early 1990s, Kilmer could spout dialogue laced with nearly incomprehensible poetry in "The Doors" and "Tombstone," and STILL land the lead in a Joel Schumacher Batman movie where he gets to swap spit with Nicole Kidman while wearing a caped crusader outfit with disarmingly pert nipples sculpted into the breastplate.

Today Christian Bale is the one getting his face emblazoned on collectable cups for playing Batman in a less embarrassing rebooted franchise, while Kilmer is mired in purgatory of straight-to-DVD action flicks. But Val still has the poetry, and he unleashes a fusillade of it during the 10 minutes that he shows up to collect a paycheck in "Blood Out," a low-grade shoot-'em-up from executive producer Curtis "50 Cent" Jackson. This time Kilmer is unhindered by the writings of Jim Morrison as he goes all free-flow/stream-of-consciousness like a beat poet who's smoking today's more potent green bud instead of that '50s dirt weed that Allen Ginsberg had to make do with.

During the build-up to the film's climactic mixed martial arts match (it's a Lionsgate movie so it has to have an MMA match), Kilmer's crime boss doesn't merely deliver lines; he speaks in stanzas. "This little scratch of Earth" he says, "swallowed up by the beast/ mere remnants of the skeletons and bones you made it/ Mother Earth's breath is weighted." That look on the faces of straight-to-DVD veterans Vinnie Jones and Tamar Hassan isn't just one of bewilderment; it's the look of two men who realize that they are witnessing history — that Kilmer is having his Brando in "Apocalypse Now" moment and has just stolen the movie from them in record time. Unfortunately, even Kilmer's mad prose cannot make "Blood Out" worth watching even if it's the last movie left in the Redbox at 2 a.m. and you're drunk enough to consider renting it.

50 Cent, who gets top billing in the DVD's box art, clocks in less time as a corrupt cop in "Blood Out" than Kilmer and delivers all of his lines through clenched teeth as if he's just had a deep cleaning at the dentist and the Novocain hasn't worn off yet. 50 and Val also have no scenes together, dashing all hopes that the two would be pitted against each other in a rap-off after the shootouts and pit fights. Now that would be the movie that I want to see. For most of its runtime, "Blood Out" packs all of the intensity of watching a segment of 50 Cent's financial portfolio, kind of like his Twitter penny-stock-fixing scam, only not as likely to land him in the middle of an SEC investigation.

What we're left with is Luke Goss, the steely-eyed Brit who just white-knuckled his way through January's "Death Race" prequel. In "Blood Out," he plays a small-town sheriff's deputy who infiltrates a gang to find out who killed his druggie brother. In order to pass himself off as a street-fighting bad ass, Goss gets lots of badly drawn fake skulls tattooed onto his upper body and beats people up for no reason. Watching Goss do substantially more than go through the motions, I can only hope that somebody gets the rights to produce a straight-to-DVD prequel to "Sexy Beast" (2000) and casts him as the younger version of Ben Kingsley's cockney ball buster. It's the role that Goss was born to play in the medium that he was meant to play it in.