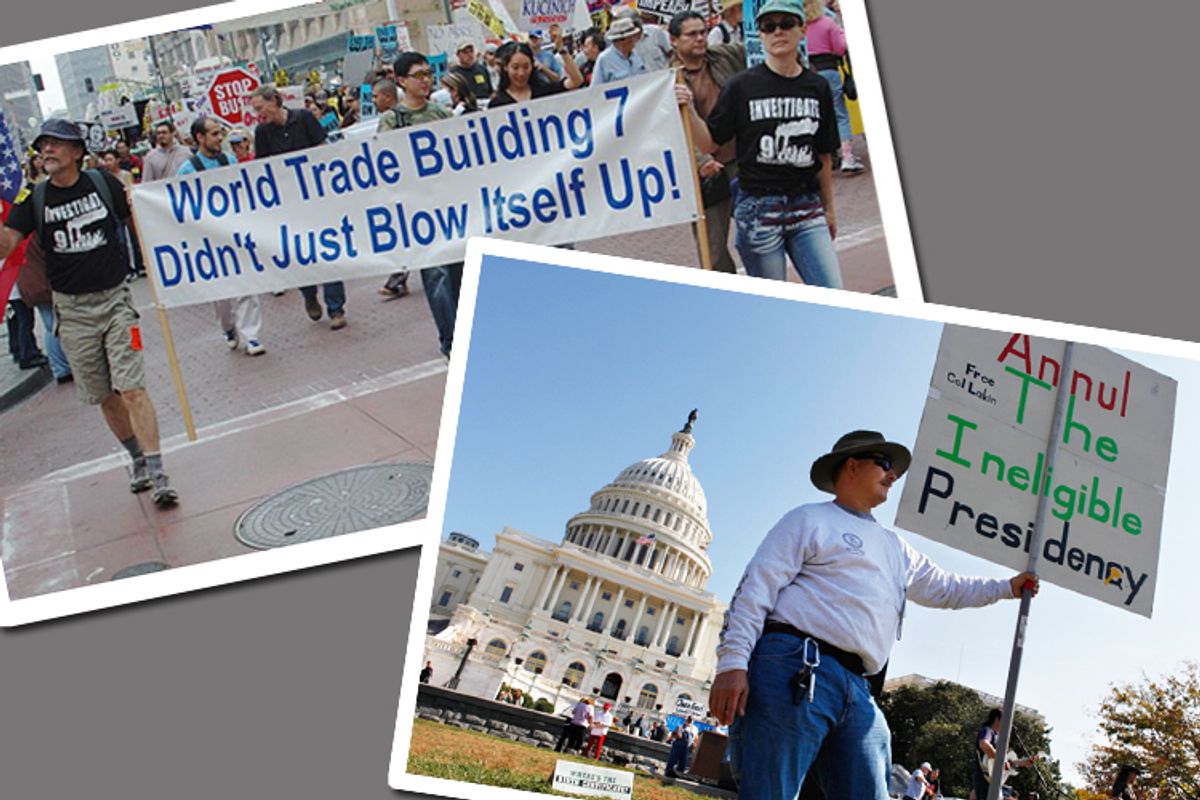 Just hours after President Obama released his long-form birth certificate this week, signs of a schism within the birther community began to emerge.

Some, like birther infomercial creator Bill Keller, declared that the "issue is dead now." But a camp of die-hards, with an assist from the Drudge Report, has seized on the theory that the long-form birth certificate is a forgery.

What explains this split? How do conspiracy theorists typically react to new information? And, with the long sought birth certificate finally released, is birtherism long for this world?

I decided to ask the Canadian journalist Jonathan Kay, who spent two years researching trutherism -- the belief that the official story of what happened on Sept. 11 is a lie, and that the U.S. government had some role in the attacks. Kay's book, "Among the Truthers," is out next month. The following transcript of our conversation has been edited for length and clarity.

With the release of the president's birth certificate this week, how do you expect conspiracy theorists to process this new information?

I think that there's a lot of casual birthers who will now be convinced. A pollster will call on the phone and say, "Do you have suspicions about the citizenship of Barack Obama?" And they'll say, "Yeah, now that you mention it, I do." Those sort of casual conspiracy theorists will probably be convinced. But people who are hardcore conspiracy theorists in the birther realm, people who have made it their all-consuming passion to prove that Obama is not a U.S. citizen -- those people will not be convinced by this. And that is because conspiracism, as I call it, is in psychological terms very similar to a religion or a cult. Once people go down the rabbit hole, it's very, very difficult to get them back up, and you can't really do it with facts. They have invested so much psychological energy in this, they can't just throw up their hands and say, "Oh, I was wrong."

But you actually do think that the release will chip away at casual birtherism?

I think it will definitely chip away at the surveys. It's sort of an inexact science because if someone calls you and says, "Do you believe x?", the mere fact that someone is calling you on the phone to ask suggests that both points of view on the issue are legitimate. So the mere act of taking a survey sometimes causes respondents to embrace the dissident opinion. But now that the birth certificate is out there, most people who followed the issue casually will know: "OK, this is now a discredited opinion. It's the equivalent of thinking the moon landing was a hoax or thinking the world is flat. My neighbors are telling me this has been settled and they're starting to make fun of me for talking about it, so I'm going to move on."

If a pollster looking at birtherism calls a conservative who hates Obama, and the respondent knows that the negative answer is that the president was born abroad, might that dynamic explain some of the poll results? The same phenomenon might have been in play among Democrats in 2007 or 2008 when there were pollsters asking, "Did Bush know about 9/11 in advance?"

There are people who are polarized who will simply choose the most radical answer to any question that aligns with their ideological point of view. In the years immediately after 2003 when the Iraq war began, you could say anything about Bush in the left-wing press, and you'd find people who would say, "Oh yes, that's true. He's a theocrat, he's a fascist, he's a Nazi." Yes, it's terrible what they're saying about Obama, but I think people have short memories and they don't remember how bad the things that were said about Bush were.

I also think it's true that birtherism is a symbolic issue. The belief that Obama was not born in the United States is symbolic of a  gut-level feeling that Obama is somehow an illegitimate American, that his politics are illegitimate, that he's trying to turn the United States into something that is not American, that he's against capitalism, that he's against Christianity, that he hates whites. Some people have swallowed all these points of view. Birtherism is a short-hand for saying, "He's not a real American."

Turning to 9/11, do you think there are legitimate unanswered questions about the event that deserve investigation?

There are certain quiet scandals about 9/11 that have nothing to do with any inside job that haven't been talked about very much. One of the interesting things is the collapse of World Trade Center 7, which fell around 5 p.m. on 9/11 because of a fire. Truthers will tell you it collapsed because of an explosion in the building, and they will show you videos and say the footage proves it was controlled demolition. Now, National Institutes of Standards and Technology put out a report explaining how that building fell. It had nothing to do with explosives or anything like that. There was a progressive fire and one of the columns fell off the moorings and the building collapsed. However, it is to me an engineering disgrace that a modern, conventional, steel-frame skyscraper like WTC 7 -- which was a huge building -- collapsed due to what were essentially localized fires on just a few floors. I'm quite shocked it didn't get more attention.

When in comes to the atmosphere in which trutherism emerged, it has been argued that there was good reason to mistrust the government. After Iraq, a lot of people believed the government had lied on a large scale about a matter of great importance. So why not suspect the government may be lying about other things too?

All conspiracy theories are based on a fundamental distrust of public institutions. In the case of 9/11 conspiracy theories, the original theories were created in late 2001. But when they really took off was 2003 and 2004 when it was discovered there were no WMDs in Iraq, and people did feel deceived. My own view is that it was a question of bad intelligence plus a U.S. government that was anxious to destroy the threat from Saddam Hussein.

What about the conspiracy theories in the 1990s surrounding Bill Clinton -- like the long list of people that he and Hillary supposedly killed. What was going on there? Was it about mistrust of government?

Did you ever have success disabusing anyone of their conspiracy theory?

Not once. The reason is that when you debate a conspiracy theorist it's like challenging an NFL football team to a game. Because conspiracy theorists have spent their lives memorizing every single detail necessary to win an argument. Even if you have the facts on your side in an abstract way, you're not going to win an argument if you have to go look at Google or go to the library to rebut every single point. They have hundreds of little confusing bits of information that they can throw at you. Even if you bat away 99 of them, the 100th, if you don't repute it immediately, they'll say, "Ah ha! There's an anomaly that you can't explain." The way they define the terms of the debate is that they just have to get you on one point, and then they have destroyed the validity of the conventional narrative.

The second thing is, it's a cult. And you can't disabuse a cult member of their beliefs, because it's central to their identity. Hardcore conspiracy theorists are attached to their conspiracy theories with the same force of conviction that religious adherents are attached to their religions. You can't rationally convince someone not to be a Christian or a Scientologist. That's their identity, that's who they are.