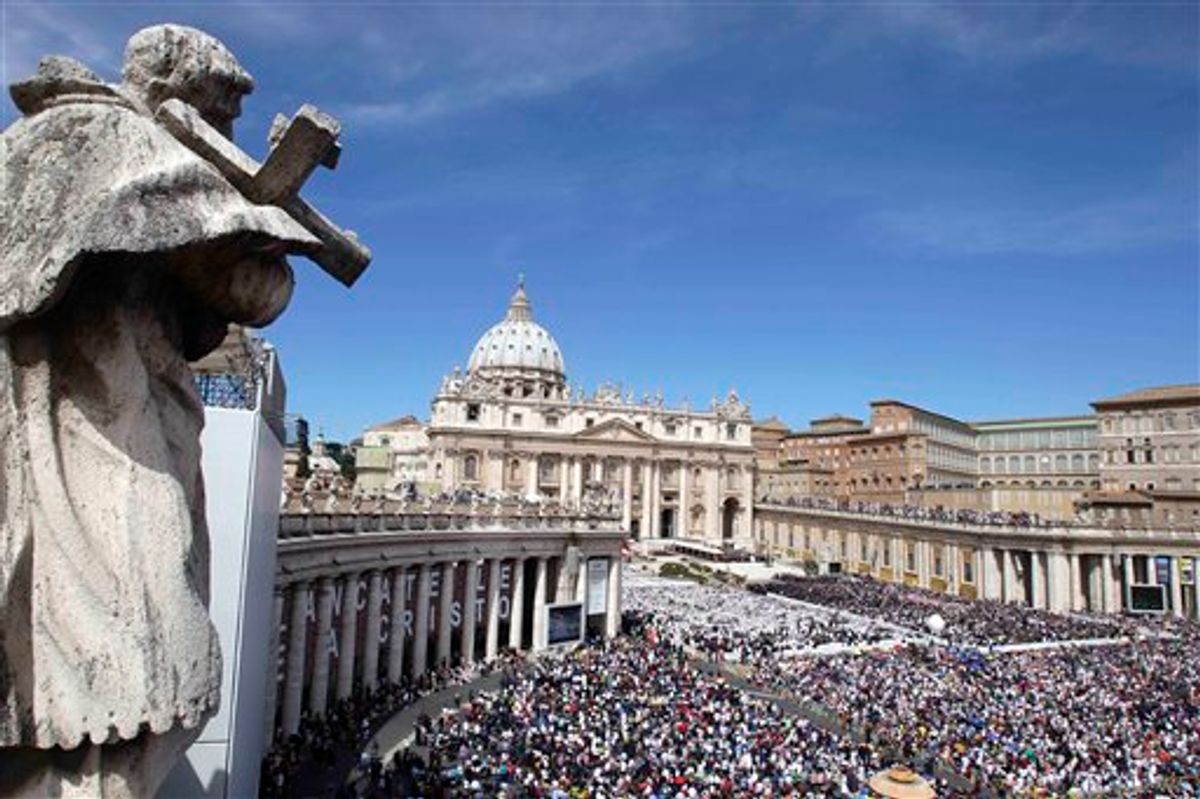 The crowd in Rome and in capitals around the world erupted in cheers, tears and applause as an enormous photo of a young, smiling John Paul was unveiled over the loggia of St. Peter's Basilica and a choir launched into hymn long associated with the Polish-born pope.

"He restored to Christianity its true face as a religion of hope," Benedict said in his homily, referring to John Paul's decisive role in helping bring down communism. Benedict dotted his remarks with personal recollections of a man he came to "revere" during their near-quarter century working together.

Beatification is the first major milestone on the path to possible sainthood, one of the Catholic Church's highest honors. A second miracle attributed to John Paul's intercession is needed for him to be canonized.

The beatification, the fastest in modern times, is a morale boost for a church scarred by the sex abuse crisis, but it has also triggered a new wave of anger from victims because the scandal occurred under John Paul's 27-year watch.

Police placed wide swaths of Rome even miles (kilometers) from the Vatican off limits to private cars to ensure security for the estimated 16 heads of state, eight prime ministers and five members of European royal houses attending.

Helicopters flew overhead, police boats patrolled the nearby Tiber River and some 5,000 uniformed troops manned police barricades to ensure priests, official delegations and those with coveted VIP passes could get to their places amid the throngs of pilgrims.

"He went all over the world," said Bishop Jean Zerbo of Bamako, Mali, who came to Rome for the ceremony. "Today, we're coming to him."

Benedict put John Paul on the fast-track for possible sainthood when he dispensed with the traditional five-year waiting period and allowed the beatification process to begin weeks after his April 2, 2005, death. Benedict was responding to chants of "Santo Subito!" or "Sainthood Immediately" which erupted during John Paul's funeral.

On Sunday, a group of pilgrims from Krakow affixed a banner to a fence outside the square that said "Santo Subito," evidence that for many of the faithful, John Paul already is a saint.

"John Paul was a wonderful man and it's a privilege to be here. It's wonderful to see people from all across the world," said Anne Honiball, 48, a nursing home administrator from Worthing, England who carried a small Union Jack flag.

"We missed the royal wedding but we are Catholics and this was a bit more important, I suppose," said Honiball, a former Protestant who converted to Catholicism 10 years ago.

Around the world, Catholics celebrated the beatification, jamming churches from Mexico to Australia to pray and watch broadcasts of the Rome Mass on television.

"He was a model and an inspiration who united the world with his extraordinary charisma," said John Paul Bustillo, a 16-year-old medical student named after the pontiff who turned out Sunday along with more than 3,000 for a six-mile (10-kilometer) race followed by a Mass near Manila Bay in the Philippines.

In John Paul's native Poland, tens of thousands of people gathered in rain in a major sanctuary in Krakow and in Wadowice, where the pontiff was born in 1920 as Karol Wojtyla. Prime Minister Donald Tusk and his wife Malgorzata watched the ceremony together with Wadowice residents.

"I wonder what we would have been like and what would not have happened if we had not had our pope," the PAP agency quoted Tusk as saying. "All that good that we all have received is still working."

Speaking in Latin, Benedict pronounced John Paul "Blessed" shortly after the start of the Mass, held under bright blue skies and amid a sea of Poland's red and white flags -- a scene reminiscent of John Paul's 2005 funeral, when some 3 million people paid homage to the pope.

Benedict recalled that day six years ago, saying the grief the world felt then was tempered by immense gratitude for his life and pontificate.

"Even then, we perceived the fragrance of his sanctity," Benedict said, explaining the "reasonable haste" with which John Paul was being honored.

Benedict said that through John Paul's faith, courage and strength -- "the strength of a titan, a strength which came to him from God" -- John Paul had turned back the seemingly "irreversible" tide of Marxism.

"He rightly reclaimed for Christianity that impulse of hope which had in some sense faltered before Marxism and the ideology of progress," Benedict said.

After the nearly 3-hour Mass, Benedict prayed before John Paul's coffin inside St. Peter's Basilica, which was expected to stay open through the night and for as long as it takes to accommodate the throngs of faithful who want to pay their respects.

The sealed coffin will ultimately be moved to a side chapel inside the basilica just next to Michelangelo's famous marble "Pieta" statue.

Police put the figure of those attending the Mass at 1.5 million; only a few hundred thousand could fit into St. Peter's Square and the surrounding streets but others watched it on some of the 14 huge TV screens set up around town or listened to it on radios in Polish or Italian.

"I am disappointed but also happy to be here for the atmosphere," said Boleslaw Wisniewski, 83, who came with five members of his family by bus from Warsaw. He stood listening to the music drifting over the packed crowd, but could see nothing.

During the Mass, Benedict received a silver reliquary holding a vial of blood taken from John Paul during his final hosptalization. The relic, a key feature of beatification ceremonies, will be available for the faithful to venerate.

It was presented to him by Sister Tobiana, the Polish nun who tended to John Paul throughout his pontificate, and Sister Marie Simone-Pierre of France, whose inexplicable recovery from Parkinson's disease was decreed to be the miracle necessary for John Paul to be beatified.

Thousands of pilgrims, many of them from John Paul's native Poland, spent the night in sleeping bags on bridges and in piazzas around town, and then packed St. Peter's as soon as the barricades opened over an hour in advance because the crowds were too great.

They stood shoulder-to-shoulder on the main boulevard leading to the Vatican, Via della Conciliazione, as well as on side streets around it and the bridges crossing the Tiber leading to St. Peter's waving flags from Argentina, Germany, Britain and Lebanon.

It's the fastest beatification on record, coming just six years after John Paul died and beating out the beatification of Mother Teresa by a few days.

The beatification ceremonies kicked off officially with a all-night prayer vigil that began Saturday on Rome's ancient Circus Maximus field and continued as pilgrims moved around eight churches that stayed open all night, a "white night" of prayer in honor of the late pope.

"The weather is mild and so it will not be a problem to pass the night here, and there is also a very nice atmosphere," said Pauline Rosenfeld, a 20-year-old pilgrim from Paris sitting with friends in her sleeping bag gearing up for a night spent outdoors.

The beatification is taking place despite a drumbeat of criticism about the record speed with which John Paul is being honored, and continued outrage about clerical abuse: Many of the crimes and cover-ups of priests who raped children occurred on John Paul's 27-year watch.

Vatican officials have insisted that John Paul deserves beatification despite the fallout from the abuse scandal, saying the saint-making process isn't a judgment of how he administered the church but rather whether he lived a life of Christian virtue.

But victims' groups such as the U.S. Survivors Network for Those Abused by Priests have said the speedy beatification was just "rubbing more salt in these wounds" of victims.

Rome itself seemed invaded by Poles overjoyed that their native son was being honored. Special trains, planes and buses shuttled Poles in for the beatification.

Anna Fotyga, a former Polish foreign minister and member of Poland's parliament, arrived on a special train Sunday morning carrying the Polish parliamentary delegation. She reminisced about John Paul's impact on communist Poland in the late 1970s and 80s.

"I was a student at that time, and actually seeing him, listening to him started transformation in Poland, I am sure," she said.