Why it's good to be a high school loser 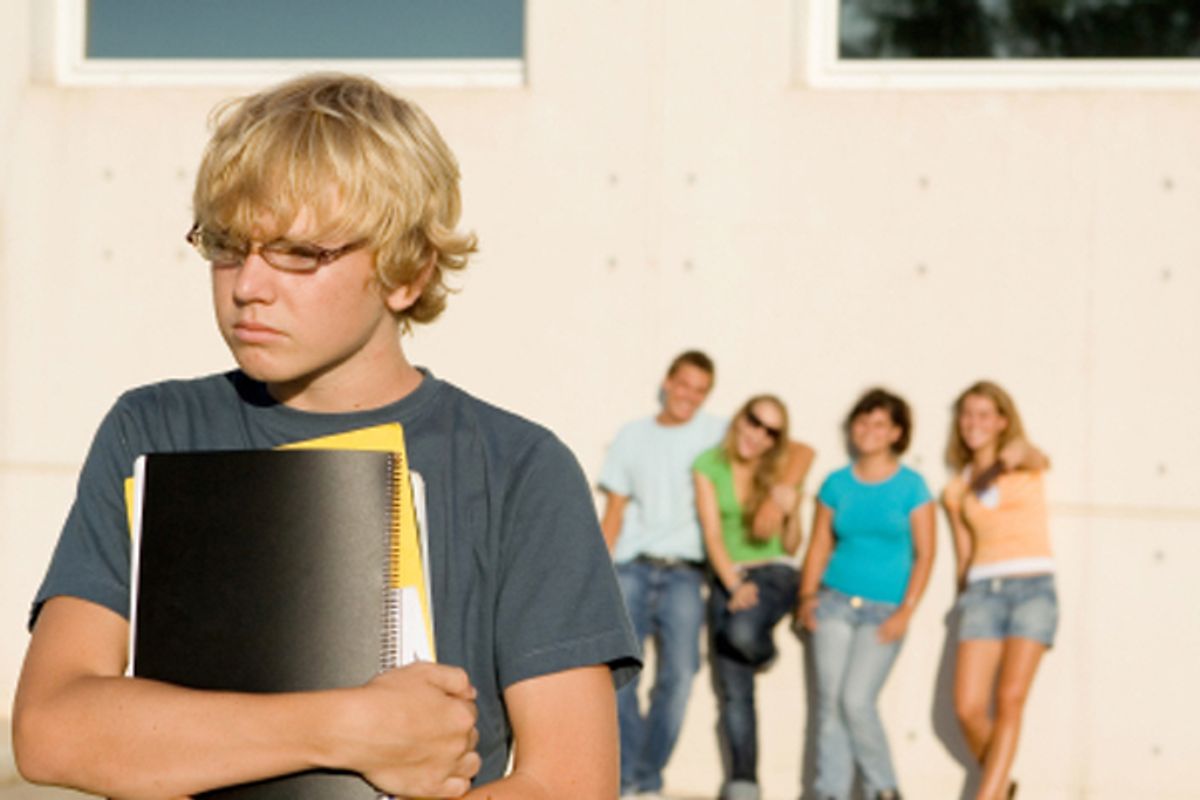 Americans are obsessed with high school. Whether you were the head cheerleader or president of the math club, whether you're still trying to forget that time you got a swirlie or you wish you could relive your glory days as homecoming king, those years take up a lot of space in our minds. In movies from "Sixteen Candles" to "Ten Things I Hate About You" to this week's "Prom," social life is determined by where one sits in the cafeteria. Labels (cool kids, freaks, emos, even Twihards and Gleeks) are especially important when you're a teenager, and can be powerful enough to define an entire high school experience.

In the new book "The Geeks Shall Inherit the Earth," author Alexandra Robbins goes back to high school (seven of them, actually) and follows the lives of six outsiders and one self-proclaimed "popular bitch" in order to document the experience of adolescent popularity from hallways and classrooms and football fields, the locker-lined trenches of high school. Robbins has made a career of writing about social behavior in the context of academia. Her previous books "Pledged" and "Overachievers" are similarly immersive examinations, delving into the hazards of sorority life and high-achieving kids, respectively.

High school has changed quite a bit in the past few years. Bullying has become a huge topic of discussion. The rise of social networking sites like Facebook have become part of student's daily rituals, something to be monitored and adjusted between homeroom and social studies. But some things remain the same -- namely, there are cool kids and there are losers. In "Geeks," Robbins suggests that being popular in high school is not all it's cracked up to be and can be detrimental to students. She coins the term "quirk theory" (the idea that the very traits that make students outsiders in high school will be beneficial to them as adults) as a means of reconsidering how important it is for others to think you're cool.

Salon spoke with Robbins about conformity, being different and the dark side of popularity.

Do you think that our culture is unusually concerned with popularity in high school?

Our culture is unusually and increasingly concerned with popularity. Part of the reason is our obsessive celebrity culture, and there also seems to be a trend to define young people as either smashingly successful or not, which comes into play in academics and in the social world. The number of outsider labels in schools is increasing, while the ideal image of a mainstream popular kid is narrowing. While perhaps 2 percent of the students in high school are popular and mainstream, the rest of them are outsiders. Either you're popular or you're not. There's no middle ground any more.

Since so few people are popular in high school, most of us know what it feels like to be an outsider, at least temporarily. How do high school social hierarchies continue to affect us into adulthood?

I'm saying that they don't affect us after high school. Once you get out of that atmosphere, the world opens up. As glib as that sounds, it's true, because school is one of the most conformist, rigid atmospheres -- both because of the way high school operates and because of the psychology of the age group. After high school, the same qualities that cause a student to be an outsider suddenly become appealing.

You point out that it's the kids on the fringe that eventually do best, because they're able to distinguish themselves later in life.

Right. In high school, popularity is more important than anywhere else, but popularity is not a measure of likability. Popularity is composed of three elements: visibility, recognizability and influence. The people in school who have those three qualities are often that way because they conform to a standard. Meanwhile, the kids who won't or can't conform are the ones who are left out. Nonconformity is a wonderful trait, and it's going to be valued in adulthood. If you're different in school, that makes you an outsider. If you're different as an adult, that makes you interesting, fun and often successful.

You refer to the kids who are excluded as the "cafeteria fringe," and they're the ones you primarily follow in the book. What different "types" of kids did you identify?

I followed a loner, a gamer, a band geek, a new girl who was also foreign, a nerd, a weird girl, and then to contrast their experiences I also followed a popular bitch. I didn't label the popular bitch. I said "maybe you want to be the cheerleading captain?" and she said, "No, I'm proud of being a bitch." So I said, "OK, fine." There are a lot of new labels. I had heard of emo and indie when I started the book, but I hadn't heard of Twihards, which got really popular. I hadn't heard of scenes -- they're similar to hipsters. Bros is another new one. All this is to say that there are an increasing number of labels. These labels are distressing, because they are no longer just used to describe what students do; now these labels also describe how people feel. Or how they are. And that's sort of scary. The level of conformity is expanding to describe students beyond their appearances.

What role do teachers play in popularity? What are the "teacher cliques" that you describe in the book?

That was one of the biggest surprises for me -- the adults who are supposed to be modeling social behavior for students are in some cases openly forming their own cliques, with names. That blew my mind. Even schools where they're paying thousands of dollars to sponsor anti-bullying programs and trying to ease social tension among the student body -- these same schools have teacher clique issues that they're not addressing. There was one teacher clique called Teachers Against Dumbasses. They actually go around wearing T-shirts advertising their clique! The students are aware of which teachers are allied with others. They hear teachers grumbling; they know when teachers are dating each other. Even worse, often the teachers are making associations and judgments and in some cases explicit descriptions about students based on their labels. You can't expect students to know what appropriate social behavior is when the teachers aren't following that model themselves.

Bullying has become a much-debated topic. Do you think that bullying has really gotten worse over the past few years, or has it just become different?

Bullying has gotten worse partly because of narrowing ideals, meaning that more students are seen as people who can be picked on because they're not in the popular crowd. What I call the "online cafeteria" (social networking sites like Facebook and MySpace) also plays a role. These sites serve the same purpose as the cafeteria. They're public spaces, mostly unsupervised, where students can clearly define who belongs with which group. Facebook can be hugely demoralizing. A lot of students feel like they have to be their own publicists -- constantly updating their statuses, and making sure they have the best photos of themselves tagged, and sometimes creating a false social life so they can seem more popular than they really are. That's exhausting. I'm so glad I'm not in high school anymore!

The book does say that it gets better, but for all outsiders, including and not limited to LGBT kids. It gets better because school is part of the reason there is a social hierarchy in the first place. One thing that hasn't been discussed much in the bullying debate is that schools often address bullying with little Band-Aid campaigns. They try to address it on a case-by-case basis. But the schools themselves often have traditions or policies that in and of themselves point students to which ones should be elevated in the hierarchy and which ones should be lowered down the ladder. For example, whom do schools highlight at pep rallies? Athletes and cheerleaders. They are making those students visible, and one qualification for popularity is visibility. That brings up another issue -- politicians are always complaining about the lack of scientists produced in this country. Well, if schools celebrated student scientists the same way they celebrate student athletes, then more students might be encouraged to pursue science. Instead, science is geeky, and schools are partly responsible for painting it that way.

How do you think that pop culture depictions in movies like "Mean Girls" or series like "Gossip Girl" and "90210" have changed how we think about high school?

I do think that certain shows have paved the way for girls to think it's cool to be a bitch. "Bitch" is such a mainstream term now, and it's almost seen as a badge of honor. I think there's a connection between the Machiavellian strategizing on reality television where people will do anything in order to be famous, even if they're portrayed as a villain, and certain girls who apply this to their race for popularity in schools.

How did you see race and class fitting into conceptions of popularity? For some of your subjects that's a bigger deal than it is for others.

It all depends on who comprises the popular crowd of a school, and what the racial and economic demographics are at that school. In some cases, being a minority automatically puts you at a different table than the popular crowd. There are some schools I studied in which certain cafeteria tables are referred to as "Asia," "Mexico" or "Africa." At one Southern school, some popular kids keep the price tags on their clothing so that classmates can see that they paid full price at a nondiscount store.

What are things you think should be done to change the culture of high school popularity?

Schools could vary cafeteria seating options so that groups of different sizes have a place to eat -- put four chairs at one table and 10 chairs at another. That automatically says only a certain sized group can sit here, and if you don't get early enough you're automatically an outsider for the day. A more radical idea is to try assigned lunch seating, at least once a week.

I thought your focus on lunchtime was really interesting. It immediately made me think of myself in ninth grade. I was new, and the two or three other kids I did know had a different lunch period than I did. Lunch became this thing I dreaded. It was the hugest deal in the world.

It is absolutely the hugest deal in the world if you're a high school student. Because that's the one physical place where you are expected to choose where you belong, and find where you belong and then fit in there. That's scary. While I can imagine that some students wouldn't be thrilled with the idea of assigned seating at lunch, even once in a while, it is a way to give students the opportunity to connect with someone different.

It also takes off a lot of pressure of where to sit and with whom.

There's assigned seating at lunch in elementary school, where classes sit together at specific times. But just when students are starting to form cliques, that's when we say, OK, sit wherever you want. It exacerbates the problem. I'm not saying they need assigned seating every day; just that it's something to try some of the time. Beyond the cafeteria, I think it's important for parents not to worry too much about their kid's social status. If your kid is happy having one or two close friends and not being in the popular crowd, leave it. Popularity can be destructive. To be popular does not mean to be liked, and it also does not mean to be happy. Encouraging your child to be "popular" and "cool" can be hugely destructive to a student's psyche. It can actually be much better for students to be outside the popular crowd.