Why does your doctor hate alternative medicine?

That's the question TV shows and outspoken celebs keep asking, but the truth is far more complicated than that 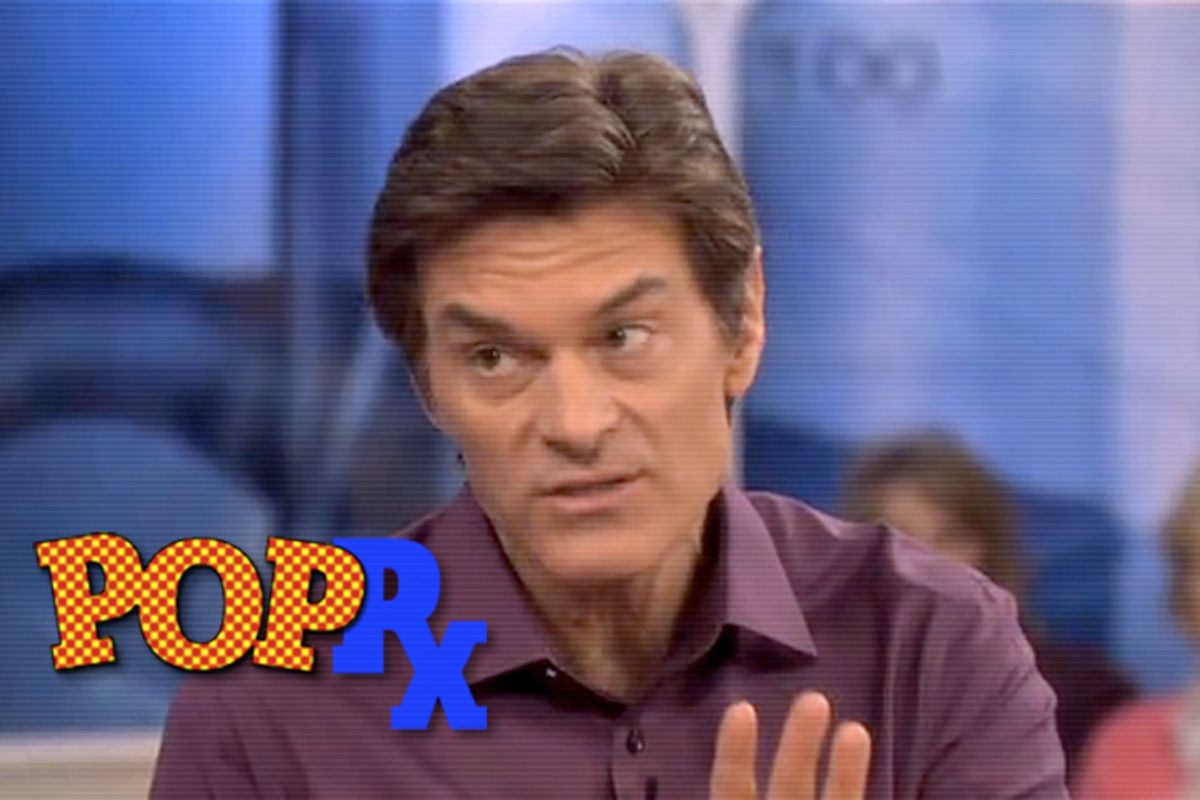 On his popular TV show last week, Dr. Mehmet Oz ran a segment titled "Why Your Doctor Is Afraid of Alternative Medicine." The show pitted Oz (who has found himself under fire for dubious doctoring) against Dr. Steve Novella, a Yale neurologist and blogger who is skeptical of alt-med treatments.

Who won? You can watch the videos for yourself here. But ultimately, it doesn't matter, because in the real world -- i.e., drugstore aisles across America -- the business of alternative and complementary medicine is booming. Studies show that 1 in 3 Americans have tried alternative therapies, generating close to $50 billion in sales for the industry. So let's zero in on a different question: Why is alternative medicine so popular in America?

The reasons, of course, are many. But here's one unexpected answer: politics. While the left and right almost never agree, neither wants the government to mess with their medicine cabinet. The left has that anti-authority streak that bristles at the medical establishment, while the right has a visceral opposition to any government regulation -- in this case, the Food and Drug Adminstration. In fact, the history of the modern alternative medical movement started in the halls of Congress back in the early 1990s. That's when Democratic Sen. Tom Harkin, having cured his allergies using bee pollen, became an alt-med convert. Harkin controlled the purse strings of the National Institutes of Health. He took $2 million of its then $11 billion budget and, to the dismay of many scientists, established the National Center for Complementary and Alternative Medicine (NCCAM). Later in the decade, Harkin's Republican colleague, Sen. Orin Hatch of Utah, joined the fight. Like Harkin, Hatch believed that bee pollen had cured his allergies. In an effort to choke off the FDA's ability to regulate dietary supplements, the two wrote the Dietary Supplement Health and Education Act in 1994. The law passed unanimously, shielding the supplement industry from anything other than voluntary regulation. With the FDA able to intervene only after the drug has been made available to the public (as opposed to its typical, rigorous product testing before a drug hits shelves everywhere), a business began to explode. (It's worth noting that many alternative medicine and dietary supplement companies are based in Hatch's home state of Utah).

But there are qualities in the American psyche that also favor alternative remedies. First, there's our natural inclination to keep fighting no matter the odds (other cultures are certainly more fatalistic). Our can-do attitude fuels a desire to explore any and all frontiers -- be it the West, space or the cutting edge of medicine. Second, science, including medical science, just isn't what it used to be. Paul Starr, in his Pulitzer Prize winning book "The Social Transformation of American Medicine," recalls that the post-World War II decades "gave science unprecedented recognition as a national asset ... the research effort that produced radar, the atom bomb and penicillin persuaded even the skeptical that science was vital to national security."

But as the Berlin Wall fell, our collective psyche lost that sense of scientific superiority, which coincided with a growing recognition that medicine had limits, and that we were spending a lot of money on health care with ever-diminishing returns. Medicine and doctors' reputations declined as we moved from curing acute illness -- like infections with antibiotics and vaccines -- to battling the tyranny of the chronic: heart disease, diabetes, cancer and others. These are complicated diseases and some, like chronic fatigue syndrome, are poorly understood. There's nothing in medicine that can cure most of these ailments, and their treatments usually mean lifelong doses of medications, tests and hospitalizations, all of which have side effects. Skepticism crept in, and with it, room for alternative views. Cancer, where chemotherapy can kill you just as readily as the disease itself, is ripe with alternative medical therapies, from homeopathy to herbal medicine to faith healing.

All that aside, I don't think Mehmet Oz's assertion -- that doctors are afraid of alternative medicine -- is fair or correct. (For that matter, I don't think similar assertions made by other alt-med media mavens like Deepak Chopra are, either.) It sets up the stereotypical "us versus them" conflict that TV producers love, but the real world is far more nuanced. Out here, it's more accurate to say most doctors have a love-hate relationship with alternative medicine. We want to know -- and care about -- what health tricks people are trying off the prescription pad. Our frustration comes in because we have very little idea whether or not these medicines are safe and effective. That's because, as I mentioned earlier, the alt-med business is accountable to nobody. That's unlike conventional pharmaceuticals, which go through rigorous testing before they're approved for sale and are subject to close oversight once they're on the shelves of pharmacies.

As doctors, we rely on the FDA to help us determine whether a drug is safe and effective. If it's safe but not effective, you can take all you want because it's not going to hurt you. On the other hand, if it's unsafe and ineffective, it could kill you. For most of the stuff packed into alternative pill bottles, we have no idea which is a blessing and which is a curse.

Take the once popular, now banned alt-med ephedra. Athletes and body builders gravitated to it as a performance enhancer. Then people started getting sick. One company that made ephedra, Metabolife, received 13,000 complaints of adverse events. When the FDA dug deeper into the ephedra problem in 1997, it ran into the formidable duo of Sens. Harkin and Hatch, who -- along with millions of dollars from the supplement industry -- stopped the agency faster than a speeding bullet. But that didn't stop doctors from looking more closely. In 2000, the New England Journal of Medicine published a paper linking cases of sudden death to ephedra. Still, no ban. Then in 2001 and 2003, two professional athletes, Korey Stringer of the Minnesota Vikings and Steve Bechler of the Baltimore Orioles, died due to ephedra toxicity. Their deaths were the Kryptonite the FDA needed to push for and finally ban the drug in 2004.

The problems with alternative medicines can also be more subtle than death, and therefore, harder to find. Consider one popular alt-med remedy for depression -- St. John's Wort. While it's thought to help mild to moderate depression, it can harm patients with HIV/AIDS by lowering levels of their vital anti-viral drugs. We didn't know this until scientists, and not the dietary supplement industry, researched it. And you still won't see any warnings about it on the bottle's label. Had the FDA done its due diligence on St. John's Wort, it would have made that discovery and put it in the drug information available to health professionals and HIV patients everywhere.

So what's an empowered, motivated patient to do when standing in front of the herb and supplement aisle at Whole Foods? My only advice is something a friend and mentor of mine once told me. "Be open-minded, but not so much that your brains fall out." For what it's worth, the NCCAM website can provide some education about various alt-med remedies. On the other hand, it's worth noting 2009 reports that despite having spent $2.5 billion in taxpayer dollars looking into alternative therapies, the government hasn't found much that works.

Despite that news, none of this is going away anytime soon. First, because celebri-docs like Mehmet Oz (along with Deepak Chopra, Mark Hyman, Christiane Northrup and others) are out there speaking to millions with their endorsements of alt-med remedies. Then there are the celebrities who aren't doctors, like Suzanne Somers and Jenny McCarthy, attesting to their own stories. "I have my science. His name is Evan," McCarthy is fond of saying (referring to her son).

An ironic twist in all this is that mainstream doctors, who once shunned colleagues pushing alternative remedies, now see an opportunity to make money right alongside them. That's why many well-respected academic centers -- from Harvard to UCSF -- now have centers for alternative medicine. "If hospitals don't get involved in these kinds of programs, they will lose patients because patients will go elsewhere," said one former healthcare executive.

Perhaps the wisest insight in this debate comes not from a health expert but a jester, Australian comedian Tim Minchin. "You know what they call alternative medicine that's been proved to work? Medicine."