President Obama vanquished the terrorist who murdered innocent Americans in 2001. Can we have our country back now? 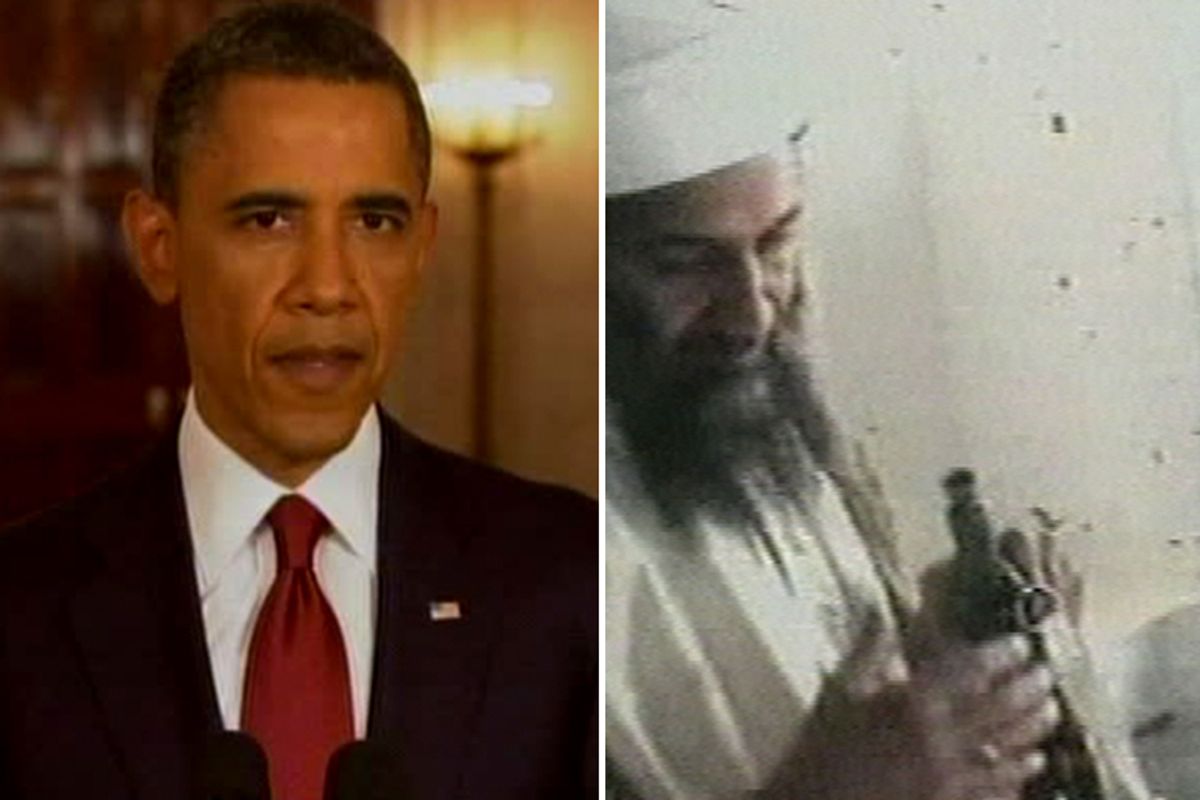 Eight years to the day after President Bush stood before a banner announcing "Mission Accomplished" in Iraq, prematurely declaring the end of combat operations there, President Obama announced Sunday night that an operation he authorized had killed al-Qaida leader Osama bin Laden. The spoiled son of privilege, who thought it his birthright to dispatch thousands of innocents to their death for the crime of not sharing his twisted vision of Islam, is dead.

After more than 7,000 American deaths and tens of thousands of casualties in wars in Iraq and Afghanistan, the move against bin Laden seems to have been accomplished by a small group of American military special forces. It is too early to say what role the massive American military operations in the region played; we'll be asking that question for a long time.

We'll be asking a lot of questions: Are we safer? Or, at least in the short term, does bin Laden's killing make retaliation more likely? We're set to draw down forces in Afghanistan soon: Will that happen; will it happen more quickly; or will there be a local backlash that keeps us there longer?

It's my job to think about all those consequences of this stunning news, which came near midnight Eastern time on a Sunday night. I also couldn't help noticing it came roughly 24 hours after the president had dispatched his bizarro-world enemy, Donald Trump, another spoiled son of privilege, coincidentally. How strange was that? The contrast between the general idiocy of 24/7 American politics, and what's really at stake in all of Obama's decisions, had never been so stark.

For his part, the president used the event to reinforce his view of America and its place in the world. He began with the personal, talking about the way "the images of 9/11 are seared into our national memory," while noting "the worst images are those that were unseen by the world, the empty seat at the dinner table ... 3,000 citizens taken from us, leaving a gaping hole in our hearts." He reaffirmed what he noted was also President Bush's stance: "The United States is not, and never will be, at war with Islam: bin Laden was not a Muslim leader; he was a mass murderer of Muslims." He urged Americans to "think back to the sense of unity that prevailed on September 11. We reaffirmed our ties to each other, and our love of community and country. No matter what God we prayed to, or what race or ethnicity we were, we were united as one American family." And he closed with a rededication to his version of American exceptionalism: "We can do these things not just because of wealth and power, but because of who we are: One nation, under God, indivisible, with liberty and justice for all."

After Obama's remarks, pundits were quick to score his achievement politically. NBC's Chuck Todd called it "the most significant accomplishment for the president in this term." And it may be. A crowd assembled, chanting and singing, outside the White House. There was a spontaneous gathering on Sixth Avenue in New York; up in the Bronx, students at Fordham University clustered in the main campus green to celebrate the news and remember those who died. For the families of victims, it's a long wait for closure; I can't presume to know how anyone who lost a loved one on 9/11 feels about bin Laden's killing. I hope it helps.

After years of Catholic school, I am constitutionally unable to feel joyous about anyone being killed, but I got close tonight with bin Laden. He killed thousands of innocent people -- and again, it was that incomparable American tableau: Muslims, Jews, Catholics; waiters, firefighters, investment bankers; gays and straights; mothers and fathers of every race. For months, reading the New York Times "Portraits of Grief" felt like a responsibility of American citizenship; every day you'd find someone almost exactly like you, but also as different from you as possible -- except they also loved Bruce Springsteen (a lot of them did) or had a child your age or were born on your father's birthday. We saw the beauty and bravery and diversity of America in that tragedy, and I wish it didn't take a tragedy for us to do so.

I also wish this achievement could mean we get our country back, the one before the Patriot Act, before FISA, before rendition and torture and Guantánamo; before we began giving up the freedom and belief in due process that makes us Americans, out of our fear of totalitarians like bin Laden. It won't happen overnight, but I'm going to choose to think this could be a first step.

It's not a night for political gloating: President Bush issued this gracious (I guess) statement, which Laura Bush, kind of bizarrely, or maybe not, posted on Facebook:

Earlier this evening, President Obama called to inform me that American forces killed Osama bin Laden, the leader of the al Qaeda network that attacked America on September 11, 2001. I congratulated him and the men and women of our military and intelligence communities who devoted their lives to this mission. They have our everlasting gratitude. This momentous achievement marks a victory for America, for people who seek peace around the world, and for all those who lost loved ones on September 11, 2001. The fight against terror goes on, but tonight America has sent an unmistakable message: No matter how long it takes, justice will be done.

A victory "for those who seek peace around the world." Hmmm. I hope so. I'm going to take the former president at his word, and pray that's our direction from here.