How will bin Laden's death affect the economy?

If Americans translate "we won" into increased confidence about the future, economic conditions could improve 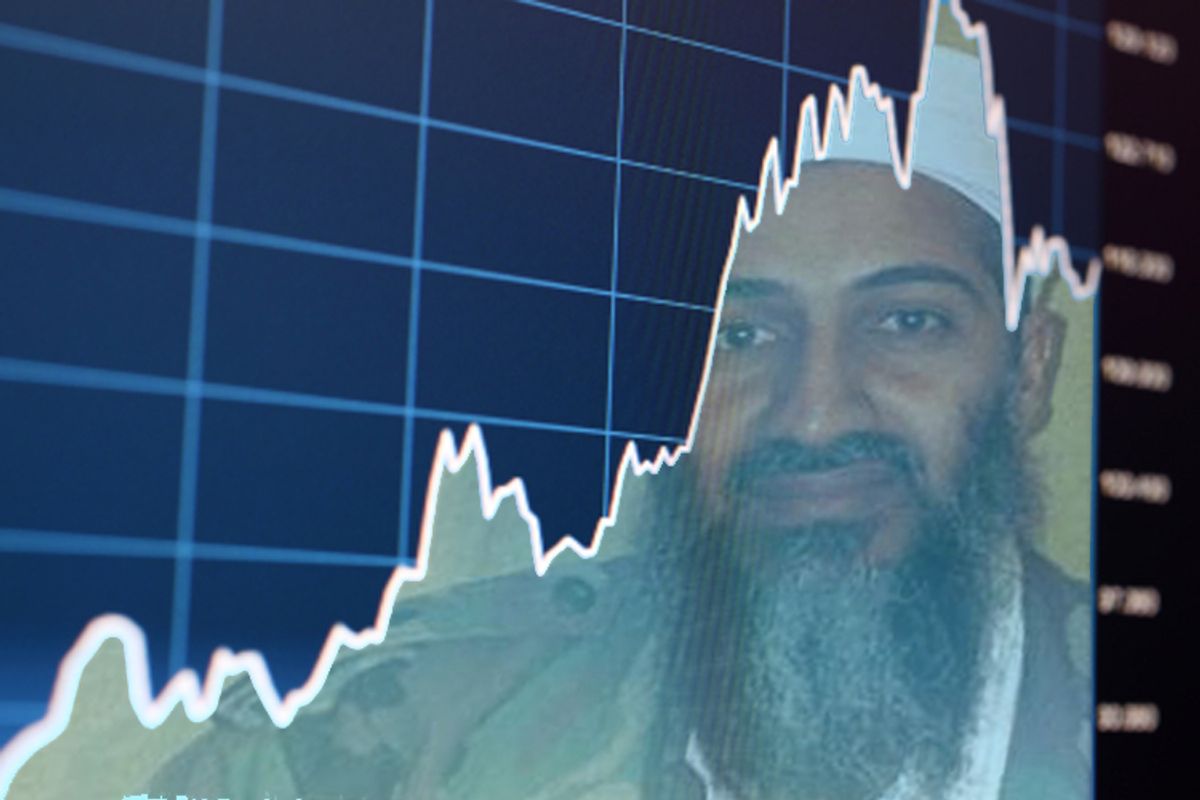 Never mind the chants of "We Are The Champions" in front of the White House, or the explosions of Twitter-satisfaction and Facebook virtual back-slapping. The political analysts who warn that Osama bin Laden's death does not guarantee President Obama's reelection are surely right. The economy doomed George H. W. Bush, despite his Gulf War triumphalism, and the economy will undoubtedly settle the question of Obama's future as well.

But the question of how bin Laden's death intersects with Obama's future gets a little more complicated when one askes whether or not this historic event will itself affect the economy. And by this I don't mean short term blips in the stock market driven by emotion, but a meaningful longterm positive change.

It's a tough call: Paul Krugman certainly has grounds for his insta-observation that "it's hard to see how it changes anything important." The supply-and-demand equation for oil doesn't magically reverse itself because bin Laden is dead, nor are American employers suddenly likely to go on a hiring spree.

But there are some ways in which bin Laden's execution at the hands of an elite team of Navy Seals could influence macroeconomic conditions. The first and most obvious place to look at is the price of gas. To the extent that the rise in the price of oil is in part a result of  concern about Mideast instability, bin Laden's death could be good news if it reinforces the Arab Spring narrative of a widespread evolution towards constitutional democracy, rather than dictatorship or Islamic theocracy. There's even a chance that the death of bin Laden may ease the path to an exit from Afghanistan.

Even more speculatively, if the resolve with which the White House pursued its goal of dealing "justice" to bin Laden is duplicated in bringing both the Afghanistan war and the Libya mess to expedited conclusions, that could also result in an enormous lowering of tension in the region, which could further help eliminate the portion of the rise in the price of oil that is generated by fear of more Mideast chaos.

Another theory suggests that Obama will now have a stronger hand to play in Congressional negotiations on the budget. That doesn't mean he's suddenly going to have the mojo to push through another round of stimulus, but it is at least conceivable that he could thwart Republican attempts at short-term spending cuts tied to a vote on the debt ceiling that would create additional unnecessary drags on economic growth.

But probably the most significant way in which bin Laden's death could achieve positive macroeconomic change is by boosting the general sense of confidence Americans have in the future. A less scary world -- one in which, as economists like to say, "there is a net reduction in risk premia" -- is a world in which people feel more secure, and more willing to take entrepreneurial chances. It will be of enormous benefit to Obama and the economy if Americans attribute that sense of security to the notion that their president knows what he is doing.

Bin Laden's death has resulted in an upsurge of chatter about Obama's "long game." While the political world obsesses with day-by-day controversies and the media can't see farther than the latest horse-race development, so the theory goes, Obama is supposedly keeping his focus on the long run.

There are definite problems with this thesis -- particularly insofar as how Obama has handled budget negotiations to this point. All too often the "long game"  (which is closely related to the fanciful notion that Obama is playing a ten-dimensional game of chess while all the rest of us are fooling with checkers) is used to whitewash his obvious mistakes and missteps in the present. But the emerging details of the bin Laden mission depict a commander-in-chief who had his eye on the big picture. Suddenly, he seems like a leader who was focusing on serious things while others went nuts about birth certificates or whether or not the president issued an official proclamation of Easter.

The really interesting thing to watch is whether Obama's success on the bin Laden front inspires a retroactive reassessment of what Obama has already accomplished, which in turn will boost support for his initiatives in the future. Will more credence be given to the argument that his stimulus spending arrested our nation's descent into a Great Depression, that his healthcare reform really will vastly broaden insurance coverage and makes a stab at slowing down the growth in healthcare costs, that his Department of Energy and EPA are effectively developing new sources of clean energy and tackling the challenge of climate change?

Confidence is contagious, and no matter what you think about the unseemliness of cheering and euphoria for a man's death, there can be little question that this was an epochal event. My 13-year-old son, who has no actual memory of the Twin Towers falling, was texting his friends like a madman last night. One responded to him: "I guess that means we won."

Of course, on a substantive level, that's not true at all. You don't "win" a war on terrorism. We haven't "won" in Afghanistan. We've spent trillions of dollars fighting terrorism since 9/11 and we can't even put a price on the erosion of our civil liberties. But at a brute emotional level I think that's still a fair description of how a lot of Americans feel today. It's flatly barbaric, but after a little Old Testament-style eye-for-an-eye vengeance they just feel better. To the extent that Obama gets credit, it could very well prompt a change in how Americans feel about having him as their president. And to the extent that that boosts the "animal spirits" so necessary for a thriving economy, the economy will improve.