Does bin Laden's death matter in the Arab Spring?

While the al-Qaida chief was holed up in Pakistan, the world around him changed in a hurry 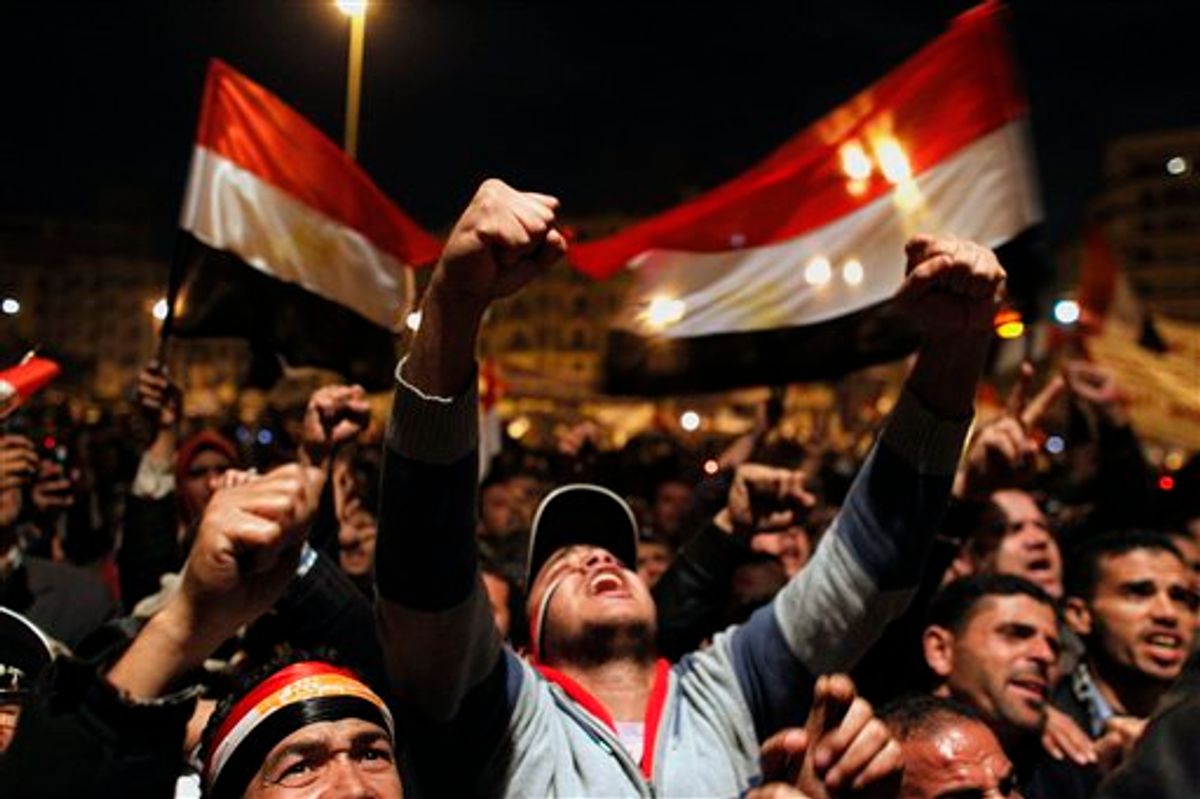 FILE - In this Feb. 10, 2011 file photo, anti-government protesters demonstrate in Tahrir Square in downtown Cairo, Egypt. Osama bin Laden and his jihadi rhetoric once resonated with millions, especially those in the Arab world who saw militant Islam as their best hope for throwing off the shackles of corrupt, oppressive governments. But 10 years after 9/11, the dominant theme in the uprisings across the Middle East is a clamor for democracy _ with al-Qaida's militant ideology largely relegated to the sidelines. (AP Photo/Tara Todras-Whitehill, File) (AP)
--

"Ambivalent" is the only way to describe reactions across the Middle East to news of Osama Bin Laden's death Sunday. And that's not all that surprising. Bin Laden cast a long shadow over the Muslim world during the past decade. He ushered in war and designed myriad indiscriminate attacks that claimed the lives of foreign nationals and Muslims alike. His specter helped prop up authoritarian regimes -- think Pervez Musharaf and Hosni Mubarak -- who maintained U.S. support by projecting the visage of the lesser of two hypothetical evils. And, while the al-Qaida chief hid away in his multimillion-dollar compound in suburban Pakistan, the world around him changed.

Thousands upon thousands of innocent Arabs died on [bin Laden's] direct orders. The list of actual and interdicted terrorist attacks ordered by Al Qaeda against fellow Arabs is so long that there is insufficient space to list them, but they number nearly 55 separate acts since 2003, excluding those committed in Iraq...Al Qaeda had become a much resented burden on the Arab psyche as the backlash against the Muslim-on-Muslim terrorism could no longer be dismissed as merely collateral damage to Al Qaeda's western targets.

Indeed, an opinion survey put out by the Pew Research Center charts Bin Laden's fall from grace in the minds of Muslims. Between 2003 and 2011, confidence in the terrorist leader among Muslims in the Palestinian territory dropped from 72 percent to 34 percent -- a 38 point drop. In Indeonesia, confidence in bin Laden fell from 59 percent to 26 percent. In the same survey, Al-Qaida's favorability is similarly low. And the same trend can be seen throughout the Muslim world.

A new generation of Arab youths have seen the destruction wrought by bin Laden's rigid ideology, and grown weary of his spiritual wars against foreign imperialists. Now many instead focus their anger against repressive regimes back home. The black-and-white world view of the past has faded.

According to Time's Rania Abouzeid:

In the old days, if an autocratic regime was pro-American and anti-Islamist, its opponents were anti-American and Islamist almost by default, and vice versa. But today's young Arabs have rejected both autocrats and extremists. "It's certainly coincidence that the two events are linked in time, but in fact it's logical because the death of bin Laden symbolized the marginalization of Al-Qaeda in the Middle East," Roy says...For a decade Arabs have largely been viewed through the prism of 9/11. If nothing else, Bin Laden's death may also help lay that ghost to rest.

Few would suggest that the threat of Islamic terrorism has vanished over the past decade. Nor would it be accurate to downplay the Arab world's animus toward the U.S. But bin Laden's violent, wayward brand of cosmic justice enjoys a far less eminent position in the Middle East than at any point in years; and betrays a global Muslim community vastly more complex than the credo of al-Qaida would suggest. Bin Laden's death marks an emotional watershed for the American people. But, in the Middle East, it may be more an echo of an outmoded ideology.