Will neocons abandon their rhetoric now? No, because Osama was never the enemy 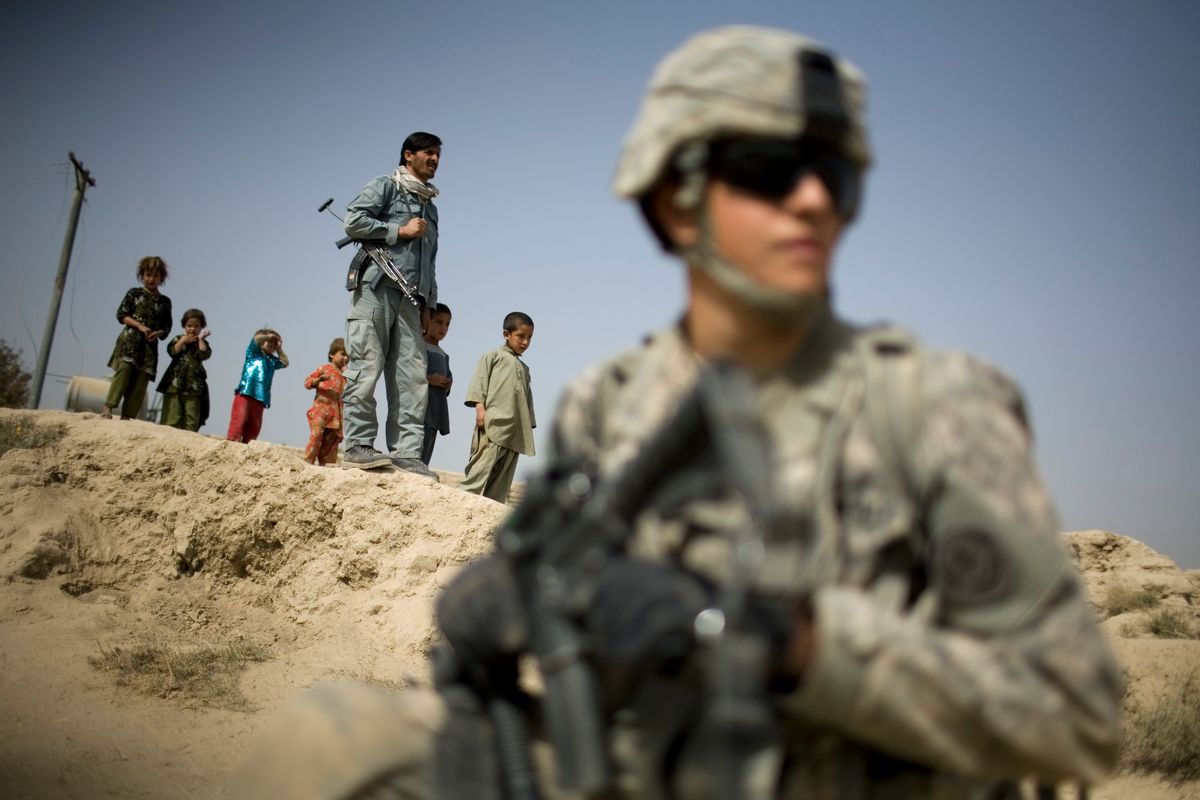 When the al-Qaida attacks on 9/11 were followed by a debate about whether the campaign to defeat Osama bin Laden and his network should be thought of as police work or war, I was surprised. The idea of a "war on terror" seemed obviously inappropriate, even as a metaphor. In its structure and modus operandi, al-Qaida and other terrorist networks were and are more like international criminal organizations -- drug smuggling or prostitution cartels, for example -- than like states. The U.S. military might supplement law enforcement efforts, if countries protected bin Laden, as the Taliban regime did in Afghanistan before it was deposed and as it now appears elements of the Pakistani government must have done for many years. But apart from raids like the one in which bin Laden was killed, the chief responsibility for identifying jihadist networks and disrupting planned acts of terrorism would lie with intelligence agencies and law enforcement officials.

It soon became clear that I did not understand my own country. In a remarkably short period of time, the right managed to persuade the American people to think of jihadist terrorism as war, not crime. Al-Qaida's transnational network of militants, and the imitators it inspired, was treated as though they were the equivalents of Nazi Germany or the Soviet Union. Instead of being treated as the equivalent of the terrorist Carlos the Jackal, bin Laden was promoted to the status of Hitler or Stalin.

The campaign to defend America and its allies against al-Qaida was a war. A Long War. A Global War on Terror. Or, on the theory that the Cold War was World War III, World War IV.

Nobody pushed the terrorism-as-war theme more than the neoconservatives. CNN reported in April 2003:

Former CIA Director James Woolsey said Wednesday the United States is engaged in World War IV, and that it could continue for years.

In the address to a group of college students, Woolsey described the Cold War as the third world war and said "This fourth world war, I think, will last considerably longer than either World Wars I or II did for us. Hopefully not the full four-plus decades of the Cold War."

He said the new war is actually against three enemies: the religious rulers of Iran, the "fascists" of Iraq and Syria, and Islamic extremists like al Qaeda.

As late as 2007, after American public opinion had turned against the debacles in Iraq and Afghanistan, Norman Podhoretz, the longtime editor of Commentary, the flagship neoconservative magazine, published "World War IV: The Long Struggle Against Islamofascism." Podhoretz argued that the U.S. probably should be fighting even more wars on even more fronts at the same time:

Consider: the campaign against al Qaeda required us to topple the Taliban regime, and we may willy-nilly find ourselves forced by the same political and military logic to topple five or six or seven more tyrannies in the Islamic world (including that other sponsor of terrorism, Yasir Arafat's Palestinian Authority). I can even go along with David Pryce-Jones in imagining the turmoil of this war leading to some new species of an imperial mission for America, whose purpose would be to oversee the emergence of successor governments in the region more amenable to reform and modernization than the despotisms now in place. Like Pryce-Jones, I can also envisage the establishment of some kind of American protectorate over the oil fields of Saudi Arabia, as we more and more come to wonder why 7,000 princes should go on being permitted to exert so much leverage over us and everyone else.

I still do not understand why the American elite and the American people went along with the efforts of the neocons to blow the necessary campaign against al-Qaida into a Thirty Years' or Hundred Years’ War against "Islamofascism" or "Islamism," a catch-all category that includes secular Baathists and Iranian Shia theocrats who despise Sunni religious militants like bin Laden and are despised by them in turn. But I understand the appeal of the World War IV theme to neoconservatives all too well, because two decades ago I was one of them.

In the 1980s, I was what was known as a Cold War liberal. I identified with former Kennedy-Johnson liberals like Daniel Patrick Moynihan and Nathan Glazer, who in my view were defending the New Deal tradition against the reactionary right and the radical left. When the Cold War ended, I sided with the neocons like Moynihan who thought the U.S. should scale back its foreign policy commitments, reform the culture of unnecessary secrecy without endangering legitimate secrets, and focus on neglected domestic priorities. This approach was compatible with the version of foreign policy realism promoted by the National Interest, the journal where I worked as executive editor with editor Owen Harries.

The National Interest was the sister publication of the Public Interest, the leading neoconservative public policy quarterly. Both were published by "the godfather of neoconservatism," the late Irving Kristol. Kristol was more sympathetic to realpolitik than most neoconservatives. Even so, I grew increasingly less comfortable as the neocons in the early 1990s expanded their alliance with the religious right, originally an alliance of convenience based on support for the right wing in Israel, into a "culture war" against liberalism as such.

I remember the day in early 1993 when I ceased thinking of myself as a neoconservative, even of a moderate kind, and started looking seriously for another movement and another job. Irving had returned from a conference in Germany and was asking Owen Harries and me whether we would be interested in publishing a talk he had given. The essay, published in the National Interest, was titled "My Cold War."

In the essay, Irving confessed that he had never really been interested in defeating the Soviet Union. The real enemy had been American liberalism, all along:

There is no "after the Cold War" for me. So far from having ended, my cold war has increased in intensity, as sector after sector of American life has been ruthlessly corrupted by the liberal ethos. It is an ethos that aims simultaneously at political and social collectivism on the one hand, and moral anarchy on the other. It cannot win, but it can make us all losers. We have, I do believe, reached a critical turning point in the history of the American democracy. Now that the other "Cold War" is over, the real cold war has begun. We are far less prepared for this cold war, far more vulnerable to our enemy, than was the case with our victorious war against a global communist threat. We are, I sometimes feel, starting from ground zero, and it is a conflict I shall be passing on to my children and grandchildren. But it is a far more interesting cold war -- intellectually interesting, spiritually interesting -- than the war we have so recently won, and I rather envy those young enough for the opportunities they will have to participate in it.

There are a few people on the American right who are interested in foreign policy for its own sake. But the majority of conservative pundits who write or talk about foreign policy, like Irving Kristol, are mainly interested in smearing Americans who disagree them with them as Fifth Columnists, traitors who are undermining America or Western Civilization or Democracy or whatever from within. Liberals are Enemies Within, in conscious or unconscious alliance with the Enemies Without.

That’s where World War IV came in, after 9/11. In order for the neocons and other conservatives to accuse American liberals of being fifth columnists, there had to be an external enemy outside America’s borders with four other columns. Unfortunately for the right, Gorbachev had, to use his phrase, deprived America of an enemy.

The end of the Cold War deprived the American right of an external enemy that it could use in guilt-by-association campaigns to smear fellow citizens who disagree with it on a variety of issues, foreign and domestic. In hindsight, it now seems clear to me that the post-1945 right was and is essentially McCarthyist. In the late 1940s and early 1950s there was a Soviet threat to the U.S. and its allies, and communist espionage in the U.S. was a genuine but limited problem. But McCarthy and his followers were interested in power politics or communism only to the extent that they could go after their real enemies, liberals and moderate conservatives. (Liberals themselves have succumbed to the temptation; during World War II, there was an equally unprincipled "Brown Scare" attempting to link various American conservatives and isolationists unjustly with Hitler and the Axis.)

9/11 fortuitously provided the American right with the external enemy that allowed it to go back into business demonizing the internal enemy, liberalism. And the idea of World War IV enabled the right once again to smear American liberals as defeatists or appeasers, if not traitors, in a struggle on the scale of the world wars and the Cold War.

Central to the rhetoric of American rightists, be they literate neocons or populist wingnuts like Glenn Beck, is the accusation that America is on the verge of destruction by powerful enemies without and traitorous or defeatist progressives within. In this political psychodrama, the identity of the foreign threat is secondary. If terrorists identifying themselves with Peru’s Sendero Luminoso had massacred Americans on 9/11, conservatives might well have declared war on "Latinofascism," called for the invasion of Cuba, Venezuela and other leftist Latin American regimes, and denounced cultural relativism and multiculturalism and the welfare state for weakening the will of Americans to resist the imminent overthrow of Western civilization by Latin American Maoism.

World War IV was never really about bin Laden or al-Qaida. It was always about American domestic politics. Whether or not al-Qaida fades away after the death of bin Laden, the right will continue to wage its American civil war, using World War IV as an excuse. Or maybe World War V or World War VI. Whatever.