A patriot's guide to still hating Obama for killing Osama 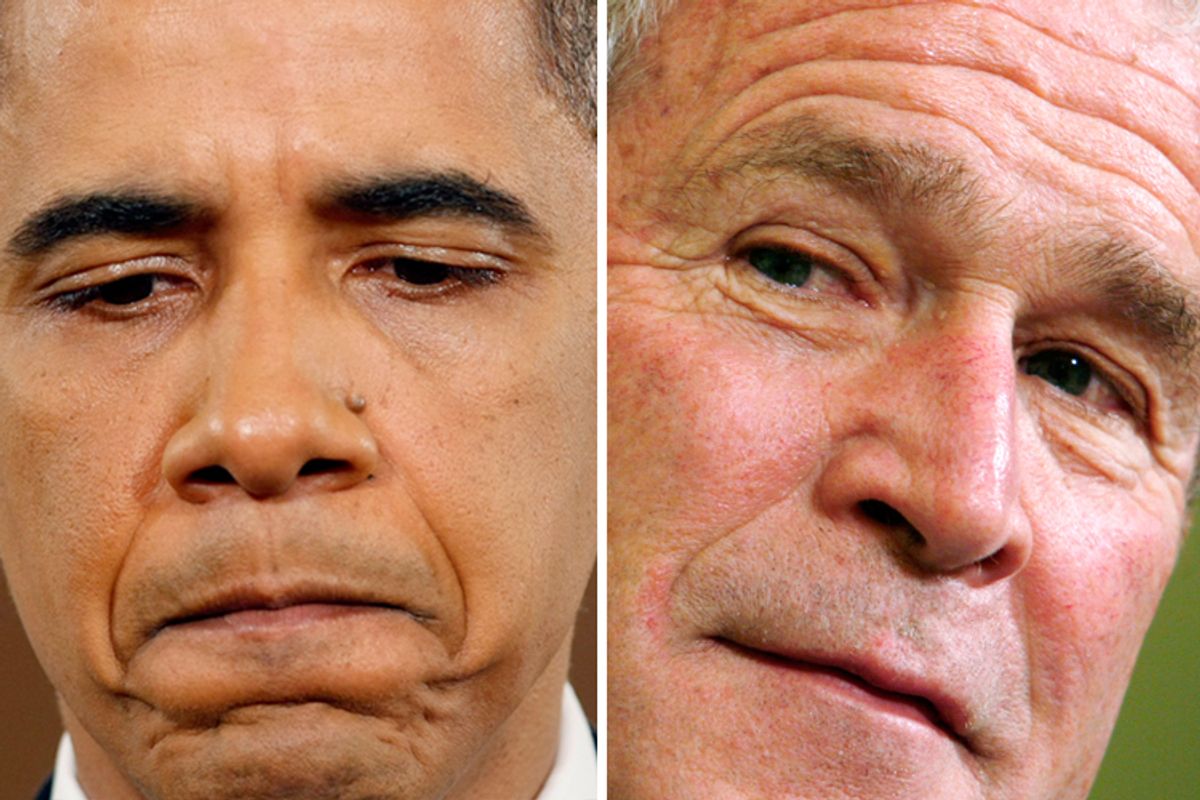 Osama bin Laden, the founder of al-Qaida and the mastermind of the 9/11 terrorist attacks, was recently killed by American commandos, which is, for Real American Patriots, a Good Thing. But Barack Obama is getting all the credit, which is, for said residents of the authentic portion of this glorious nation, decidedly a Bad Thing. How is a typically bloodthirsty right-winger supposed to revel in America's victory over an enemy while still detesting the socialist usurper in the White House who made this victory possible? It's easier than you might think. All you need -- as with most right-wing thought -- is a bit of cognitive dissonance. Here are your talking points:

This was all thanks to George W. Bush

Osama bin Laden was killed thanks to the resolve and fortitude of President George W. Bush. Pointing out that the Bush administration tried, failed, and then largely gave up on capturing bin Laden, is "politicizing the bin Laden kill." ("Politicizing" is when Democrats take credit for something good and popular.)

This was also thanks to torture

The United States doesn't torture. It's just a fact. Also, torture works. That is also just a fact. So what the Bush administration did was not torture, but also the Bush administration was justified in torturing because torture is how we found bin Laden. We totally waterboarded the hell out of terrorists until they told us what we wanted to know! (But also waterboarding is not such a big deal.)

(The fact that the information that eventually led to the identification of the courier that led us to bin Laden was obtained through non-enhanced interrogation, of course, is proof that Guantanamo must remain open forever.)

Liberals (and Obama) are not happy enough about bin Laden's death

As Christian Broadcasting Network correspondent David Brody already pointed out, Barack Obama did not even look very happy when he announced that Osama bin Laden was dead:

I know President Obama understands that getting Bin Laden doesn't mean an end to the war on terrorism but how about a smile? How about showing a little joy? How about a word or two saying something about how this is no doubt a happy or joyous occasion for Americans? We got nothing like that at all.

Obama did not smile in part because he was appeasing Arab thugs, but also because liberals hate it when America wins, because liberals hate America. It's true! As Jim Geraghty points out, various contributors to some pinko rag called Salon expressed feelings and opinions that fell short of unadulterated glee -- there were even reservations about whether or not this decade-long trillion-dollar campaign was completely worth it -- which is proof that squishy liberals are not as American as real Americans.

Bill Clinton is responsible for 9/11

So a Democratic president killed Osama bin Laden. So what? Osama bin Laden was only able to do 9/11 because of Bill Clinton, who was too busy renting out the Lincoln Bedroom to the hitman he hired to kill Vince Foster to bother to capture and kill bin Laden in the '90s. Everyone knows this.

Just like everyone knew, back when Bill Clinton was president, that his various "anti-terrorism" campaigns were naked dog-wagging attempts to distract from his many scandals.

I mean, he was a figurehead. Just one part of al-Qaida. Not even a very big part. Like the Queen of England, basically. Mostly symbolic.

Besides he was probably better off alive, because now he's a martyr. We should've just let him live in his stupid house. Obama ruins everything.

He should've been publicly defiled or something, because that's how America proves its superiority.

Did you know that Osama's been dead for years, kept on ice, until Obama needed a poll boost? Also he's not really dead, and also he's been dead since 2002. Also Obama didn't even want to kill Osama but the military made him. And Obama only did this to silence Donald Trump.